In game theory, minimax is a decision rule used to minimize the worst-case potential loss; in other words, a player considers all of the best opponent responses to his strategies, and selects the strategy such that the opponent's best strategy gives a payoff as large as possible.

The name "minimax" comes from minimizing the loss involved when the opponent selects the strategy that gives maximum loss, and is useful in analyzing the first player's decisions both when the players move sequentially and when the players move simultaneously. In the latter case, minimax may give a Nash equilibrium of the game if some additional conditions hold.

Minimax is also useful in combinatorial games, in which every position is assigned a payoff. The simplest example is assigning a "1" to a winning position and "-1" to a losing one, but as this is difficult to calculate for all but the simplest games, intermediate evaluations (specifically chosen for the game in question) are generally necessary. In this context, the goal of the first player is to maximize the evaluation of the position, and the goal of the second player is to minimize the evaluation of the position, so the minimax rule applies. This, in essence, is how computers approach games like chess and Go, though various computational improvements are possible to the "naive" implementation of minimax.

Intuitively speaking, the minimax (for player i) is one of two equivalent formulations:

Similarly, the maximin is defined as

which can be intuitively understood as either of:

where both players have a choice between three strategies. In such a payoff matrix, from the first player's perspective:

It is extremely important to note that

ui​​≤ui​​ i.e. the maximin is always at most the minimax.

This can be intuitively understood by noting that in minimax, player i effectively gets to choose his strategy after learning everyone else's, which can only increase his payoff.

In the above example, the maximin and the minimax are in fact equal. In such a case (which does not always happen!), the minimax strategy for both players gives a Nash equilibrium of the game.

This is especially important in zero-sum games, in which the minimax always gives a Nash equilibrium of the game, as the minimax and maximin are necessarily equal.

Let X,Y be two compact convex sets, and f:X×Y→R be a continuous function on pairs (x,y),x∈X,y∈Y. If f is convex-concave, i.e.

The application of the minimax theorem to zero-sum games is especially important, as it becomes equivalent to

For a zero-sum game with finitely many strategies, there exists a payoff P and a mixed strategy for each player such that

which is equivalent to establishing a Nash equilibrium.

It is important to note that the minimax strategy may be mixed; in general,

It is not necessarily the case that the pure minimax strategy for each player leads to a Nash equilibrium.

For example, consider the payoff matrix

is stable and represents a Nash equilibrium.

In combinatorial games such as chess and Go, the minimax algorithm gives a method of selecting the next optimal move. Firstly, an evaluation function f:P→R from the set of positions to real numbers is required, representing the payoff to the first player. For example, a chess position with evaluation +1.5 is significantly in favor of the first player, while a position with evaluation −∞ is a chess position in which White is checkmated. Once such a function is known, each player can apply the minimax principle to the tree of possible moves, thus selecting their next move by truncating the tree at some sufficiently deep point.

More specifically, given a tree of possible moves in which the leaves have been evaluated using the function f, a player recursively assigns to each node an evaluation based on the following: 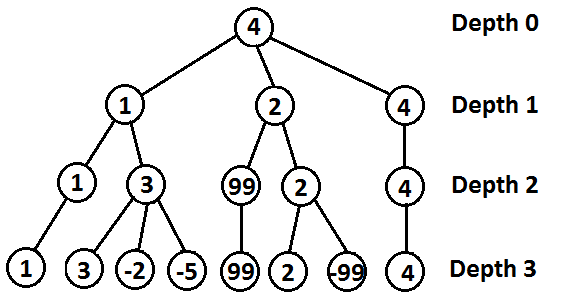 Of course, games like chess and go are vastly more complicated, as dozens of moves are possible at any possible point (rather than the 1-3 in the above example). Thus it is infeasible to completely solve these games using a minimax algorithm, meaning that the evaluation function is used at a sufficiently deep point in the tree (for example, most modern chess engines apply a depth of somewhere between 16 and 18) and minimax is used to fill in the rest of this relatively small tree.