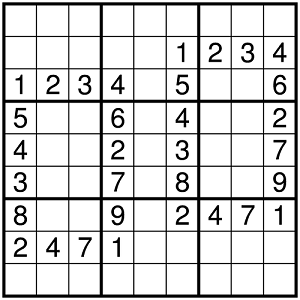 (The Art of Sudoku puzzle 3, by Thomas Snyder)

Puzzles come in many forms. A common way to make puzzles to be culture-neutral (does not depend on any knowledge of some culture or language) is to make them grid puzzles. These puzzles tend to have two parts, the rules and the actual puzzle in a grid. Sudoku is perhaps the most familiar example of grid puzzles.

There is no clear-cut definition of grid puzzles. Even the most natural definition of puzzles involving grids isn't very accurate, either. Grid puzzles usually have two parts: the rules part, which outlines the goal and the rules that the solver must follow, and the actual puzzle, which is presented in a grid, giving the name. The rules part is generally constant, which gives grid puzzles certain names (known as genres) depending on the rules; for example, a Sudoku puzzle is a puzzle where the rules part says "put 1-9 to the cells such that each row/column/box has one of each number," while a crossword puzzle is a puzzle where the rules part says "put a letter to each white cell such that each clue, reading across/down, is satisfied."

Since a grid puzzle requires both parts to form a complete puzzle, it's possible to give the rules in advance without spoiling the puzzle. In particular, it's possible to avoid any cultural requirements (knowledge of culture or language) in the puzzle itself, and since the rules can be given out, they can also be translated; this makes most grid puzzles culture-neutral. Sudoku is culture-neutral, since after you know the rules, you don't need any knowledge of culture or language to be able to finish a Sudoku, but crossword isn't. Word search is culture-neutral, since you don't need to know the meanings of the words. Elimination grid isn't, since you need to understand the language the facts are given in.

It's impossible to list every grid puzzle known to mankind, since there are so many, and it's very easy to construct a new one. Instead, this list tries to cover major genres.

Sudoku is a grid puzzle where the solver is presented by a 9×9 grid divided into nine 3×3 blocks, where some of the small cells have been filled with a digit between 1-9 inclusive. The solver needs to complete the grid, filling all remaining white cells with a single digit between 1-9 each, such that every row, column, and outlined 3×3 block has exactly one of each digit between 1-9.

There are endless variations of Sudoku that add to, modify, or remove from the rules. For example, diagonal Sudoku also requires each diagonal to have exactly one of each 1-9. Irregular Sudoku replaces the blocks with irregular shapes; this time, instead of each 3×3 block, each of these shapes needs to have exactly one of each 1-9. Non-consecutive Sudoku disallows two consecutive digits to share a side.

Crossword is a grid puzzle where the solver is presented by a grid where some cells are blackened. A contiguous line of two or more white cells running in the same row or column makes a word. Each word has an identifier (usually a small number at the top-left of the leftmost/topmost cell), and each identifier has a clue associated with it. The solver needs to fill a letter from the target alphabet (for example, in English crosswords, it's the standard A-Z) to each white cell, such that the letters making up a word satisfy the given clue. For example, a word of length nine that has an associated clue "smart; best website" can be filled by "BRILLIANT."

Crossword grids normally are just white and black cells. As a variation, the grid is entirely white instead, but there are thicker borders that separate words in the same line. Sometimes the grid can also be hexagonal.

A plain crossword isn't culture-neutral, since it requires knowledge of at least the language used. A way to make it more culture-neutral is math crossword, where the alphabet is the digits 0-9, and the clues are mathematical questions. To spice up math crosswords, one can use self-referential clues, where clues refer to the answers of other clues instead of standing on its own. Another attempt at making culture-neutral crosswords is a regular expression crossword.

Another variation is cryptic crossword, where the clues are cryptic. Generally cryptic clues are composed of two parts, a normal definition clue and a word puzzle clue. For example, "lap dancing friend" with three letters clues "PAL"; "friend" is its definition, while "lap dancing" is the word puzzle clue: "dancing" indicates that "lap" is to be anagrammed (its letters reordered).

Word search is a grid puzzle where the solver is presented by a grid full of letters, together with a word list. The solver has to find all words in the list in the grid. Words are always in a straight line, and generally can go in all eight compass directions (although some word searches only limit to the four cardinal directions or even just right/down).

Word search, on its own, isn't a particularly interesting puzzle. Ways to spice it up include adding words that aren't on the grid (the solver needs to identify these extraneous words), removing letters from the grid (the solver needs to identify what letters go in the missing spaces), and introducing new ways on how the words are located, for example by hiding them in a fractal grid.