An elimination grid is a tool to solve complex logic problems. It is useful when there is lots of information and works by converting data into a visual grid. 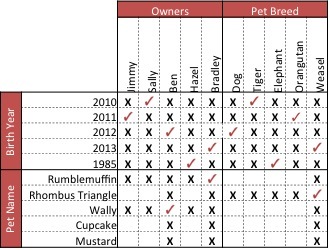 In basic logic puzzles, the sort found on many math and reasoning tests, a grid like the one to the right can be useful to eliminate possibilities, based on provided information.

Some well-known examples of these sorts of puzzles are Sudoku, Einstein's logic puzzle, and Cheryl's birthday. For instance, in Sudoku puzzles, an elimination grid can be used to determine what the right entry is: eliminating numbers 1-9 that have already been used across, down, and in the same box.

As the name suggests, when solving these types of problems, it is advisable (though not a necessity) to set up a grid. Typically, these puzzles have a description or a list of facts that describes a group of people or other objects. The puzzle then asks for the solver to uniquely match the people or objects to properties described in the list of facts.

We are then given information about which person likes which flavor and topping. For instance, we might be told that Bethany likes chocolate ice cream, but doesn't like nuts. With this in mind, we can check Bethany off as the chocolate lover, while crossing off every other flavor for Bethany and every other name for chocolate. Furthermore, we can mark Bethany and the chocolate-lover off as candidates for liking nuts.

Next, we might be told that Carly doesn't like strawberry or vanilla ice cream, allowing us to eliminate her as candidates for those flavors, revealing that she must be the caramel lover.

With the remaining information, see if you can finish off the puzzle:

In making a grid we use the columns and rows effectively so that every possibility in the puzzle is identified. Start with one of the easiest clues that gives you a simple fact matching two pieces of information together. For instance, you have the information "Sam has a red ball." Then find the row or column of your grid labeled "Sam," and follow it until you get to a square underneath the column or row labeled "red." Highlight that point to show that Sam and the red ball are connected. Let us try another example now.

What is the profession of A's father?

Answer: This is how the grid will look: 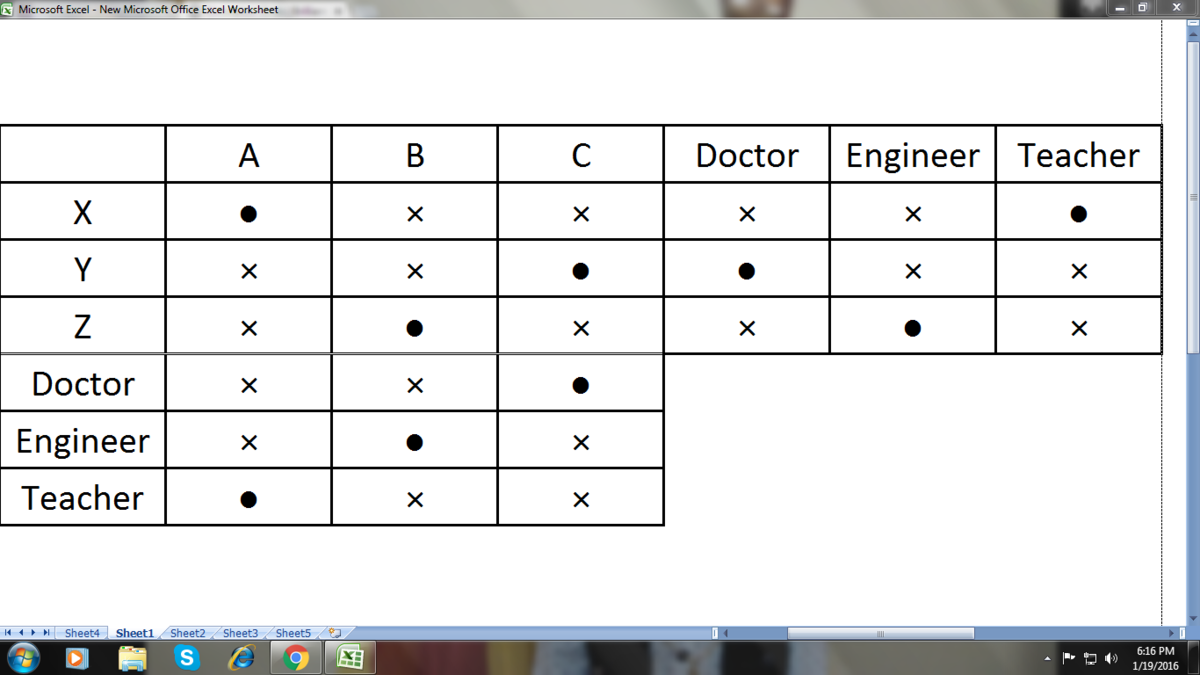 Then step by step cross out squares that are ruled out from the hints provided. Harder problems have numerous properties, in which you have to fill out a much more complicated matrix.

After fixing their microverse battery, Rick, Morty, and Summer go out to eat ice cream. They each like one distinct flavor: Pink Peppercorn, Chocolate, or Green Tea.

Aaron, Calvin, David, and Peter each live in one of 4 adjacent townhouses in a row, each of a single color. 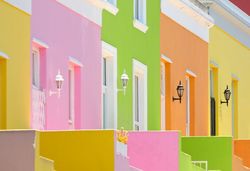 Each owns one pet and imbibes one kind of drink.

Who owns the fish?

Note: Color of residences as shown in photograph have nothing to do with this problem. Also, any pet "owned" is presumed to live in the same place as the owner lives.

Four men--A, B, C, and D--are a sales executive, an accountant, a lawyer, and a doctor, NOT in the same order. They are accompanied by their children--P, Q, R, and S (also not in same order)--of which two are boys and two are girls, to a magic show. Each person is with one child.

Based on this data, answer the questions below:

Sandip, Tracy, Jamal, and Sheng are best friends who work together everyday at a banana stand. Since they are so close, their happiness on any given day depends on the happiness of the other three people on the previous day. Suppose they behave as follows: 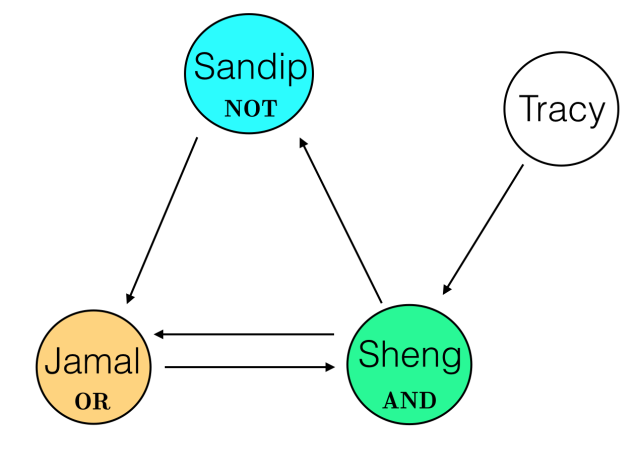 Carmen has decided that the inside of her home needs to be refurnished, so she went out to buy some cans of paint (red, blue, green, yellow, indigo) so that she can redecorate five rooms over the course of the next five weeks. Every week she intends to paint a different room such that each room will be painted with a different color. Using the information given below, find the color that will be painted on the hallway.

Mr and Mrs Tan have five children: Alfred, Brenda, Charles, Darius, and Eric who are 18, 17, 16, 15 and 14 (not in this order). Each of the five has a distinct favorite color from the list (blue, green, yellow, orange, red), not necessarily in the same order.

What is Alfred's favourite colour?

In this section we will be solving puzzles by applying the same concepts from K-level thinking. If you are not familiar with that concept, please see the main article first, K-level thinking.

When solving K-level puzzles, it is also possible to create gridlike tables and work our way through to obtain the answer. Because it is difficult to explain this without any question in mind, let us jump into a sample question:

Ed thinks of two positive integers, he then secrely told Fred one number and Greg another number separately. Ed then told both Fred and Greg that the sum of their numbers is 2 or 4. If Fred told Greg that he (Fred) didn't know Greg's number, can you deduce what Fred's number is?

For starters, we need to know what the possible values are for Fred's and Greg's numbers. Let F and G denote the possible values for Fred's number and Greg's number, respectively. Because we are told that the sum of their numbers is 2 or 4, it follows that F+G=2 or F+G=4 must be fulfilled. So F can take values 1, 2, and 3, and similarly, G can take values 1, 2, and 3 as well. Let us construct the outline of the grid first:

Now if Fred's number is 3, then the sum of their numbers must exceed 2, so the only possible number for Greg to have is 1. However, this is impossible because Fred already knows his number and if his number is indeed 3, then he can automatically deduce the fact that Greg's number is 1, which contradicts the fact that Fred says he doesn't know about Greg's number. Hence Fred can't have the value of 3. So, let's mark an X in the table as follows:

Similarly if Fred's number is 2, then the sum of their numbers must exceed 2, so the only possible number for Greg to have is 2. However, this is impossible because Fred already knows his number and if his number is indeed 2, then he can automatically deduce the fact that Greg's number is 2, which contradicts the fact that Fred says he doesn't know about Greg's number. Hence Fred can't have the value of 2. So, let's add another X to the table:

From here, the only possible solution for Fred's number is F=1. Hence the following table:

Now is it possible for Fred to figure out what Greg's number actually is if Greg makes the additional claim that his number is not the same as Fred's? Yes it is! For starters, Greg's number can't be 1 because his number is different from Fred's. Hence the following table:

So we have finally deduced what their numbers are!

Now, doing the same kind of reasoning as above, can you solve the following example?

Difficulty increases with the number of rows and columns. It could also be unclear how one should choose to present the data and follow the argument. An excellent example is Josh Silverman's solution to the viral problem Cheryl's Birthday. 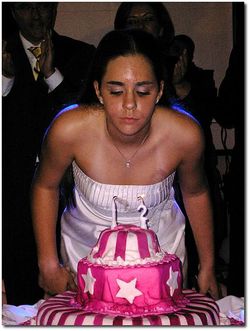 Albert and Bernard just became friends with Cheryl, and they want to know when her birthday is. Cheryl gives them a list of 10 possible dates:

Cheryl then tells Albert and Bernard separately the month and the day of her birthday respectively.

So, when is Cheryl's birthday?

Four friends have been identified as suspects in a car theft. One of them really stole the car, and the following are the statements they made to the investigating authorities:

If the authorities also know that exactly one of the four suspects is telling the truth, who did it?

Set up a truth table for all the possibilities as follows:

Thomas is telling the truth: This results in both Simon and Kim being guilty, which can't be.

Simon is telling the truth: This results in both Harper and Kim being guilty, which can't be.

Harper is telling the truth: This means that Kim is the criminal, which is the correct answer. □​

Both Saeed and Grover have the above information and they are both perfect in their logic. Then the following conversation occurs:

From Saeed's first statement, we learn that all splittings of the sum in f1​ and f2​ satisfy the above conditions. This implies that the sum is odd (for Goldbach’s conjecture that all even numbers except 2 and 4 are the sum of two primes, holds below 100). Finally the sum is not of the form f1​+f2​=q+2, where q is a prime number and the sum is less than 50 (since 53 is the smallest prime greater than 50).

Grovers statement "Now I also know f1​ and f2​!" implies he now knows that sum is one of the values listed above. If this enables him to deduce f1​ and f2​, then, of the eligible factorizations of f1​ times f2​, there must be precisely one for which the sum of the factors is in the list. Now, we make the following observation:

Six race car drivers—Alice, Bob, Carly, Dave, Evelyn, and Frank—have just finished a race. A description of the results are as follows:

In what place did Dave finish?

Pop Quiz! Submit your answers, in order, to Questions 1-4.

Q1. Which is the first question where c) is the correct answer?

Q2. Which is the first question where a) is the correct answer?

Q3. Which is the first question where d) is the correct answer?

Q4. Which is the first question where b) is the correct answer?

Reference from other sites: