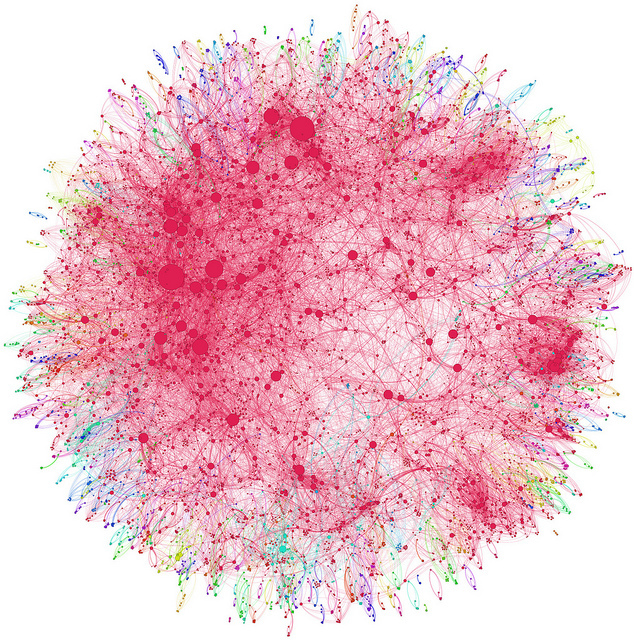 A social network graph is a graph where the nodes represent people and the lines between nodes, called edges, represent social connections between them, such as friendship or working together on a project. These graphs can be either undirected or directed. For instance, Facebook can be described with an undirected graph since the friendship is bidirectional, Alice and Bob being friends is the same as Bob and Alice being friends. On the other hand, Twitter can be described with a directed graph: Alice can follow Bob without Bob following Alice.

Social networks tend to have characteristic network properties. For instance, there tends to be a short distance between any two nodes (as in the famous six degrees of separation study where everyone in the world is at most six degrees away from any other), and a tendency to form "triangles" (if Alice is friends with Bob and Carol, Bob and Carol are more likely to be friends with each other.)

Social networks are important to social scientists interested in how people interact as well as companies trying to target consumers for advertising. For instance if advertisers connect up three people as friends, co-workers, or family members, and two of them buy the advertiser's product, then they may choose to spend more in advertising to the third hold-out, on the belief that this target has a high propensity to buy their product.

Social scientists can also use social networks to model the way things made by people connect. Pages on the internet and the links between them form a social network in much the same way as people form networks with other people. Also, counter-intelligence agencies have used cell-phone data and calls to map out terrorist cells.

The image to the right shows the connections between different physicians who co-author papers on hepatitis C, for instance showing that two people who coauthored one paper, also mutually coauthored separate papers with another physician.

To simulate how a social network forms, mathematicians use random graphs that model how people make connections as they enter the network.

Random graphs are developed by adding nodes to the graph one by one and randomly adding edges between nodes according to a probabilistic rule. Different choices for the edge-adding rules result in graphs with very different structure. The simplest type of random graph is called an Erdos-Renyi graph. When each node is added, there is a fixed probability p that any given possible edge between it and another node is added. This means that any two people are equally likely to be connected as any two other people, and having a common connection doesn’t increase the chance that you are also connected to each other. This is very different from what we observe in real social networks, where people tend to cluster together.

We call a friendship island (FI) a group of people such that everyone in the FI can reach anyone else in the FI by passing a note through mutual friends. If two people cannot send notes through a series of mutual friends, they must be in different FI.

In real life, people that have more friends are more likely to get more friends. This behavior is known technically as "preferential attachment," or informally as the "rich get richer effect." The simplest model that captures this feature is called a Barabasi-Albert graph. A Barabasi-Albert graph begins with a set of N completely connected nodes. Every time a node is added, a fixed number m of edges connected to that node are also added. (In contrast, the Erdos-Renyi model adds a variable number of edges at each step.) These nodes connect to other nodes with probability directly proportional to the number of edges the other node already has. This number is known as the degree ki​ of node i. Specifically, the probability pi​ of connecting to node i is given by 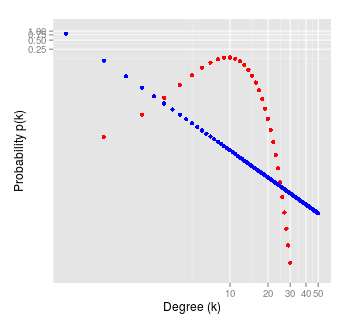 The denominator is simply the total degree of all nodes in the graph. Note that this is equal to twice the total number of edges, since each edge is counted once for each endpoint.

Functions of the form p(k)∝k−c, where c is a constant, are called power laws. Networks with power law degree distributions are often also called scale-free. This is because they look the same at all magnitudes. If p(k)∝k−c, then multiplying k by a constant a gives p(ak)∝(ak)−c=a−ck−c∝k−c. The scale factor a doesn’t change the shape of the distribution. In this way, social networks are like fractals. When you zoom in or out on the network, it looks roughly the same.

Social networks tend to be relatively small. It only takes a couple friends of friends to get to just about everyone you'll meet. One measure of the size of a graph is the average path length between any two points in the network. The path length between two nodes in a graph is the minimum number of edges that would need to be crossed in order to get from one node to the other.

Similarly, in mathematics, a mathematician's Erdos number is the path length between them and famous mathematician Paul Erdos in a graph where edges represent co-authorship. The Erdos-Renyi random graph described above is named after Paul Erdos.

The average path length in a Barabasi-Albert graph grows proportional to log(N), the logarithm of the number of nodes in the network. This means that the distance between nodes grows very slowly as more nodes are added. In the real world, though, the average distance can even shrink while the network grows.

Social networks with power law degree distributions have the peculiar feature that for most nodes in the network, the friends of that node have on average more friends than the node itself [3]. This result, known as the Friendship Paradox, arises because nodes will preferentially associate with nodes that already have a high degree.

Researchers have also found a Generalized Friendship Paradox in real-world social networks that extends to even more properties, like wealth and happiness. A person’s friends are, on average, richer and more happy than they are [4]. Unlike the Friendship Paradox, this is not a feature of any scale-free network, since it talks about properties other than those encoded by the network. However, it reflects something about the way people interact in real life. 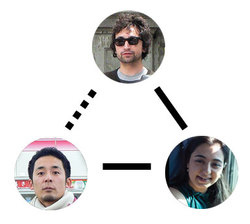 Ever wonder how Facebook suggests "People you may know"? One of the first (and simplest) algorithms that is used, is to look for strangers with whom you have many mutual friends.

For example, if you and Colin are not friends on Facebook yet, but both of you are friends with Belinda, then {you, Belinda, Colin} form a Friend Suggestion Triangle (FST). The more FST's that exist, the more strangers Facebook can suggest with greater confidence that you might know them.

Out of a group of 10 people, what is the maximum number of FST's that exist? 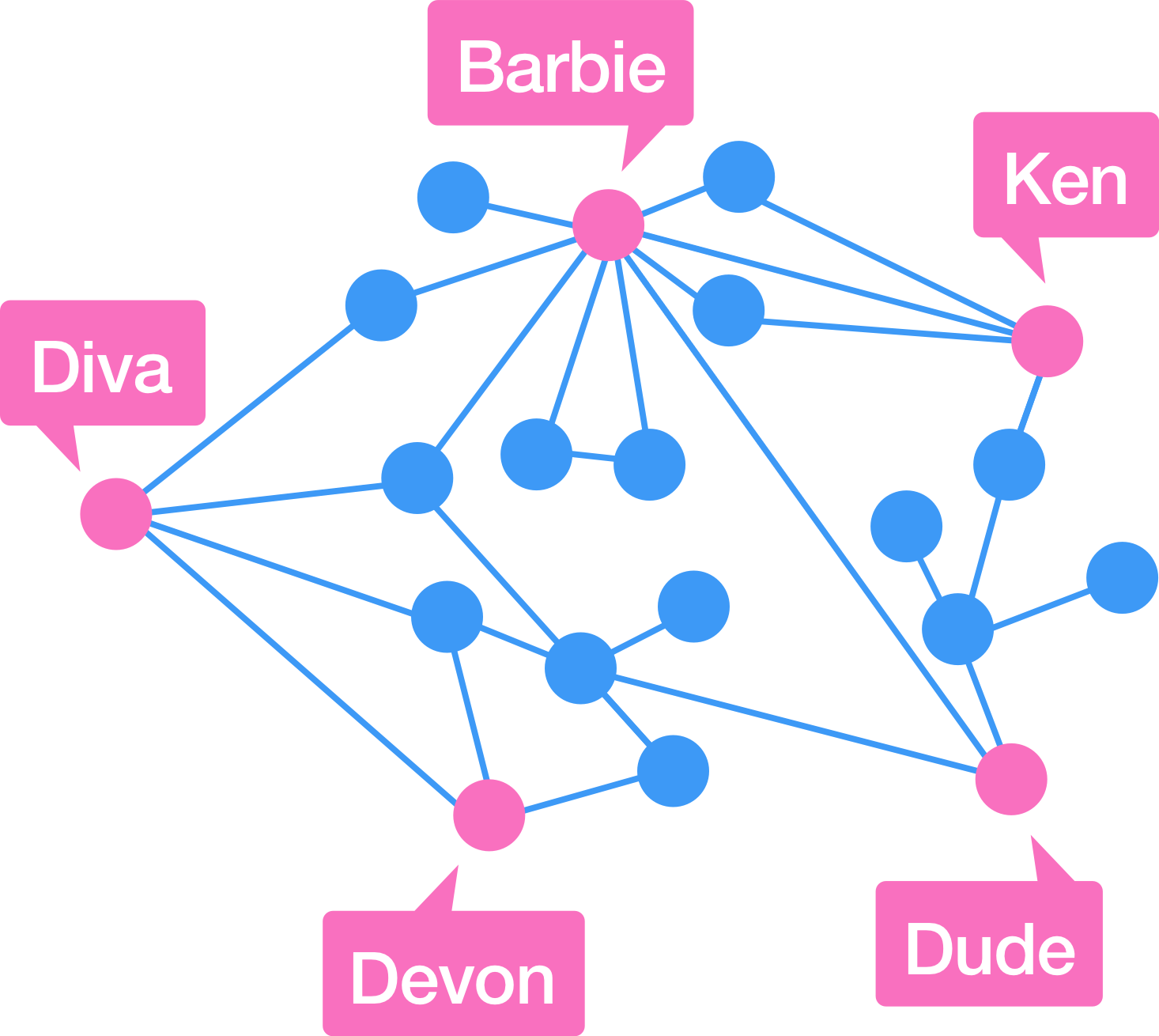 Here is a network graph constructed with data from Facebook of 20 people and all of the mutual friendship connections among them. Clearly Barbie has the most friends to invite to her parties (9), but if invitations go out not only to friends but also to all friends of friends, then whose party will have the most invites?

[4] How The Friendship Paradox Makes Your Friends Better Than You Are. MIT Technology Review. https://www.technologyreview.com/s/523566/how-the-friendship-paradox-makes-your-friends-better-than-you-are/ Retrieved February 17, 2016.