Sphere packing is the problem of arranging non-overlapping spheres within some space, with the goal of maximizing the combined volume of the spheres. In the classical case, the spheres are all of the same sizes, and the space in question is three-dimensional space (e.g. a box), but the question can be extended to consider different-sized spheres, higher (or lower) dimensions, or different types of shapes (e.g. a tetrahedron).

The problem is famous for being very natural and seemingly simple, but very difficult to even approach in a rigorous sense. In fact, it took nearly 400 years for the problem to be solved even in the three-dimensional case, and that was only possible through the use of massive computing power; the resulting data comprises over three gigabytes.

The problem of sphere packing is notable for being quite visible in everyday life; many grocery stores, for instance, stack fruit (oranges in particular) in a pyramidal pattern that illustrates a possible sphere packing.

In fact, the origin of the problem is quite similar: Sir Walter Raleigh, on one of his expeditions, asked a mathematician friend what the most efficient way of stacking the cannonballs he had on the ship was. The mathematician realized he couldn't answer the question, and passed it along to Johannes Kepler (better known for his work in astronomy).

Kepler conjectured that the "obvious" packing--the orange-stacking method--was in fact the best possible, and supported this by comparing it to some other basic strategies. However, approaching the problem proved difficult, and it was not until Gauss that major progress was made. 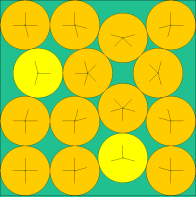 A (very) irregular, but optimal, packing of 15 circles into a square

The next major breakthrough came in 1953 when Laszlo Toth reduced the problem to a (very) large number of specific cases. This meant that, like the four color theorem, it was possible to prove the theorem with dedicated use of a computer. Still, coming up with the strategy to perform the computation took another 41 years when Hales developed an algorithm that he spent four more years executing. A 250-page paper and over 3 gigabytes of data later, Kepler's conjecture was finally proved.

The problem of sphere packing is best understood in terms of density: rather than trying to determine how many spheres can fit into a specifically sized box, the more interesting question is how much of 3-D space can be filled with spheres (in terms of volume). More formally, the density of a sphere packing in some finite space is the fraction of the space that can be filled with spheres. As the last section showed, this can lead to strange optimal tilings when the space is of a specific size, so the more interesting question arises when considering how the density changes as the space gets bigger and bigger; in a formal sense, the goal is to find the limit of the densities of the optimal sphere packing of an n×n×n box, as n tends to infinity.

A natural strategy is to choose a "small" arrangement and repeat it over and over again, attempting to do something similar to tessellating the plane. More formally, a lattice arrangement (or a regular arrangement) is one where the centers of the spheres require only n vectors to define completely (in the n-dimensional case; in the case of spheres, n=3). These arrangements are periodic, meaning that they repeat.

An irregular arrangement is one in which the centers of the spheres do not form a lattice; in some sense, they appear to be "randomly" spread about.

Because of the symmetry and regularity, lattice arrangements are much easier to analyze than irregular ones. However, especially as irregular arrangements are optimal for some small cases, the possibility that one is optimal in the limit case cannot be immediately ruled out.

The simplest version of the problem is the reduction to two dimensions, where the goal is to tile the plane with circles in the such a way that maximizes density.

A very natural approach is to arrange the circles in a hexagonal pattern, as shown: 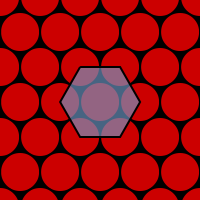 where the centers of the circles essentially tessellate the plane with equilateral triangles. It is worth noting that this is an example of a lattice arrangement, as it is completely defined by the vectors (0,1) and (21​,23​​) (this means that any linear combination of these vectors is the center of a circle).

The density of the hexagonal circle arrangement is

Interestingly, this is a low number compared to other shapes; for instance, the pentagon, which does not tessellate the plane, has a packing density of at least 35−5​​≈0.9213: 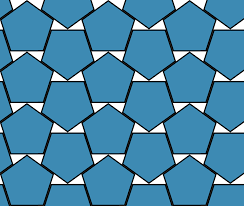 However, it is not the "worst" shape to tile the plane with. Though the exact worst shape is not known, the smoothed octagon is conjectured to be the worst: 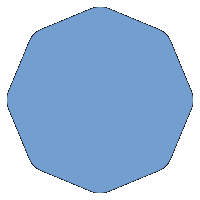 Surprisingly, this turns out to be a very difficult problem to solve as well, despite the clear intuition of which arrangement is best. It was not until 1940 that the hexagonal tiling was proved to have maximum density, though it was shown to have highest density among all lattice tilings as early as 1773.

What is the greatest number of balls of diameter 1 that can be placed in a 10×10×1 box?

Proving that the hexagonal tiling is optimal requires some definitions, but is not difficult in principle. Given a set of points in the plane, a triangulation is a set of triangles such that

A Delaunay triangulation does not necessarily exist for all sets of points, nor is it necessarily unique. But in this case, the set of points is the set of centers of the circles in a maximal optimal packing (and thus have a pairwise distance of at least 2), and this is enough to guarantee that a Delaunay triangulation exists. Here, a maximal optimal packing means no points can be added to the set; otherwise, the density could be increased. 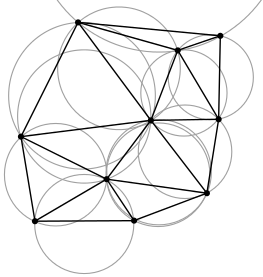 In a Delaunay triangulation of a maximal circle packing, the largest angle θ of any triangle satisfies

Proof: Since the angles of a triangle sum to π, the left-hand inequality is obvious; the maximum of a set must be at least its average.

However, this implies that the circumcenter O of ABC can be added to the set, contradicting its maximality. So, θ<32π​ as desired. □​

Now, consider the portion of a triangle ABC that is taken up by circles. The circle at A takes up π⋅2π∠A​=21​∠A area, and analogously the circles at B,C take up 21​∠B,21​∠C area. So the density of the triangle is

Furthermore, equality holds only when AB=BC=2 and ∠B=3π​ for all triangles, meaning that every triangle in the triangulation is equilateral. This means that the hexagonal lattice is optimal, as desired.

In the 3-D case, again the "natural" strategy wins out, but it is significantly more difficult to demonstrate. This natural strategy works as follows:

At the third step, there is a choice to be made: the spheres on layer 3 can be placed in the same positions (but moved upwards, obviously) as the spheres on layer 1, or they can offset slightly so that the spheres on layer 4 will be placed in the same positions as layer 1 (or 2, potentially). This means that there are three different hexagonal planes of spheres. If they are called A, B, and C, any sequence of As, Bs, and Cs such that no adjacent letters are the same (e.g. "ABCABC...", "ABCBABCBA...", etc.) will result in an analogously tightly-packed structure, and in fact all such packings are optimal.

The density of the optimal sphere packing is

Extremely recently (as of 2016), the sphere packing problem has been solved in even higher dimensions: 8 and 24. These may seem like arbitrary numbers, but in fact they are not; precisely these dimensions allow for exactly the extra structure needed to tightly pack additional "oranges" into the extra dimensions in such a way that the fit is "tight." This sounds ambiguous largely because it is; visualization in 4 dimensions is essentially impossible, let alone 24.

Amusingly, this result improves on a prior estimate that showed the best possible sphere packings were at most 10−25 denser than the best-known bounds. That is, the error in the best-known packings was at most

which is a remarkably tight bound.