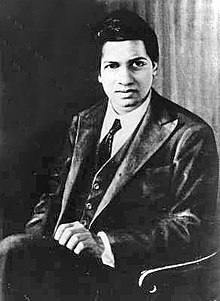 Srinivasa Ramanujan (1887-1920) was an Indian mathematician who made great and original contributions to many mathematical fields, including complex analysis, number theory, infinite series, and continued fractions. He was "discovered" by G. H. Hardy and J. E. Littlewood, two world-class mathematicians at Cambridge, and enjoyed an extremely fruitful period of collaboration with them from 1914 to 1919. Unfortunately, his mathematical career was curtailed by health problems; he returned to India and died when he was only 32 years old.

Hardy, who was a great mathematician in his own right, recognized Ramanujan's genius from a series of letters that Ramanujan sent to mathematicians at Cambridge in 1913. Like much of his writing, the letters contained a dizzying array of unique and difficult results, stated without much explanation or proof. The contrast between Hardy, who was above all concerned with mathematical rigor and purity, and Ramanujan, whose writing was difficult to read and peppered with mistakes but bespoke an almost supernatural insight, produced a rich partnership.

Since his death, Ramanujan's writings (many contained in his famous notebooks) have been studied extensively. Some of his conjectures and assertions have led to the creation of new fields of study. Some of his formulas are believed to be true but as yet unproven.

There are many existing biographies of Ramanujan. The Man Who Knew Infinity, by Robert Kanigel, is an accessible and well-researched historical account of his life. The rest of this wiki will give a brief and light summary of the mathematical life of Ramanujan. As an appetizer, here is an anecdote from Kanigel's book.

This is not the most illuminating answer! If we cannot duplicate the genius of Ramanujan, let us at least find the solution to the original problem. What is x?


Bonus: Which continued fraction did Ramanujan give Mahalanobis?

This anecdote and problem is taken from The Man Who Knew Infinity, a biography of Ramanujan by Robert Kanigel.

Many of Ramanujan's mathematical formulas are difficult to understand, let alone prove. For instance, an identity such as

is not particularly easy to get a handle on. Perhaps this is why the most famous mathematical fact about Ramanujan is trivial and uninteresting, compared to the many brilliant theorems he proved.

The story goes that Hardy was visiting Ramanujan in the hospital, and remarked offhandedly that the taxi he had taken had a "dull number," 1729. Instantly Ramanujan replied, "No, it is a very interesting number! It is the smallest positive integer expressible as the sum of two positive cubes in two different ways."

Hardy and Wright proved in 1938 that for every n, there is a positive integer Ta(n) that is expressible as the sum of two positive cubes in n different ways. So Ta(2)=1729. (The value of Ta(2) had been known since the 17th century, which is in some sense characteristic of Ramanujan as well: as he was largely self-taught, he was often rediscovering theorems that were already well-known at the same time as he was constructing entirely new ones.) The numbers Ta(n) are called taxicab numbers in honor of Hardy and Ramanujan.

Ramanujan developed several formulas that allowed him to evaluate nested radicals such as 3=1+21+31+4⋯​​​​. This is a special case of a result from his notebooks, which is proved in the wiki on nested functions.

He also contributed greatly to the theory of continued fractions. One of the identities in his letter to Hardy was 1+1+1+⋯e−6π​e−4π​e−2π​=⎝⎛​25+5​​​−21+5​​⎠⎞​e2π/5. This and several others along these lines were among the results that convinced Hardy that Ramanujan was a brilliant mathematician. This result is in fact a special case of the Rogers-Ramanujan continued fraction, which is of the form R(q)=1+1+1+⋯q3​q2​q​q1/5​ and is related to the theory of modular forms, a deep branch of modern number theory.

Ramanujan's work with modular forms produced the following celebrated divisibility results involving the partition function p(n): p(5k+4)p(7k+5)p(11k+6)​≡0(mod5)≡0(mod7)≡0(mod11).​ Ramanujan commented in the paper in which he proved these results that there did not appear to be any other simple results of the same type. But in fact there are similar congruences of the form p(ak+b)≡0(modn) for any n relatively prime to 6; this is due to Ken Ono (2000). (Even for small n, the values of a and b in the congruences are quite large.) The topic remains the subject of much contemporary research.

The Rn​ are called Ramanujan primes.

The sum cq​(n) of the nth powers of the primitive qth roots of unity is called a Ramanujan sum. It can be shown that these are multiplicative arithmetic functions, and in fact that cq​(n)=ϕ(dq​)μ(dq​)ϕ(q)​, where d=gcd(q,n), and μ and ϕ are the Mobius function and Euler's totient function, respectively.

Ramanujan found nice infinite sums of the form ∑an​cq​(n) or ∑aq​cq​(n) representing the standard arithmetic functions that are important in number theory. For instance, d(n)=−2γ+ln(n)1​q=1∑∞​qln(q)2​cq​(n), where γ is the Euler-Mascheroni constant.

Another example: the identity q=1∑∞​qcq​(n)​=0 turns out to be equivalent to the prime number theorem.

Sums involving cq​(n) are known as Ramanujan sums; these were also used in applications including the proof of Vinogradov's theorem that every sufficiently large odd positive integer is the sum of three primes.

Ramanujan's τ function is defined by the formula n=1∑∞​τ(n)qn=qn=1∏∞​(1−qn)24 and is related to the theory of modular forms.

Ramanujan conjectured several properties of the τ function, including ∣τ(p)∣≤2p11/2 for all primes p. This turned out to be an extremely important and deep result, which was proved in 1974 by Pierre Deligne in his Fields-medal-winning proofs of the Weil conjectures on points on algebraic varieties over finite fields.