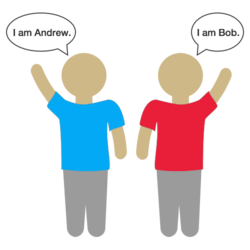 If we know that at least one of them lied, then what color shirt is Andrew wearing?

Each truth-teller and liar puzzle lends itself to a variety of possible solutions, from casework to truth table considerations to contradiction shortcuts.

One approach to solving truth-tellers and liars problems is with systematic casework. Specifically, one can simply consider each possible "case," and see if this case is possible according to the given information. For example, consider this solution to the problem above using systematic casework.

There are 4 cases to consider depending upon who lied or spoke the truth:

Case 1: Both spoke the truth. Since one of them lied, this is not possible.

However, when using systematic casework, it's important to try to have as few cases as possible. For example, instead of working through the four cases of truths and lies, it might be simpler to consider the two cases of which person is which:

Case 1: Andrew is in the blue shirt and Bob is in the red shirt. Both of the statements would be true, which is not possible.

Case 2: Bob is in the blue shirt and Andrew is in the red shirt. Both of the statements would be false, which is possible. Thus, Andrew is wearing red.

There are 3 boxes, exactly one of which has a car. You can keep the car if you pick the correct box!

On each box there is a statement, exactly one of which is true.

Which box has the car?

If exactly one of these statements is false, which statement is false?

A. Statement D is true.

B. Statement A is false.

C. Statement B is false.

Since one of the statements is false, it suffices to consider 4 cases, each case assuming one of statements to be false and then checking if this assumption is consistent with other statements or not.

Case 1: Statement A is false. This implies Statement D is false. Since no more than one statements can be false, this assumption is wrong.

Case 2: Statement B is false. This leads to conclusion that A is true, D is true, and C is true. (Looks good)

Case 3: Statement C is false. This results in conclusion of truthfulness of B, and thus fallacy of A, which is not possible.

Case 4: Statement D is false. It signifies that C is false, which is invalid.

So the statement which is wrong is Statement B. □​

In the above example, all possible cases were enumerated and impossible cases were eliminated. However, in more difficult problems, it may be infeasible to work through every single case. Can you cleverly pare down the number of cases to check in the following problem?

Chris Ben Emma It was no one! Alan Dave

Alan, Ben, Chris, Dave and Emma are eating a big cake. After eating, there was one slice left, and they decided to leave it for Frank but someone ate it! Frank knows that these 5 people are each telling one truth and one lie:

Who ate the last slice of cake?

Though it is always possible to do casework to determine the truth of each claim, it is not always optimal or practical to go through all of the cases one by one; there might be far too many cases to do this work by hand, and some of the cases may even be quite similar. It is always a good idea to keep our ideas as concise as possible while still conveying the logic clearly. If possible, it is recommended to find shortcuts and figure out how to shorten our solution. Three of these common shortcuts are

Technique 1: Proving the correctness of our answer by contradiction.

Rather than simply enumerating cases via the possible truth values, it is sometimes useful to enumerate cases by conditioning on another constraint given in the problem. One way to spot problems like these is to find terms like "at least," "at most," or "exactly" used in all the statements.

If only one child is telling the truth, can you determine how many of Mrs. Jacobs' children failed algebra?

After exhausting through these 5 scenarios, we know that only the fourth scenario is possible, or simply put, her first child is telling the truth, and thus only one of her children failed algebra. □​

Condition on specific constraints as you try solving these problems:

Mr. Robin asks his 5 students whether they studied maths yesterday.

green one yellow one red one black one 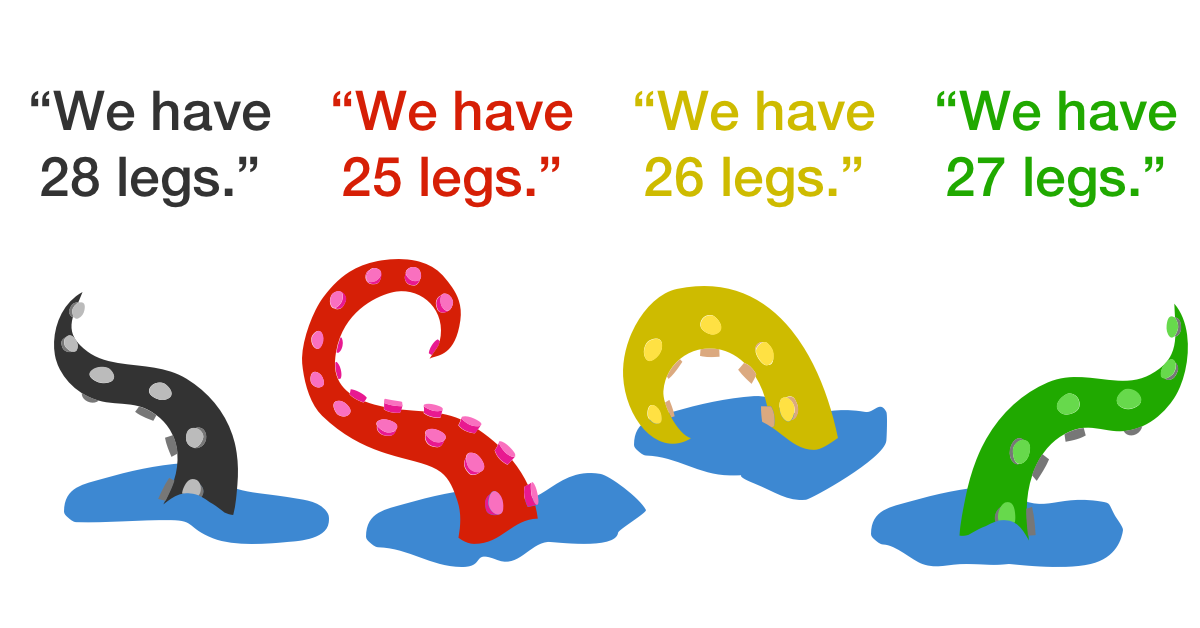 Who spoke the truth?

As mentioned above, it is not always ideal to solve problems like these by casework. But sometimes, it's easy to spot contradictory statements. For example:

Suppose there are 3 people A, B, and C, each of whom makes these claims:

Given that only one of them is telling the truth, can you determine who is guilty? 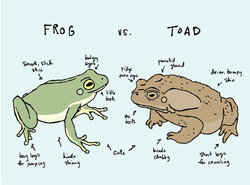 Four amphibians, Brian, Chris, LeRoy, and Mike live together in this swamp, and they make the following statements:

How many of these amphibians are frogs?

The trick for these types of problems is to identify which pairs of statements can't be simultaneously true. Here's another problem where this technique applies:

On the island of Knights and Knaves, I met three people A, B, and C, one of whom is a knight, another is a knave, and the other is a spy. The knight always tells the truth, the knave always lies, and the spy can either lie or tell the truth.

Who is the spy?

Sometimes, a truth-tellers and liars problem can involve one or more self-referential statements. In other words, the statement makes a claim about its own truth or falseness. Here is a simple example to clarify this idea:

A logical statement cannot be both true and false, so the statement must be false, which is consistent with the fact that it falsely claimed to be true (as well as false). □​

The simplest way to evaluate a self-referential statement is to consider the cases where it is true or false, and then to consider if those would be logical (e.g., non-contradicting or otherwise absurd). In the previous problem, considering the case where the statement is true immediately shows this to be impossible (since the statement claims to be false). The following problem can be solved using this same idea of casework:

If these statements are both logical, then does Superman exist?

Sometimes, a statement cannot be made logically, and is simply impossible/logically inconsistent.

When a problem statement allows us to pose a question to the truth-tellers and liars, we examine how much information is needed as well as how to obtain that amount of information in the allotted number of questions.

Common techniques to solve these problems include

Here are some examples of how we can apply these principles:

In order to arrive at the correct answer, let's analyze the information given. We know that we can't tell which gatekeeper is which, so we need to think of a question that gives the same answer when a gatekeeper lies, and when a gatekeeper tells the truth.

One way to do this is to "link together" the truth-teller and the liar. Then, the question goes through both a truth teller and a liar, and you'll get the same answer no matter who you ask. To do this, we would need to ask one of the gatekeepers about the other.

Since we have just found a question that gives the same answer no matter who we ask, we have just solved the problem, and should go through the opposite door of whatever the gatekeeper gives us. □​

This problem is regarding a man who can never tell a lie. He says, "I have guessed a number from 1, 2, and 3. Can you, by asking me a single yes-no type question, find out the number I have chosen?" What would you ask?

Here observe that the possible options are three in number, i.e. 1, 2, and 3, while a yes-no question has two possible answers, i.e. "Yes," and "No." Since you need three pieces of information, the trick is to eliminate an option.

To do this, let's consider a case where the man cannot answer.

You can ask the following question: "From the number that you are thinking of, if you subtract 2 and take the square root of the result, will the answer be greater than 0?" See that if the man is thinking of 3, then 3−2​=1>0 and his answer will thus be "Yes." In case the man is thinking of 2, 2−2​=0 and his answer will be "No." However, if he is thinking of 1, then 1−2​=i. Now the man can't say "No" in this case, since law of trichotomy says that if a and b are reals and a is not greater than b then a has to be less than or equal to b, and here, i being an imaginary number, has no defined order with respect to 0. Hence in this case the man will remain silent. □​

You have been sent to a village to study the people residing there. Interestingly, there in the village reside two types of people: compulsive truth-tellers and compulsive liars. You are lost on a road which diverges into two: one leads to the village and the other to a jungle. You want to ask for directions as you want to go to the village. Luckily, you meet a man. But you don't know which class he belongs to: truth-teller or liar. If you're only allowed to ask one question that demands a yes-no answer, what should you ask?

You should ask a question that always gives you a positive answer. So you should ask a negation-of-negation type question like this: "If I show you this road and ask you whether it leads to the village, would you say yes?" The truth teller's case is trivial. In case the man is a liar and you have pointed the correct road and asked him whether it leads to the village or not, he would have said no. But since he has been asked whether he would have said yes and the true answer to this question is "No," he will tell you "Yes." Similarly in case of the wrong road, the liar will answer "No." □​

Next Question : The Next Gatekeeper

Before you solve this question, solve The Two Gatekeepers

Before you, Merlin and your friend, Albert reach the real exit, now you see two doors guarded by one gatekeeper. You know that you can't fight him and win (he is HUGE). You know that one door leads to the exit, and the other leads to death (again?), but you don't know which is which. You don't know whether he lies or he tells the truth. You can only ask ONE question

Now Albert starts crying. "There was two. Now there is ONE only!" he said, and then continued crying.

You try to think of a question (while ignoring the cries). Does a question exist so that you can leave peacefully?

Cite as: Truth-Tellers and Liars. Brilliant.org. Retrieved from https://brilliant.org/wiki/truth-tellers-and-liars/

Learn more in our Logic course, built by experts for you.