The chemical reactions involved in dropping mentos candies into a bottle of diet coke make quite the spectacle! Soda geysters, which can reach as high as ten meters, were a popular subject for viral videos in the early 2000's, but the science behind the spectacle remained a mystery until 2008.

Many people speculated that the geyser was the result of an acid base reaction, given the low pH of soda. However, none of the ingredients in mentos are basic, and the experiment works to some degree with any type of soda and any type of candy.

Mentos candies are not as smooth as they appear to the naked eye. They are covered in bumpy craters, which increases the total surface area. A Mentos dropped into a bottle of soda acts as a surfactant, meaning it reduces the surface tension of the soda. Water molecules are polar and attracted to each other. Anything that breaks them apart allows for bubbles of carbon dioxide gas to form in the solution. A rougher candy surface translates to more places for bubbles to grow, or more nucleation sites. Surfactants are compounds that lower the surface tension (or interfacial tension) between two liquids or between a liquid and a solid. Surfactants may act as detergents, wetting agents, emulsifiers, foaming agents, and dispersants.

This is essentially speeding up the process that makes sodas fizzy. Bottled sodas are kept under pressure so that more carbon dioxide can be forced into solution. When the pressure is released, the carbon dioxide is forced out of solution and makes little gas bubbles. So, if you open a bottle of soda gently, you get a pleasant beverage. If you shake the can first, you disrupt the solution and get a face full of soda. And if you add a big enough surfactant, you get a geyser. It's the same chemistry, but a different magnitude.

The two biggest factors affecting the geyser are the roughness of the candy used and the rate at which it sinks to the bottom of the soda bottle. [1] Other factors that affect the growth rate or total number of carbon dioxide bubbles also changed the geyser's height, such as temperature and the original surface tension of the soda. Diet Coke makes a better spectacle than regular Coca-Cola because both aspartame and benzonatate (a preservative used in artificially sweetened drinks) lower surface tension more than sugar does.

Mixing mentos and soda makes a great science demonstration for students studying gases, thermodynamics, fluid dynamics, surface science, and the physics of explosions among other chemistry and physics concepts. [1]

Tonya Coffey, a professor at Appalachian State University, used the experiment to give her undergraduate physics class a real-world research experience as one of their laboratory assignments. The project was eventually published in the American Journal of Physics. Though the manuscript is behind a paywall, a presentation that Dr. Coffey made about the experience is available on the schools website. [2]

The force exerted by the soda stream can be harnessed to do work. One enterprising group made a mentos and diet coke-powered rocket. However, the practical applications of this reaction are limited by the sticky mess it makes.

The engineer explains that the yellow nose cap is full of mentos, while the body is full of pressurized diet coke.

Watch the full video for a more detailed explanation. [3]

There is an urban legend that eating mentos while drinking soda could cause a person's stomach to burst. However, most of the carbonation is released from the soda as it is being drunk, so the pressure is lower and carbon dioxide is less likely to nucleate. Additionally, the stomach has a couple ways of expelling excess gases. 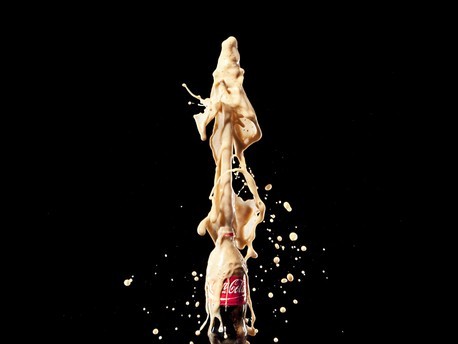