Standing waves on a string with fixed endpoint boundary conditions. [1].

The wave equation is a partial differential equation which is second order in both time and space which models small oscillations in some quantity y:

where v is the velocity of the wave. Depending on the medium in which the wave travels, the velocity v can take several different forms:

Strings: v=μT​​ where T is the tension of the string and μ is the mass density per unit length of the string.

Sound/Pressure waves: v=ρK​​ where ρ is the density of the gas through which the sound travels and K is the elastic bulk modulus given by K=γp, where p is the pressure of the gas and γ is the adiabatic index of the gas (equal to 5/3 for a monatomic ideal gas).

Light: Light waves are the propagation of oscillations in the electromagnetic field, which travel at the speed of light v=c.

Sound waves propagate in a room filled with a monatomic ideal gas. Suppose more gas is flooded into the room, so that the new density of gas in the room is twice what it was previously. The room is climate-controlled so that the temperature stays fixed. By what factor does the speed of the sound waves change?

Any solution of the wave equation can be expressed as the sum of left-traveling and right-traveling waves, which can be any functions of the form f(x−vt) and g(x+vt).

Show that any solution to the wave equation can be expressed as a sum of left-traveling and right-traveling waves f(x−vt) and g(x+vt).

If the wave is traveling in some one-dimensional region where both endpoints are fixed, the simplest examples of solutions are sinusoids:

where y0​ is the amplitude of the wave. Using trigonometric identities, this solution may be expanded:

This solution has constant amplitude and the spatial part sin(x) has no time dependence. This is the mathematical description of a standing wave, visualized below.

A superposition of left-propagating and right-propagating traveling waves creates a standing wave when the endpoints are fixed [2].

Solutions to the wave equation can also be written in the form f(kx−ωt) rather than f(x−vt), where k is the wave number and ω is the frequency, using the fact that ω=vk for non-dispersive waves. In this form, the solution for the amplitude of harmonic (sinusoidal) standing waves on a string fixed at both ends described above is: y(x,t)=2y0​sin(kx)cos(ωt)

Since the amplitude y(x,t) must vanish at the endpoints for standing waves at all times t, the allowed values of k are highly constrained. Suppose the string is length L, and label the endpoints of the string as the coordinates x=0 and x=L. Plugging in above, since sin(0)=0, y(0,t)=0 regardless of time t. However, at the endpoint at x=L, y(L,t)=0 if and only if:

for n any integer. The wave number k is thus constrained to the set of values:

Using the fact that the wave number is related to the wavelength λ by:

as are the frequencies:

To find the allowed wave numbers or frequencies, it is typically useful to first draw some cases of allowed wave patterns, from which the wavelength can be extracted first, as illustrated in the diagram below: 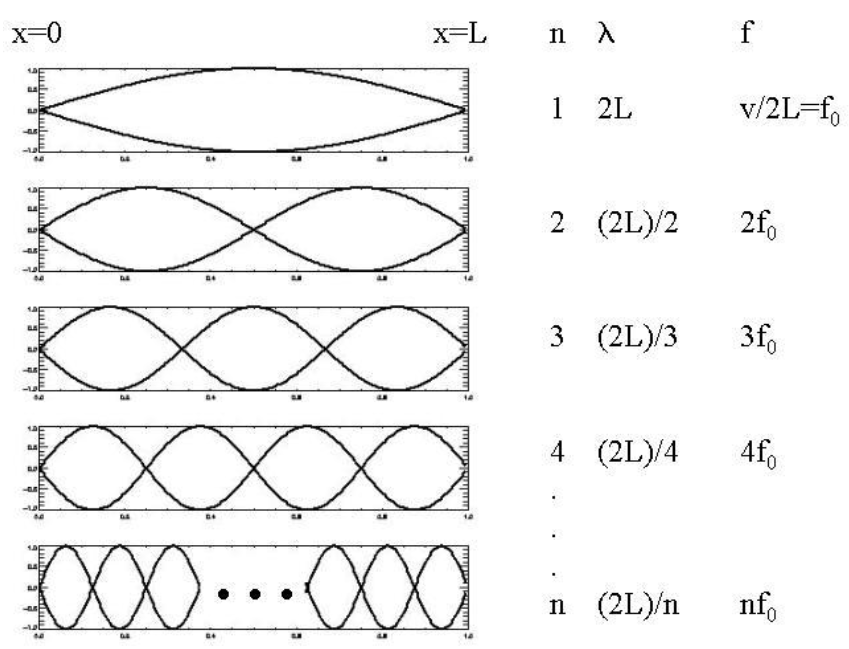 Standing wave patterns with increasing n and the corresponding wavelengths and frequencies [3].

An oscillating string of tension 100 N and mass density per unit length μ=1 kg/m fixed at both ends has fundamental frequency 400 Hz. What is the difference in meters between the wavelengths corresponding to the second and third harmonics?

This analysis applies not only to transverse waves on a string but in fact generic sinusoidal solutions to the wave equation. Another common example concerns longitudinal pressure/sound waves traveling in pipes. A pipe closed at both ends represents Dirichlet boundary conditions for the sound waves in the pipe, since the longitudinal displacement at the ends of the pipe must be zero. If one end of the pipe is opened, the boundary condition becomes Neumann: the pressure at the end should be atmospheric pressure, so there is no change in pressure as waves leave the pipe, and the slope of the longitudinal displacement is flat.

What are the allowed frequencies of longitudinal pressure waves in a half-open pipe of length L?

First, analyze the three longest allowed wavelengths to identify a pattern. The longitudinal displacement over the length of the pipe is illustrated in the following diagram:

Amplitudes of longitudinal displacement of pressure waves in a pipe for the three lowest-frequency harmonics.

The corresponding frequencies are found from the relation λf=v, which yields:

Compared to a half-open pipe, how much longer would a pipe open on both ends need to be in order to have the same fundamental frequency for longitudinal pressure waves?

[1] Image from https://upload.wikimedia.org/wikipedia/commons/5/5c/Standing_waves_on_a_string.gif under Creative Commons licensing for reuse and modification.

[2] Image from https://upload.wikimedia.org/wikipedia/commons/7/7d/Standing_wave_2.gif under Creative Commons licensing for reuse and modification.