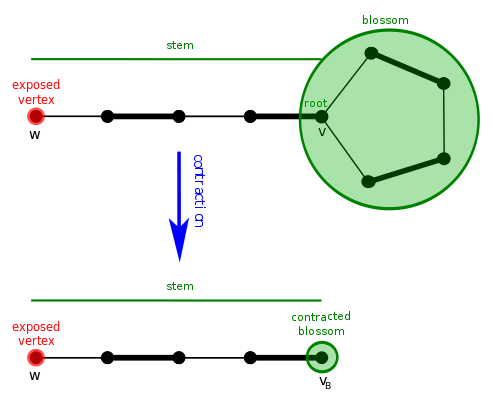 The Hungarian algorithm is a very efficient graph matching algorithm, but it only works on weighted bipartite graphs as it cannot deal with odd length cycles. The issue lies in finding augmenting paths, since if there is an odd cycle, the algorithm will calculate the wrong augmenting path because it will miss some of the edges. Additionally, a cycle may make the algorithm loop forever, reducing, in the case of minimum-weight optimization, the weight infinitely many times, inhibiting proper termination. The Blossom algorithm aims to fill this gap by solving more generalized graph matching problems, and can be used when the graph is not guaranteed to be bipartite.

The idea behind blossoms is that an odd-length cycle in the graph can be contracted to a single vertex so that the search can continue iteratively in the now contracted graph [3]. Here, these odd-length cycles are the blossoms. The algorithm can just go on through the graph and treat the tricky cycle as if it were only a single node — fooling the algorithm into thinking there is an even number of nodes in the graph (it has explored so far) so that it can run the Hungarian algorithm on it.

A blossom is a cycle in G consisting of 2k+1 edges of which exactly k belong to M, and where one of the vertices v in the cycle (the base) is such that there exists an alternating path of an even length, called a stem, from v to an exposed vertex w[3]. The advantage is given due to the ease at which the stem part can be toggled between edges in the blossom. 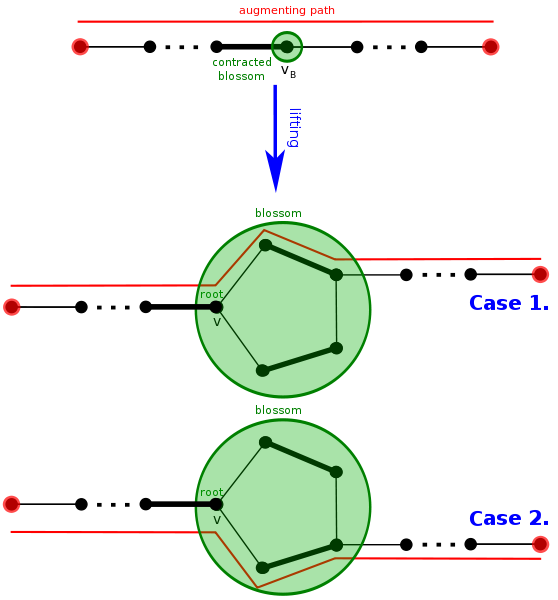 Notice the toggling in edges to make another matched edge the stem of the blossom[5]. 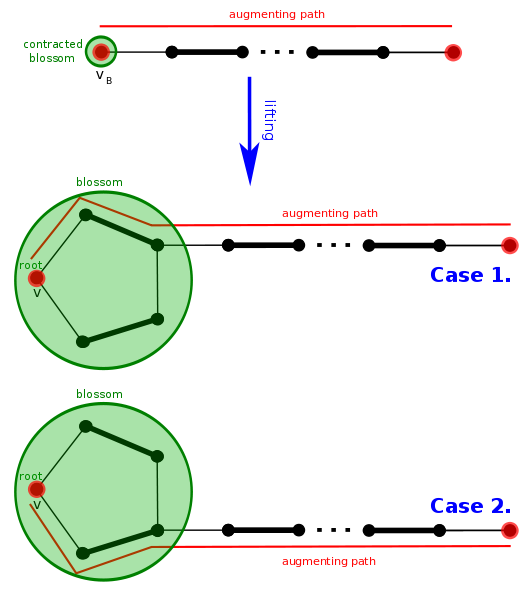 Formally, the algorithm is performed by maintaining a forest of scanned edges.

In the pseudocode above, a blossom can be easily spotted if two vertices connected by an edge are EVEN vertices, implying that the cycle is odd. Similarly, an augmenting path ρ can be retrieved by unshrinking the blossom and matchings shrunk along the way. If an augmenting path in H, ν, is obtained from G by shrinking B to b, if ν does not visit b, then ν is also an M augmenting path. Otherwise, either ν ends in b, in which case the blossom B included the root of the tree so ν ends at some vertex B; or ν visits b, in which case ν reaches vertex x on B, and the blossom can be altered so that the matched edge can connect the graph with the root, as seen in Image 6 above [7].

This algorithm was later improved to have a runtime of O(∣V3∣), and subsequently further reduced to O(∣E∣∣V∣​). For further details on the fast implementation refer to Micali and V. Vazirani’s paper, A Proof of the MV Matching Algorithm.