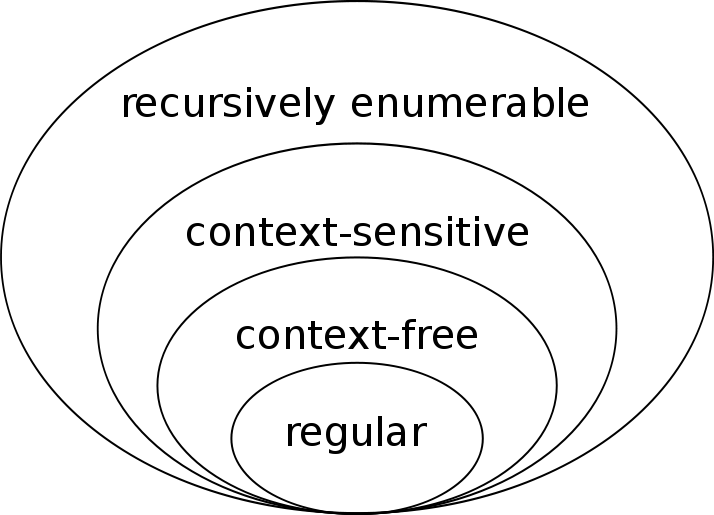 In formal language theory, a language is defined as a set of strings of symbols that may be constrained by specific rules. Similarly, the written English language is made up of groups of letters (words) separated by spaces. A valid (accepted) sentence in the language must follow particular rules, the grammar.

The set of all context-free languages is identical to the set of languages that are accepted by pushdown automata (PDA).

Here is an example of a language that is not regular (proof here) but is context-free:

{anbn∣n≥0}. This is the language of all strings that have an equal number of a’s and b’s.

In this notation, a4b4 can be expanded out to aaaabbbb, where there are four a’s and then four b’s. (So this isn’t exponentiation, though the notation is similar).

Here is a proof that context-free grammars are closed under union. [2]

Here is a proof that context-free grammars are closed under concatenation. This proof is similar to the union closure proof.

Every word that G generates is a word in L followed by a word in P, which is the definition of concatenation.

Context-free languages are not closed under complement or intersection.

If CFL's were closed under intersection then there would be CFLs that violate the pumping lemma for context-free languages (see the next section for more details) which cannot be.

To show that CFL's are not closed under complement, we will use contradiction, the result from intersection, and De Morgan's Law.

We know that CFLs are closed under union and De Morgan's law states:

Which can be rewritten:

Since using the assumption that L and L are CFLs resulted in a false statement, we know that CFLs are not closed under complement.

Proving that something is not a context-free language requires either finding a context-free grammar to describe the language or using another proof technique (though the pumping lemma is the most commonly used one). A common lemma to use to prove that a language is not context-free is the Pumping Lemma for Context-Free Languages.

The pumping lemma for context-free languages states that if a language L is context-free, there exists some integer pumping length p≥1 such that every string s∈L has a length of p or more symbols, ∣s∣≥p, that can be written s=uvwxy where u,v,w,x, and y are substrings of s such that:

Essentially, the pumping lemma holds that arbitrarily long strings s∈L can be pumped without ever producing a new string that is not in the language L.

Use the Pumping Lemma to prove that L={anbncn∣n>0} is not a context-free language.[3]

Assume, for the sake of contradiction, that L={anbncn∣n>0} is a context-free language. By the pumping lemma, there exists an integer pumping length p for L. We need a string s that is longer than or equal to the length of p. Certainly s=apbpcp is longer than p, so we choose this for the s string. This s is in L since it has p a’s, p b’s, and p c’s.

Now by the pumping lemma, ∣vwx∣≤p. There are five possible places in the string that we can assign to be vwx:

In any of these five cases, we can easily verify that the third constraint for the pumping lemma, that uvnwxny∈L∀n≥0, does not hold. In other words, for any of these five choices of vwx, the string s cannot be pumped in a way that results in a string that has an equal number of a’s, b’s, and c’s (the definition of the language L).

In the first case, there will be more a’s than there are b’s and c’s, making the resulting, pumped string, not a member of L. If we pump this region, we will get the string aaaaaaaabbbbbccccc: a string with 8 a’s, 5 b’s, and 5 c’s. Clearly this is not in the language. A similar proof can be checked for the third and fifth case, just pump the b and c region, respectively, and the results will be symmetrical.

For the second and fourth case, we do something similar. If we pump anywhere in the a and b region only, we will have a resulting string with more a’s and b’s than c’s (for the second case) and more b’s and c’s than a’s (in the fifth case). For the second case, if we take a5b5c5=aaaaabbbbbccccc and p=3 and pump the last a in the a section and the first two b’s in the b section, we get this string: aaaaaabbbbbbbccccc — a string with six a’s, seven b’s, and five c’s. The fifth case has a symmetrical example.

In the example above, why was vwx=aibjck for some i, j, and k where j+k+i≤p not included as one of the options for vwx?

The first constraint of the pumping lemma is that ∣vwx∣≤p. Because the string was s=apbpcp, there are p a’s, followed by p b’s, followed by p c’s. If vwx spanned the a region, b region, and c region, it would necessarily be longer than p. For example, if vwx included only the last a in the a region, the entire b region, and then the first element of the c region, it would have length p+2 and therefore wouldn’t work.

There are grammars called context-sensitive grammars which are more powerful (meaning they can generate more complex languages that might require more memory) than both regular languages and context-free languages.