A coordinate bond is a type of covalent bond where both of the electrons that form the bond originate from the same atom (more generally, a "dative" covalent bond).

It is important to note that coordinate bonding between oppositely charged ionic species is of a covalent character, where the bonding electrons are shared, as opposed to ionic compounds.

In the reaction below, ammonia and hydrochloric acid react to form an ammonium ion and a chloride ion. Chloride is more electronegative than hydrogen, so it is able to strip the hydrogen atom of its single electron. The hydrogen ion shifts to the ammonia molecule. As a result, the hydrogen ion carries no electrons. As the Lewis structure shows, nitrogen has two unpaired electrons (also called a lone pair, or nonbonding electrons) that attract the positively charged hydrogen ion.

At this point, nitrogen has an octet. However, the lone pair creates a polarity with a partial negative charge on nitrogen. The molecular geometry of ammonia is affected as well. Rather than having the hydrogens arranged in a single plane at 120-degree angles, the hydrogens are squeezed closer to each other to form the base of a pyramid, with the negatively-charged nitrogen atom forming the apex.

Meanwhile, hydrogen has no electrons at all, leaving it with a net positive charge that is attracted to the partial negative charge of nitrogen.

The orbital for that lone pair of electrons now includes the hydrogen atom, holding the two species together in a single, positively charged ammonium ion. The nucleus of the hydrogen atom is participating in the bond, but hydrogen did not donate any electrons to the process. All octets and duets are satisfied, and the ammonium has four evenly-spaced hydrogen atoms forming a tetrahedral structure around the nitrogen atom.

Is the coordinate bond a different length or strength than the other covalent bonds in ammonium?

No. Though the coordinate bond is often drawn differently on paper, in a molecule, it is indistinguishable from the other N-H bonds in terms of both bond length and strength.

In a reaction between chloromethane CHX3​Cl and hydroxide OHX−, where would you expect a new coordinate bond to form?

In this second example, ammonia reacts with boron trifluoride. Before the reaction, nitrogen has eight valence electrons, including a lone pair of electrons. Boron has only six valence electrons, so it is two electrons short of an octet. The two unpaired electrons form a bond between nitrogen and boron, resulting in complete octets for both atoms. A coordinate bond is sometimes represented by an arrow, as shown in the figure below. The direction of the arrow indicates that the electrons are moving from nitrogen to boron.

There is another little concept called solubility with vast applications hidden in the above example. Notice that ammonia is a polar molecule due to the presence of a lone pair of electrons, and boron trifluoride a non polar compound. Conventionally like dissolves like, concluding that NH3​ and BF3​ are insoluble in each other.

But, as seen in the figure above, there is an acid-base reaction which happens. NH3​ is a Lewis base and BF3​ is a Lewis acid. So NH3​ forms a coordinate bond with BF3​. Therefore, they are considered as soluble in each other because of the reaction between them.

Understanding how coordinate bonds form can be instrumental in designing complex organic molecules. 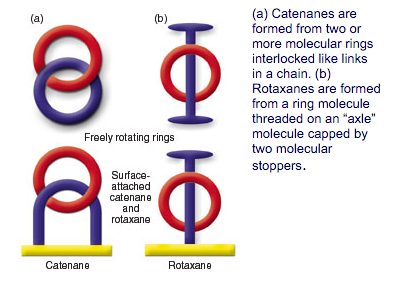 Rotaxanes, shown in the righthand column, are one of many mechanically interlocked molecular shapes. [1] Rotaxanes are an example of a mechanically interlocked molecule, a complex organic molecule that is physically joined. These molecules are interesting to synthetic chemists as "potential building blocks for future molecular-scale devices—motors, sensors, and machines on the nanometer scale" [1].

The image below shows an organic molecule that can self-assemble to form a rotaxane because the molecule was synthesized with coordinate bonds in targeted places. Those bonds are then broken and re-formed to give the molecule its desired shape [2].

Precursor molecules to a rotaxane shape [2]