A set of the four quantum numbers describes the unique properties of one specific electron in an atom. Since each set is unique, they serve as a way of uniquely naming individual electrons (i.e. a kind of coordinate system). The first three, n, ℓ, and mℓ​, come from the solution to the spherical Schrödinger equation and describe the orbital of the electron, which is the shape of its wave function. The fourth number, ms​, accounts for the fermion status of the electron by describing its spin. 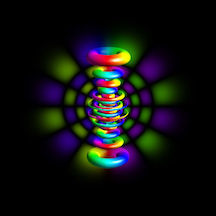 It was given by Niels Bohr. The principle quantum number, n, represents the energy level of an electron. As n increases, more electrons are permitted in the shell, the electron is farther from the nucleus, and the electron is bound more loosely to the atom. In order to represent the quantization of the energy levels, the principle quantum number may only take on positive integer values.

The energy of an electron in the nth shell of any hydrogen-like atom is En​=n2−13.6 eV​.

It was given by Sommerfeld who suggested the presence of elliptical orbits. 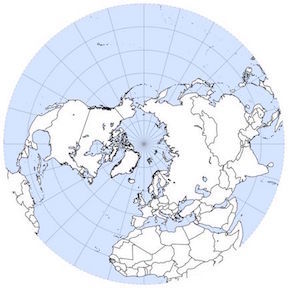 Each of these concentric rings of latitude represents a different azimuthal position measured from the geographic North pole.[2]

What are the permitted values of ℓ for the n=4 orbital?

As ℓ can take any positive integer value less than n, the possible values are 0,1,2, and 3.

Which of these pairs of quantum numbers is not permitted?

It turns out the magnitude of the angular momentum of an electron orbiting an atom is described by the angular quantum number ℓ according to L=ℓ(ℓ+1)​ℏ.

What are the possible angular momenta of an electron in the n=3 orbital?

Next, calculate the angular momentum associated with each value of ℓ.

The angular momentum of an electron located in the ℓ=4 subshell of an atom can be expressed a​ℏ. What is the value of a?

It was given by Lande. The magnetic quantum number, mℓ​, describes the number of preferred orientations of the electrons present in a subshell. It is restricted by ℓ.

What are the possible orbitals of the n=3 shell?

Next, the values of mℓ​ must satisfy the relation ∣mℓ​∣≤ℓ.

Which of the following sets of quantum numbers is not allowed?

It was given by Ulhenbeck and Goud Smit. The spin quantum number, ms​, represents the spin of an electron. Since electrons are fermions, they may only have half-integer spin, sometimes called "spin up" and "spin down." Also, as a consequence of their fermion status, electrons obey the Pauli's exclusion principle, which is why each set of quantum numbers within an atom is unique to the electron it describes.

The permitted spin quantum numbers of an electron are ms​=±21​.