Cosmology is the study of the physics of the universe and the large-scale structures that have evolved within it (e.g. formation of galaxy clusters). Unlike astronomy, cosmology is not concerned with the behavior of individual stars, planets, and solar systems. Rather, cosmologists focus on broader research questions such as the following: 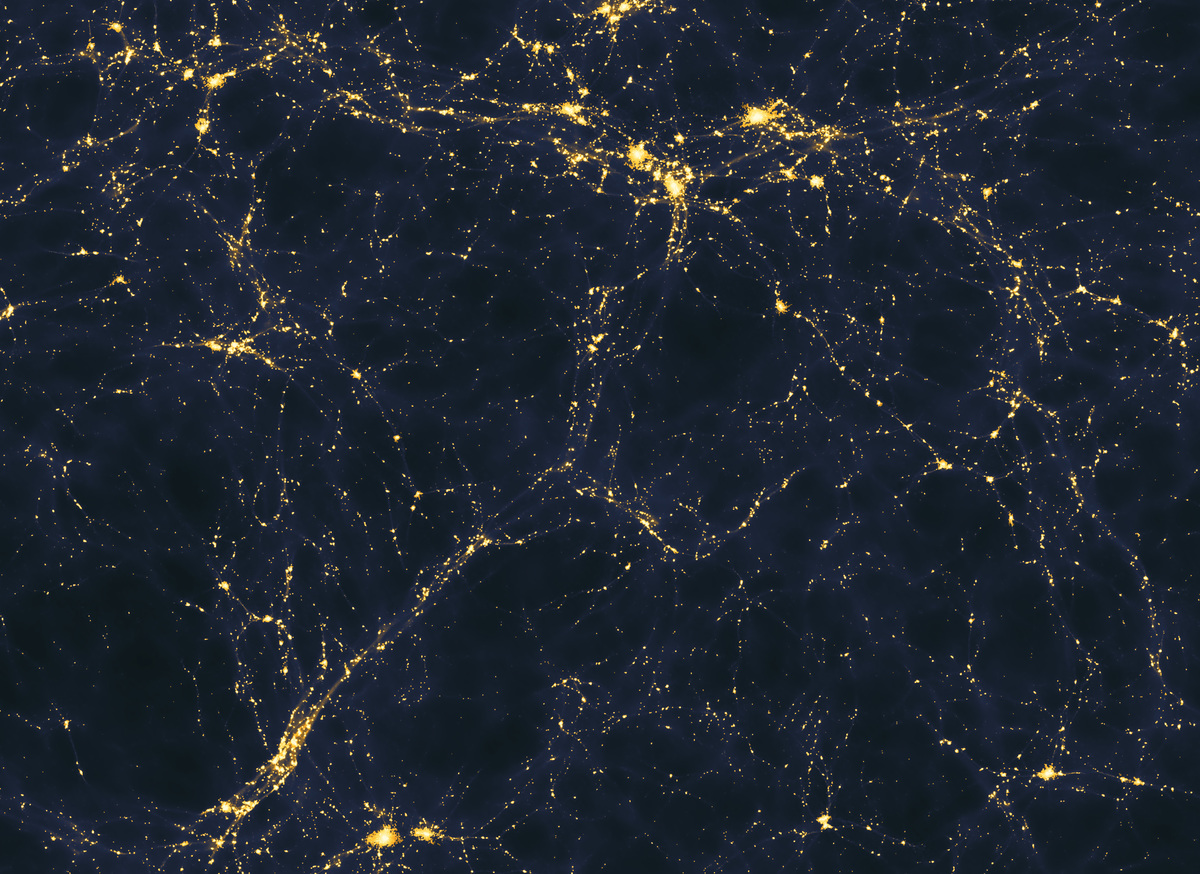 Theoretical physicists also turn to cosmology in looking for answers to questions in other subfields of physics. For instance, physicists studying the Standard Model of particle physics have used cosmology to try to resolve the question of baryon-antibaryon asymmetry in the universe (why more matter exists than antimatter). A subject of active research is whether the dynamics of the early universe might be able to serve as a test of theories of high-energy physics such as string theory.

Modern cosmology as a distinct field from astronomy arose in the early twentieth century, concurrent with the theoretical and experimental developments of general relativity and advances in astronomy. Around this time, astronomers noticed that the redshift of light (akin to the Doppler effect) of nearby galaxies and nebulae implied that these astronomical bodies were receding from Earth. On the basis of these observations, extrapolating backwards, astronomers theorized that all astronomical bodies once originated at a single point--the so-called Big Bang. Contrary to popular belief, physics says very little about the moment of the Big Bang or what came before--it is merely the consequence of extrapolating astronomical observations and later theoretical equations backward to time zero, with no description of what happens at time zero.

In 1929, Hubble was able to measure the distance to some of these receding astronomical bodies. From the relationship between the redshift of the light from these galaxies and the distance, he was able to conclude that the galaxies were receding from Earth with a velocity approximately proportional to their distance. The best explanation for this fact, on the basis of the cosmological principle, was that the universe is expanding and carrying the galaxies with it. The cosmological principle is the well-accepted hypothesis that on the largest scales (on which galaxy clusters look like grains of sand, comparatively), the universe is homogeneous and isotropic. This means that from any vantage point, the universe looks approximately the same, and it also looks approximately the same in all directions. This is true only on the scale of approximately greater than 100 Mpc≈3×1024 m, where a single parsec (pc) is the distance at which the earth-sun distance subtends only a single arcsecond!

Using Einstein's general relativity, the FLRW metric and Friedmann equations (discussed below) were derived, which predicted the dynamics of the expansion of the universe based on the matter content of the universe. Both the mathematics as well as observation (i.e., the existence of small-scale structure like habitable planets) put heavy constraints on the abundances of different types of matter in the universe. For instance, the dynamics of the early universe have to be such as to allow baryogenesis, the creation of the baryons (three-quark particles like protons and neutrons) that form every known element from the hot primordial soup of fundamental particles. After baryogenesis, nucleosynthesis must occur to generate the light elements like hydrogen, helium, and lithium to drive fusion in stars and generate the heavier elements that are common to our everyday experience.

In the modern era, recent experiments to measure these abundances include the Wilkinson Microwave Anisotropy Probe (WMAP), the Planck space mission, and the Atacama Cosmology Telescope (ACT). These experiments typically measure properties of the cosmic microwave background radiation (CMB); a cold bath of microwave radiation that permeates the universe (discussed below). From these experiments, it is known that the energy contained in the universe is composed of approximately 69% vacuum energy, 26% dark matter, and 5% baryonic matter, of which a tiny fraction is contained in radiation. Due to the fact that the vacuum energy currently drives the dynamics of the expanding universe, the universe is now in a stage of accelerated expansion.

Presently, research in cosmology is focused on a small number of big questions. One of them is examining the origin and nature of dark energy (vacuum energy) and dark matter. Another is the study of cosmic inflation, a popular theory of the early universe in which the universe expanded exponentially for a brief period shortly after the Big Bang. Inflation is an attractive theory because it solves several major problems of the particle physics of the early universe at once; though experiment seems to support the claim that some form of inflation occurred, cosmic inflation is not yet incontrovertible in the physics community. Inflation is still a popular topic of current study because it occurred in the early universe where the effects of quantum gravity may be important and also may have effects on the observable low-temperature physics of the CMB.

Which of the following statements accurately summarizes the cosmological principle?

The universe is permeated with a very cold (∼2.7 K) bath of microwave radiation called the cosmic microwave background or CMB for short. By the cosmological principle discussed above, the universe is isotropic, meaning that it looks the same in all directions on large enough distance scales. Experimentally, this is justified by the fact that the temperature distribution of the cosmic microwave background radiation is remarkably homogeneous, as displayed in the picture below: 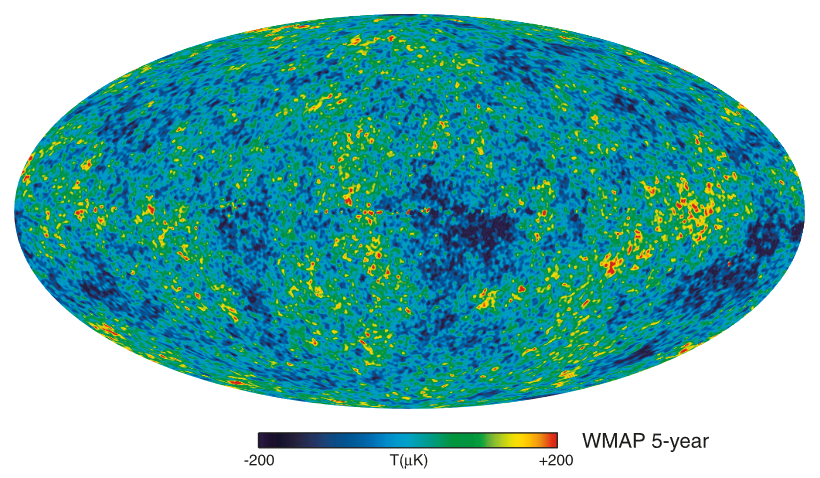 Mollweide projection from the sphere representing every angular direction from Earth's surface to an ellipse of the temperature distribution of the CMB, justifying the isotropy of the universe [4]. Data taken from the WMAP satellite's 5-year results, 2003. The plot specifically shows TδT​ with δT the variation from the mean temperature with red and yellow indicating hotter regions and vice versa.

However, as can be seen from the above, the temperature distribution is not perfectly uniform on small scales but contains numerous hot and cold specks or anisotropies. These anisotropies are the last remnants of quantum fluctuations in the early universe.

Since the temperature spectrum is a function over the sphere representing the night sky (although plotted in a map projection into an ellipse), it can be decomposed into a sum over spherical harmonics:

where the amℓ​ are some set of coefficients. Since the decomposition represents the fractional difference TδT​, a00​=0 since the average deviation from the mean is zero. Similarly, the am1​ represent the dipole moments generated by the Doppler shift of the CMB caused by the motion of the solar system through the radiation. These terms are usually subtracted in analyzing isotropies, so the interesting parts of the sum start at ℓ=2. 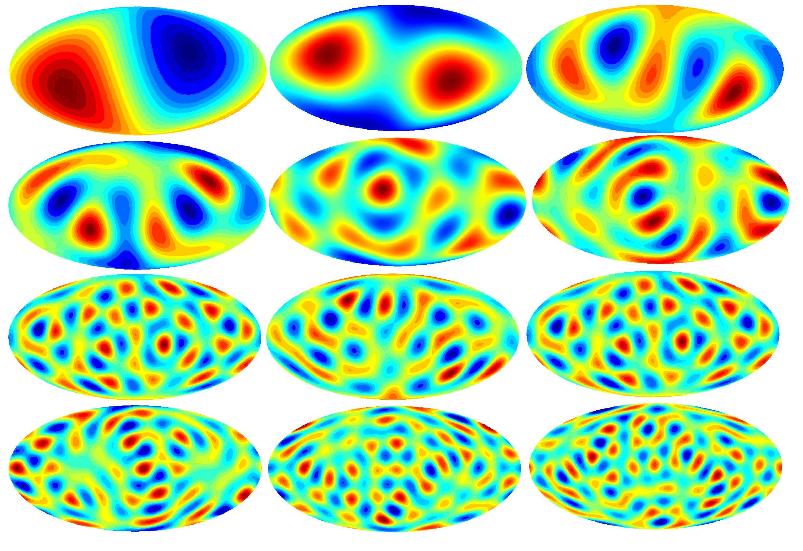 The spherical harmonics ℓ=1 to 12 plotted in the Mollweide projection used to represent the CMB [2]. 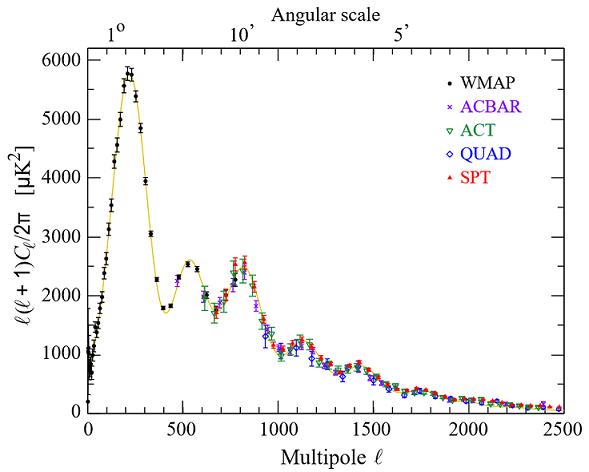 Plot of the (normalized) coefficients Cℓ​ as a function of multipole moment ℓ, with data taken from several different cosmological experiments [3]. The data match the underlaid theoretical model beautifully which predicts the numerous peaks and damped tail among other features.

The cosmic microwave background CMB is a bath of blackbody radiation permeating the universe at a temperature of 2.7 K. What is the wavelength of the radiation in the CMB in centimeters?

The cosmological principle means that a cosmological spacetime is spatially maximally symmetric: any metric of spacetime should be invariant under spatial rotations and translations. The most general metric satisfying this constraint is the Friedmann-Lemaitre-Robertson-Walker (FLRW) metric. In spherical coordinates with the origin fixed anywhere, it is given by the following invariant interval:

The behavior of the scale factor a(t) is of central importance to physical cosmology. As a(t) increases, the measured distance between cosmological bodies increases. The scale factor thus relates the scaling of distances at different times due to the expansion of the universe. Typically, the scale factor at the present time is normalized to one and the scale factor at previous times is measured with respect to the present day. The usual analogy for this expansion uses pennies glued to the surface of a balloon. As the balloon expands, the pennies stay fixed, but the distance between the pennies increases. Thus, even though the pennies are stationary, any particular penny sees the others retreating from it at all times. Similarly, from the perspective of Earth, astronomers see galaxies recede with the expansion of the universe.

An analogy for the expanding universe. Galaxies, though fixed in space, appear to see the others recede from them like pennies on the surface of an expanding balloon. The change in distance is by a factor of the scale factor a(t).

with uμ​ the velocity vector of the fluid. Solving Einstein's equations yields the following two independent equations for a(t):

These two equations taken together are known as the Friedmann equations, which describe the dynamics of a(t) and thus the expansion of the universe.

Derive the evolution of the scale factor with time given an approximately flat universe filled with dust (collisionless, nonrelativistic matter).

For collisionless, nonrelativistic matter, the energy density vastly exceeds the pressure, so one can take ρ≫p in Friedmann's equations. Furthermore, by the conservation of energy, the total amount of matter M in any fixed volume in the universe obeys the equation ρ(t)a3(t)=M= constant. Note that the assumption of approximate flatness corresponds to zero curvature, i.e. k=0; this approximation is a good one in our universe. This means that the energy density scales as ρ∝a3(t)1​.

Thus, one must only solve the first Friedmann equation given ρ∝a3(t)1​, i.e.

Rearranging this first-order ODE and eliminating the constants (since the relationship is one of proportionality), one has

Solving by separation and integration,

The evolution of the scale factor with time is therefore a(t)∝t2/3. □​

From the above example, one can mathematically see the idea of the Big Bang entering physical cosmology. In a matter-dominated, flat universe, as t→0 in some unit system, a(t)→0 and therefore the measured distances between all objects in the universe approach zero. This means exactly that the universe is being crunched down into a point, where the Big Bang occurs. Although the universe is not matter-dominated in most epochs, this conclusion holds from the mathematical results in other cases as well, although it is believed that very close to t=0 quantum-mechanical effects invalidate at least some of the above equations.