The Cuckoo Filter is a probabilistic data structure that supports fast set membership testing. It is very similar to a bloom filter in that they both are very fast and space efficient. Both the bloom filter and cuckoo filter also report false positives on set membership.

Cuckoo filters are a new data structure, described in a paper in 2014 by Fan, Andersen, Kaminsky, and Mitzenmacher[1]. Cuckoo filters improve upon the design of the bloom filter by offering deletion, limited counting, and a bounded false positive probability, while still maintaining a similar space complexity. They use cuckoo hashing to resolve collisions and are essentially a compact cuckoo hash table.

Cuckoo and bloom filters are both useful for set membership testing when the size of the original data is large. They both only use 7 bits per entry. They are also useful when an expensive operation can be avoided prior to execution by a set membership test. For example, before querying a database, a set membership test can be done to see if the desired object is even in the database.

The cuckoo filter is a minimized hash table that uses cuckoo hashing to resolve collisions. It minimizes its space complexity by only keeping a fingerprint of the value to be stored in the set. Much like the bloom filter uses single bits to store data and the counting bloom filter uses a small integer, the cuckoo filter uses a small f-bit fingerprint to represent the data. The value of f is decided on the ideal false positive probability the programmer wants.

The cuckoo filter has an array of buckets. The number of fingerprints that a bucket can hold is refered to as b. They also have a load which describes the percent of the filter they are currently using. So, a cuckoo filter with a load of 75% has 75% of its buckets filled. This load is important when analyzing the cuckoo filter and deciding if and when it needs to be resized.

The following gif shows how a cuckoo filter might insert some elements. The f value of the fingerprint is 7, and the b is 2. This gif shows how inserting an element three times would cause the cuckoo filter to use the secondary bucket. Notice also how the false positive probability (FPP) increases with each insert.

One final optimization used by cuckoo filters is that they use semi-sort. Semi-sort is a technique to save space that utilizes the fact that the order of fingerprints in a given bucket do not matter. They can compress the buckets by first sorting the fingerprints in them, then storing another fingerprint of that result. This technique saves 1 bit per fingerprint and is the reason behind the cuckoo filter's bits-per-entry equation below.

Cukoo hashing: each letter has two possible buckets. Here, B would have to move down.[2]

Cuckoo hashing got its name from the cuckoo bird. Cuckoos are known for laying their eggs in other birds' nests. When those baby cuckoo hatch, they attempt to push any other eggs or birds out of the nest. This is the basic principle of cuckoo hashing.

Now, there is a lone (key, value) pair that is unassigned. But, there are two hash functions. The same process begins for the new key. If there is an open spot between the two possible buckets, then it is taken. However, if both buckets are taken, one of the values is kicked out and the process repeats again.

It is possible to encounter an infinite loop in the process of removing and moving keys. Because of this, it is important to keep track of every bucket you visit. If the same bucket is visited twice, there is a cycle. The only way to fix it is to rebuild the hash table, making it bigger or changing the hash functions. 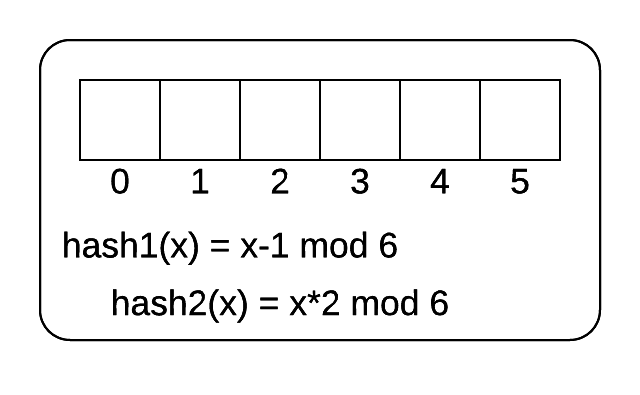 For reference, here is how the cuckoo filter works:

Fill your answer in as a list of numbers. Leave a list slot empty if the corresponding bucket in the cuckoo table stays empty.

Though cuckoo filters are based on cuckoo hashing, they actually use a derivative of that which the inventors call partial-key cuckoo hashing. In a regular cuckoo hash table, if something is hashed to its first possible bucket and that bucket is empty, it is hashed by another hash function and moved to a second bucket. However, in the cuckoo filter, only f-bit fingerprints are stored. So, if a fingerprint needs to be kicked out, it's alternate bucket needs to be able to be found. Partial-key cuckoo hashing works like this:

This is actually a huge point of contention concerning cuckoo filters. In theory, it has been proven that cuckoo filters won't work due to their unrandomized hash functions. The smaller the fingerprint, f, the fewer choices each key has for their pair of buckets, and the higher a chance of collisions. The lower bound on fingerprint size becomes Ω(n). Note that we using Ω here to denote the lower bound.

Oddly enough, though cuckoo filters have been shown to be terrible in theory, they tend to work in practice. In fact the lower bound of fingerprint size above excludes some constant factors. In fact, it is Ω(n)/2b, where b is the number of keys a bucket can hold in the cuckoo filter. Even when b equals 4, this covers a wide range of n, and fingerprints can be a reasonable size.

Deeper analysis of partial-key cuckoo hashing is an open question. Further evaluation might lend more theoretical credibility to the data structure in the future.

Lookup and deletion are O(1) operations in cuckoo hashing, and the same is true for cuckoo filters. There are a maximum of two locations (or however many hash functions you use) to check. If found, the appropriate operation can be performed in O(1) time as well, making these both constant time operations.

Proving the insertion complexity is tricky and longer, so it's included below.

Cuckoo filters improved upon the design of the bloom filter by allowing deletion from the set. Counting Bloom Filters had already been proposed as a way of modifying the bloom filter to allow deletions. However, counting bloom filters come with their own set of disadvantages.

There are four ways to compare cuckoo filters, bloom filters, and counting bloom filters: the time complexity of their operations, their false positive probabilities, their space complexity, and their capacity.

In cuckoo hashing, inserting an element seems like much worse than O(1) in the worst case because there could be many instances of needed to remove a value in order to make room for the current value. Plus, if there is a cycle then the entire table must be rehashed.

Note: this proof will be done assuming two hash functions are used in the cuckoo hash table, though it can be generalized to more. The theoretical analysis of cuckoo filters is still underdeveloped, so parts of this proof may gloss over some areas. 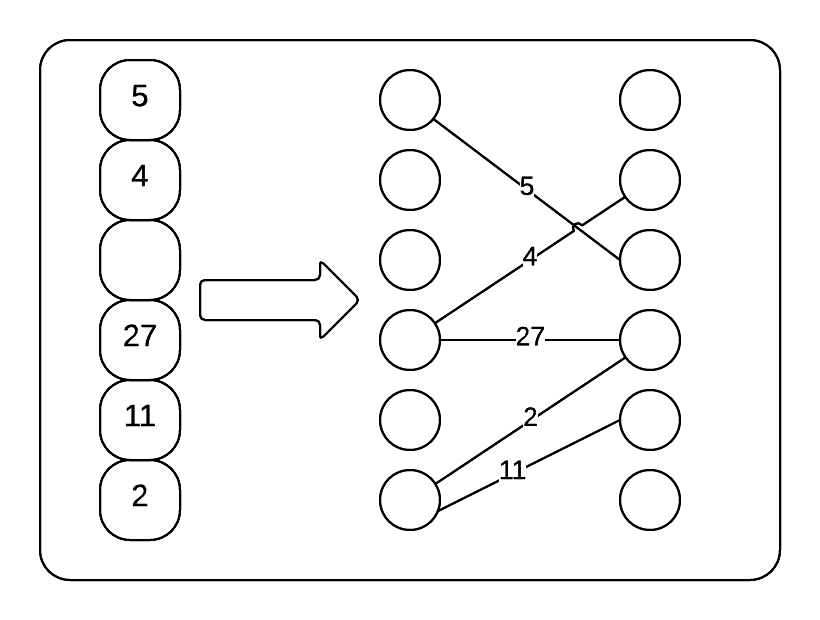 Making a cuckoo graph from a cuckoo table

Claim 1: The first idea from this new, bipartite graph is that an insert will fail if there are more than two cycles in the graph. If there are k nodes in the graph (buckets), then there need to be k+1 edges (keys) in order to make two cycles. k+1>k, so there are too many elements to fit in the buckets and the insertion will fail.

Claim 2: The second idea to take away from this graph is that an insertion will succeed if there a zero or 1 cycles in the graph. If there are zero cycles, then the chain of displaced elements will eventually come to rest. However, with 1 cycle, the chain can still come to rest. Once the chain of displaced elements has gone through the entire first cycle, what remains of the bipartite graph is a tree (a graph with no cycles). So, the nodes within the first either come to rest, or they kick out a certain element that eventually stabilizes elsewhere in the remaining graph.

Claim 3: The final idea that is important in this graph is that an element is inserted into a connected area of the graph with k nodes (buckets), then it will displace at most 2k nodes to be inserted. This idea follows from the logic of the bipartite graph, where there are twice as many nodes 2k as buckets that created them k.

Now that it is proven that an insertion fails if and only if there are two or more cycles in the cuckoo graph, the probability that there are two or more cycles is needed. When the number of edges m is much less than the number of nodes n in a bipartite graph, then the probability, given a path of length k, that it is a cycle is

If an insertion is successful, it is because it found path of length k that was not a cycle. This is found with probability less than or equal to (2m/n2)k⋅nk=(2m/n)k. This is expected constant time when m≪n and logarithmic time with high probability.

This can be proven with much stronger proofs, but they are complicated and unwieldy. Now, everything besides the resizing of the hash table has been proven to be O(1). When the table is resized O(n) work must be done. However, there have already been n O(1) inserts. This makes the amortized cost to resize the table O(1).

The relationship between m and n is optimized when m=(1+ϵ)n for some small ϵ. When this relationship holds, the probability that there is a connected component of the graph with two or more cycles is O(1). When this happens, the load factor of the cuckoo table is 2mn​=2+2ϵ1​=1/2. This means that rougly half of the table is full. When this capacity is exceeded, the need to resize occurs more frequently. A similar proof can be used to show than when 3 hash functions are used, 91% of the table is usable.