According to this, the shells of an atom are named as K,L,M,N,..., etc., or 1,2,3,4,..., etc., and the maximum number of electrons that can be accommodated is given by the formula 2n2, where n=(number of the shell). For example, the 3rd shell can accommodate 2×32=18 electrons. To be familiar with the valency, you are requested to read Octet Rule.

We have to construct the wave function for a system of identical particles so that it reflects the requirement that the particles are indistinguishable from each other. Mathematically, this means interchanging the particles occupying any pair of states should not change the probability density of the system. This simple statement has the enormous consequence of dividing all particles in nature into one of two classes.

This rule states that two particles with half integer spins cannot occupy the same quantum state at the same time. In other words, two electrons moving in an orbital cannot have the same spin quantum number or simply spin.

Half integer spin: A spin is an intrinsic property of all elementary particles. Fermions, the particles that constitute ordinary matter, have half-integer spin.

For example, in a helium atom, we have two electrons, and they are not present in the same spin, i.e. a helium atom:

The quantum numbers govern how the particles behave under certain environmental conditions, and they also describe how an electron behaves in a certain orbital. From the Pauli's exclusion principle, we know that two particles cannot be present in the same quantum state, and thus there are a set of 4 quantum numbers which distinguish the quantum behavior of an electron. They are listed as follows:

2. angular quantum number:
The angular momentum quantum number is a quantum number that describes the shape of an orbital and tells us which subshells are present in the principal shell. It is denoted by the letter l, where the value it takes is from 0 to (n−1); that is, if the principle quantum number of an electron is n, then the possible values would be l=0,1,2,3,⋯,(n−1).

Find the possible values of the angular quantum number if the electron is present in the M energy level.

But what do these values represent? As said earlier, it represents the subshell (will be discussed soon) in which the electron is present.

If an electron is present in the N shell, find the total number of possible angular quantum numbers in this state.

Find all possible values of the magnetic quantum number for an electron present in the M shell.

As seen earlier, the principle quantum number of an electron present in the M shell is 3. The values of l when n=3 were l=0,1,2. So, the values of ml​ when n=3 will be as follows:

If an electron is present in the f orbital of the N shell, what are the total possible magnetic quantum numbers?

According to quantum mechanics, each shell of an atom is defined as an energy level. The shells are as follows: 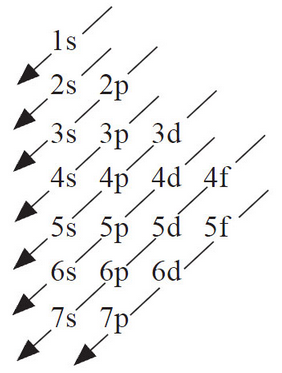 It also helps in writing the electronic configuration of any specific element. For example, X10​X2102​Ne - 1s22s22p6.

This rule says that the electrons occupy the lowest possible energy level before proceeding to the higher level. The order of increasing energy level is given by the n+l, where

The rule is based on the total number of nodes in the atomic orbital, n+ℓ, which is related to the energy. In the case of equal n+ℓ values, the orbital with a lower n value is filled first. The fact that most of the ground state configurations of neutral atoms fill orbitals following this n+ℓ, n pattern was obtained experimentally, by reference to the spectroscopic characteristics of the elements.

Pictorial representation of the Aufbau Principle

This lays the corner stone for the internal arrangement of electrons in an atom, it deals with the order of filling the electrons into the orbitals of the same subshell. When more than one orbital of equal energy are available (e.g. px​,py​,pz​), the electrons first occupy the orbitals with parallel spins or same spin. Only then the pairing of electrons will take place.

Let's have a look at the examples of nitrogen and oxygen:

Note that the electrons are placed in orbitals with parallel spins and are not paired up before at least one electron occupies each orbital.

But we can't place the electrons with opposite spin (as in the case below) or start pairing up electrons before filling up each orbital with at least one electron (as in the next case):

Observe that the total spin of the unpaired electrons is maximum in the correct configuration, which is why this rule is also called Hund's rule of maximum multiplicity, the multiple being the spin of the electron i.e. 21​.

as opposed to this one where the pairing up has taken place in the wrong order, disobeying Hund's rule:

Again observe that the total spin of the unpaired electrons is maximum in the correct configuration.