In economics, externalities are a cost or a benefit that occurs to a bystander. For instance, a factory may pollute the air in it's town. The company running the factory may not have to pay for the costs of this pollution, nor may the customers that buy the factory's products. However, the people who live in that town are bystanders that pay the cost of the pollution externality produced by this theoretical factory. Externalities can be positive or negative, and occur on the supply side or the demand side. As an example, some forms of construction produce positive externalities. Building a new luxury high-rise condominium in a neighborhood can bring in more customers (the new residents) to local businesses (a positive supply-side externality) and might raise property values (a positive demand-side externality). Sometimes these benefits are referred to as spillovers, as in Xerox's PARC's developments in the 1970s of GUIs, the computer mouse, laser printers, WYSIWYG text editors and more were technology spillovers that helped other companies, like Apple and Microsoft, produce revolution technologies, but did less to serve Xerox. 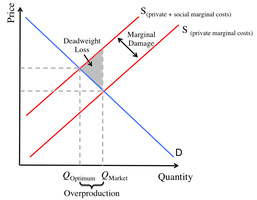 Supply and Demand Curve with a Pollution Externality

Externalities are a type of market failure where the market does not allocate resources efficiently. For instance, the graph to the right is of a negative supply externality. The producer is providing some good according to their private marginal cost, but there is a gap between that and what society pays for the production of that good. Again in the case of pollution, this Deadweight Loss can take the form of higher medical costs for the nearby population, contaminated drinking water that has to be cleaned up, harming crop production, etc. and is absorbed by society, with the difference between what the producer pays and the what the overall society + the producer pay called the marginal damage. Externalities distort the supply and demand curve, instead of the supplier bearing the full costs and benefits of an externality like pollution (the optimum price), the market pays an artificially high or low equilibrium price.

Sometimes, governments can step in to rebalance externalities. For instance by regulating the amount of pollution by factories and making those companies pay for clean up efforts, or by giving tax breaks to large building projects that bring in additional revenues to the community. Other times, markets rebalance externalities themselves. Private individuals can confront polluters and demand compensation. Either way, this is called internalizing the externality, i.e. forcing the supply and demand curves to adjust according to the total social marginal costs and benefits. 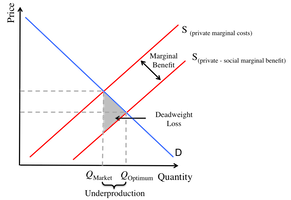 Production Externalities
XEROX PARC's technology developments are a good example of a positive production externality. In this case, XEROX developed technologies that other companies and organizations used in their own products. This saved these "other companies" research and development costs; it created a marginal benefit to society that the private company, XEROX PARC, did not receive. Because of this, XEROX PARC underproduced products from these technologies. As the graph to the right shows, the supply curve was higher than the market's supply curve. In this specific example, a company like Apple or Microsoft, which allegedly got the ideas for GUIs, mice, and other technologies from XEROX PARC, would have a supply curve closer to the social marginal cost supply curve.

A company who pollutes the drinking water with lead, is creating a negative production externality. They are not paying the costs of their pollution, so can produce more supply at lower costs than they should if they were fully internalizing all costs.

Suppose a paper mill pollutes lead into the Flint River. This paper mill produces reams of paper at $5.00/ream and does not pay for the cost of the lead pollution in the river. If the town of Flint Michigan gets it's water supply from the Flint River, and it costs $1.00 to remove lead equal to the output of one ream of paper, i.e. per ream of paper produced the town of Flint Michigan spends $1.00 to remove lead from it's drinking water, what does a graph of the supply and demand curves look like? How would you calculate the loss, the total social costs? And what would you need to know to calculate it? 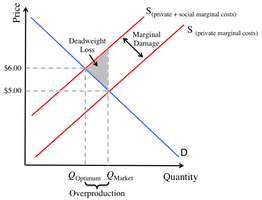 This is the same graph as above, with the Optimum price at $6.00, not the $5.00 price this paper mill is able to charge. There is a marginal damage of $1.00/ream of paper produced, so we would need to know what the overproduction is. Then we'd calculate the loss, essentially the grey triangle in the above graph. That would be the area of a triangle in the case of linear supply and demand curves, and differential equations in the case of polynomial curves. This is one reason economists tend to simplify supply and demand curves down to linear functions.

A luxury condo builder causing neighboring real estate values to increase is a good example of a positive consumption externality. The builder is creating a marginal benefit that it does not share in.

Unfortunately, you're the first into the market, and know that apartment prices are lower now than they will be after you build your condos. A real estate expert estimates that, at the present moment, demand will only allow you to get $200K per condo you build. But that after you build and sell your condos, demand will increase, and the market would be willing to pay $250K/condo. What's the marginal benefit you're relinquishing to the market? 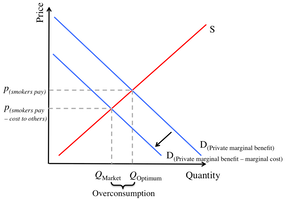 A negative consumption externality might come from those who smoke. Secondhand smoke harms others, but the smoker doesn't pay for it. If smokers had to pay some sort of fee to those who suffer through their secondhand smoke, they amount they'd be willing to pay per pack would decrease to reflect this fee, and the consumption of cigarettes would decrease. Government taxes on the sale of cigarettes attempt to internalize this cost, as discussed below.

Sometimes markets correct for externalities by internalizing the price. In the private markets, The Coase Theorem sets conditions on how this can happen. Namely, if there are well defined property rights, and an externality can be traded against with costless bargining, then negotiations between externality creator and the affected party will lead to a Pareto efficient outcome. In the case of the Flint Michigan pollution example above, under property rights, the town of Flint Michigan would have rights to clean water and would go to the polluting paper milll demanding some form of compensation. They might ask for compensation equal to the cost of removing lead, ask for the polluter to remove the lead themselves and bare this cost, or they might accept a monetary payment and distribute it so that residents can purchase clean water from another source.

However Coasian solutions are not always possible. Maybe the paper mill isn't the only polluter, maybe the damage is not easily calculated, maybe the town asks for more in damage than the paper mill can bare - that if the paper mill had to pay the cost of lead pollution in the first place it never would have existed. 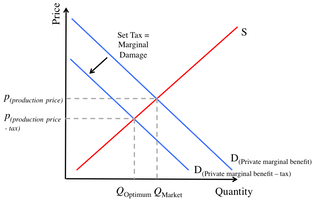 Often times, that's were governments step in. Governments have a number of ways to correct for externalities. Regulations, like environmental protection laws, patent laws, and product safety standards can prevent producers from generating negative production externalities or taking advantage of other companies to create a positive production externality for themselves. Also, governments can levy taxes and provide subsidies to manipulate prices to their optimum level. For that luxury condo-builder, governments could provide tax breaks or subsidies to encourage development. Or, in the case of smokers, governments can and do sometimes levy taxes. In the graph to the right, the demand curve shifts down. Consumers now have to pay both the supplier and the government, and are therefore not willing to pay as much to the suppliers. Here, the government is correcting the price and quantity consumed to an optimum price that reflects the social costs of smoking. 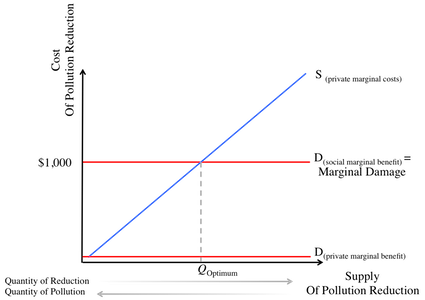 What would a tax look like in this scenario? (What would the tax be and how would it function?) How about regulation? Which would be better?

Tax: This would relatively straightforward, the government would tax polluters $1,000 per unit of pollution, and if it cost the polluters less than $1,000 to stop a unit of pollution (for instance if it cost a paper mill $500 to switch to a non-chlorine bleaching solution for one unit of paper production) then they would do it, otherwise they'd pay the tax (for instance if it cost $2,000 to collect and store water pollution).
Regulation: This is even more straightforward, the government would simply regulate polluters down to QOptimum​ amount of pollution.
If everything is known, and Marginal Damage is a neat flat linear function, then taxation is actually the easiest. The marginal damage is $1,000 so they set a tax at that level. Whereas, with regulation, the government needs to determine the QOptimum​, so must know the what the function for the polluter's marginal costs, must calculate the reduction that $1,000 cost, and then set a target there.
This becomes trickier when there are multiple polluters and if the marginal damage is not a non-sloping linear function.

Tax: Establish a tax of $1,000 per ton of COX2​ produced Fair Regulation: Demand both plants cut 200 tons of COX2​ pollution 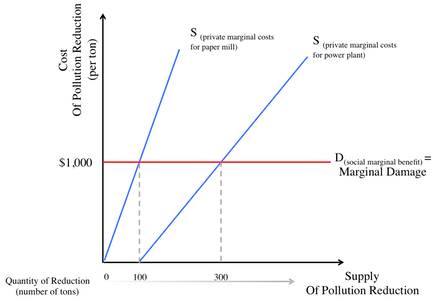 Suppose that there are two polluters in a city, both releasing COX2​ into the atmosphere. One is a paper mill and the other is a power plant. The marginal damage from each ton of COX2​ they produce is $1,000, but they have different marginal costs to reduce that pollution, as represented by the graph to the right.

Another solution to the above Try-It-Yourself problem with the power plant and the paper mill, would be for the government to establish a carbon tax credit that could be traded, and grant both polluters an equal amount of them. For instance, 200 credits to both polluters. Such a credit would allow the paper mill to produce 200 tons of pollution, then trade for more credits. Because the power plant has a lower cost of pollution reduction, it could afford to reduce pollution by one unit for some cost below $1,000, say $750, and sell that credit to the paper mill for $1,200. The power plant would make some money from this trade, decreasing their costs of pollution reduction, and the paper mill would be willing to buy this credit, allowing it to pollute one more ton, because the cost of that credit is lower than the cost for it to reduce pollution. Some economists believe that this is actually the most efficient means for the government to induce polluters to internalize the externality of pollution, and carbon credit trading is a common regulatory strategy in the US today.