In markets, Pareto Efficiency occurs when no other allocation of resources can occur to make someone better off without making someone else worse off. It is a minimal definition of efficiency and should not be confused with equitability. For instance, in a market with two people who both have an unquenchable love of chocolate, one of them having all of the chocolate is Pareto efficient (even though this is a monopoly) because giving one piece of chocolate to the second person makes the first person worse off. Generally, society would not consider this an equitable distribution, it is not socially optimal. But Pareto efficiency is a useful model in economics for determining whether a system or market is at an efficient state.

What is the Pareto efficient distribution of these two resources in this market?

These goods can be distributed in a Pareto efficient manner if: Either 1) Person A has no cookies, or 2) Person B has no chocolate.

The reasoning why gets back to the definition of Pareto efficiency. Is there a redistribution where either person better off and the other person not worse off? Like in the case above, just taking resources from one to give to the other doesn't work, the person who loses the resources is worse off, no matter if it was their favorite or not.

So the question is about trading. Since Person A likes cookies 1/2 the amount she likes chocolate, and Person B likes chocolate 1/2 as much as she likes cookies, then a trade of cookies from A for and equal amount of chocolate from B would make them both better off. So if either has the other's favorite resource, then they'd be able to trade and Pareto optimize the initial distribution.

Also, like the above example, an initial distribution where all of the resources are possessed by one person is Pareto efficient. 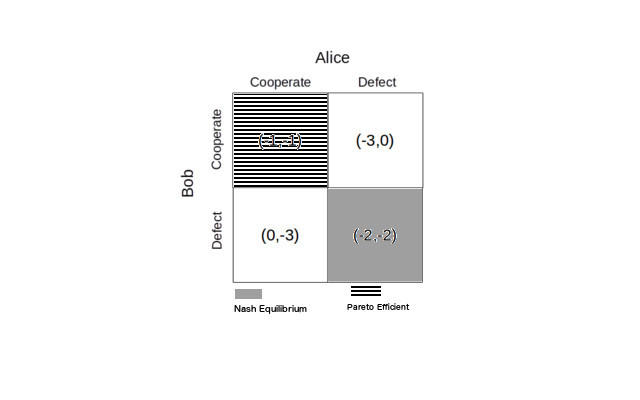 The traditional version of the prisoner's dilemma has two suspected criminals choosing to either Cooperating with their partner by staying quiet, or Defecting on their partner by blaming them for a crime. Neither knows what the other will choose to do until after they've both made their final decision. In the image to the right, these criminals are Alice and Bob and, if one defects on the other then the other gets 3 years in prison, but the defector gets 0 years; if both defect on the other, then both get 2 years in prison; and if both cooperate with each other, (i.e. neither talks to the police) then they only get 1 year in prison each.

Traditionally, in the Nash Equilibrium solution, the line of reasoning goes like the following:

Suppose you are Alice and you have to decide to Cooperate or Defect on Bob. You think about what would be best depending on Bob's choice.
If Bob chooses to Defect on you, then your best bet is also to Defect (you'll only get 2 years versus the 3 years if you cooperated).
If Bob chooses to Cooperate, then your best bet is again to Defect (you'll get 0 years, versus the 1 year if you also cooperate).

Which means that the Nash Equilibrium solution is for a player to always Defect.

However, the Pareto efficient outcome would be for neither to Defect, and both to Cooperate. Relatedly, all other solutions are Pareto optimal, they cannot be improved upon without making one player worse off. For instance one Defecting and the other Cooperating can be made better for the Cooperator, but at the expense of the Defector.

Under ideal conditions, Free Markets lead to Pareto efficiency. Such ideal conditions include: there are no externalities, markets exist for all goods, all markets are in equilibrium, markets are perfectly competitive, all participants have perfect information, and transaction costs are negligible.

Let's simplify the idea of free markets and Pareto efficiency down, and prove that:
If every participant in a market with a currency cares only about the resources they posses, then a competitive equilibrium (the basis for free markets) is a Pareto efficient allocation of resources.
*It should be noted: that the participants caring only about their resources is important, as opposed to caring about the act of trading the resources; that such a market may not be equitable, as stated before; and that this is not the only Pareto efficient outcome,

Proof by contradiction: Suppose that it is Pareto efficient to sell the good at something other than equilibrium point. This would imply that either more of the good were sold/purchased than desired or less were sold/purchased.
- If more were purchased, then one buyer had to spend (>p) dollars to buy the good, they had to spend more than they believed the good was worth and are therefore worse off. (Not Pareto Efficient)
- If one unit less of the good was purchase than the equilibrium, then one seller missed an opportunity to trade the good at a price above (>p) that seller's perceived value of the good and they're worse off. (Not Pareto Efficient)

If there's one thing everyone knows about economists, it's that they love pink cupcakes. Somewhere, deep in the bowels of Brilliant University, four economists named Smith, Marx, Friedman, and Keynes have formed their own little free market. In this market, Smith and Marx each have 1 pink cupcake, and $0. On the other hand, Friedman and Keynes have $10 each. The table below shows the value they each place on one cupcake.

Marx loves cupcakes but believes that they're tools of the proletariat, so values them at $0 on political grounds.

In 1970, economist Amartya Sen published a paper entitled "The Impossibility of a Paretian liberal" [1] which outlined a paradox that proved, that no social system can simultaneously be: - Committed to freedom - Pareto Efficient - Be capable of functioning

Also called the liberal paradox, it supposes a society of two individuals, Lewd and Prude. There is one resource in this society, a novel of Lady Chatterley’s Lover, by D.H. Lawrence, that must either x be given to Prude to read, y given to Lewd to read, or z be trashed unread. The paradox asks us to suppose that Prude thinks the book should be trashed unread (option z), but that if it must be read, he should be the one to read it (option x) because he will get no enjoyment out of it, which is a superior outcome to Lewd reading it (option y), because Lewd will enjoy reading the perverse book. And yes, it’s true that Lewd would enjoy reading it (option y), but that he would enjoy it even more if Prude was forced to read it (option x), for his own perverse reasons, and would least enjoy no one reading the book (z).

A social planner must then decide what to do. Under typical liberal paradigms, even ones that allow for a condition of unrestricted domain, as this problem does (that one individual's preferences aren't limited only to themselves), the planner could suppose that no one should read the book. After all, Prude does not want to read the book, so should not be forced to. Or, under liberal values, since Lewd would enjoy reading the book, he should be allowed to do so. According to Sen, "Thus, in terms of liberal values, it is better that no one reads it rather than [Prude] being forced to read it, and it is still better that [Lewd] is permitted to read the book rather than no one reading it."

Sen himself considers this theory to be similar to Arrow's impossibility theorem, and it's an important one for suggesting that economic efficiency and social morality sometimes clash.

As mentioned above, there are other models for determining whether a market or situation is efficient.
- Nash Equilibrium: being one model, where participants take into account other participants decisions and equilibriums.
- Efficient Market Hypothesis: A hypothesis that prices in a competitive market will reflect all available information.

But there are a number of variations or adaptions of Pareto efficiency that also crop up:
- Bayesian Efficiency: Determining the Pareto Optimal solution isn't always possible, and Bayesian Probability can be useful to find Pareto optimality with incomplete information.
- Kaldor–Hicks Efficiency: an improvement to Pareto efficiency that states that if a re-allocaiton of resources makes some people better off, those better offers could, hypothetically, compensate those that are made worse off, and achieve to a Pareto-improving outcome.