Huffman coding is an efficient method of compressing data without losing information. In computer science, information is encoded as bits—1's and 0's. Strings of bits encode the information that tells a computer which instructions to carry out. Video games, photographs, movies, and more are encoded as strings of bits in a computer. Computers execute billions of instructions per second, and a single video game can be billions of bits of data. It is easy to see why efficient and unambiguous information encoding is a topic of interest in computer science.

Use the encoding described in the tree below to encode "CAB". 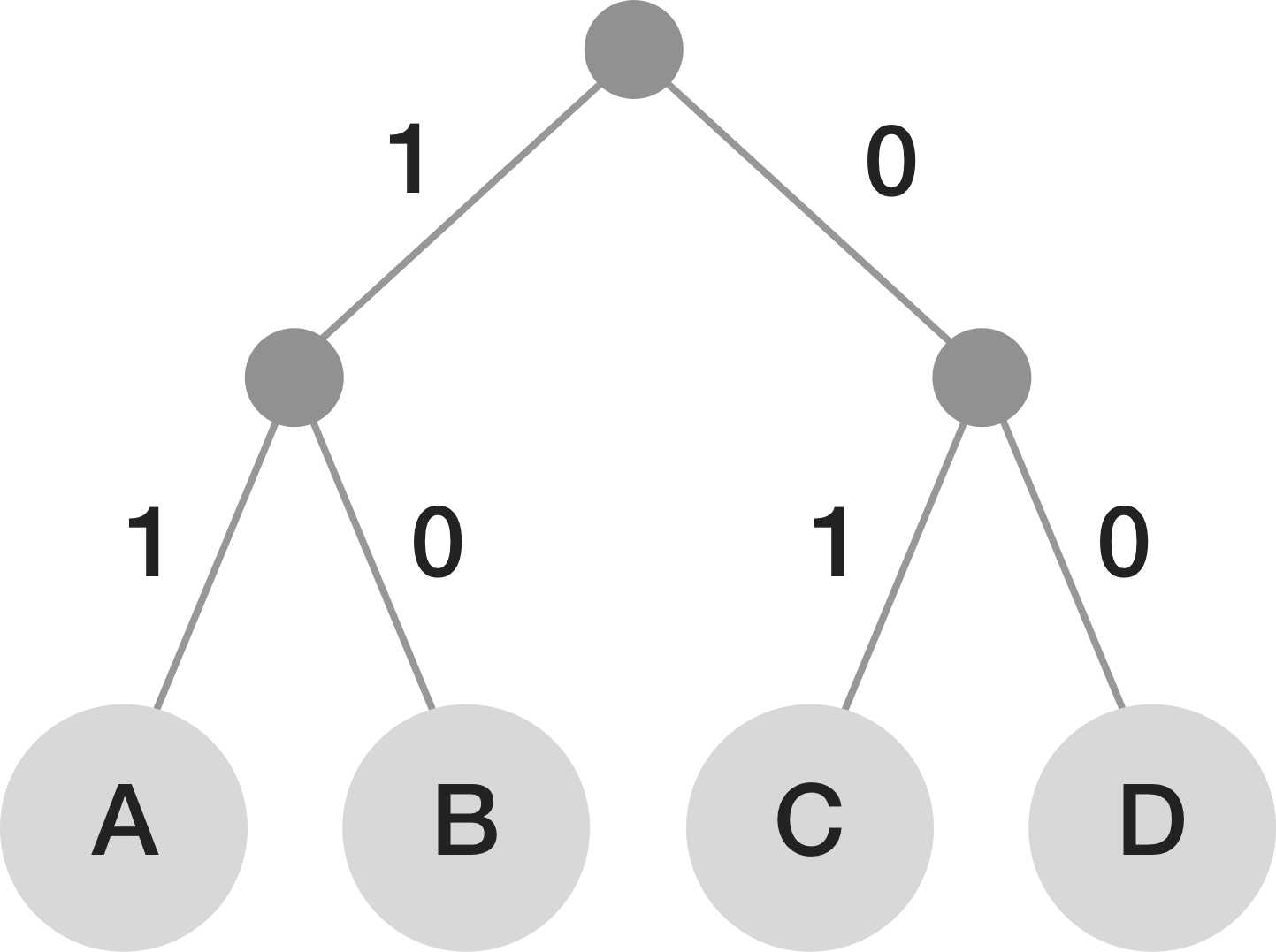 Encodings can either be fixed-length or variable-length.

A fixed-length encoding is where the encoding for each symbol has the same number of bits. For example:

A variable-length encoding is where symbols can be encoded with different numbers of bits. For example:

Explain why the encoding scheme below is a poor encoding.

As you can see from the encodings of the messages above, there are cases where the same binary string encodes different messages. This encoding scheme is ambiguous because after we encode one message, its binary representation is not unique to that message only. For example, with the encoding above, “BB” is encoded as “11” but “11” is also the encoding for “C”. □​

Which of the choices cannot be encoded as 01110 under the following encoding scheme?

The encoding below is unambiguous, but inefficient since there exists a shorter (and still unambiguous) encoding of these letters. Give an equivalent but shorter encoding.

Each letter has the same number of bits that encodes it. Therefore, we know that every 4 bits in a string will encode a letter. Unlike the example above (with variable-length encoding), we do not have to worry about ambiguity because each letter has a unique binary assignment of the same length. For example, if B were encoded as 1 and C were encoded as 11, upon seeing a message 11 we could not tell if the sender intended to send BB or C. With the fixed-length encoding above, there is no possible overlap between encodings: 0000 will always be read as an A, and 1010 will always be read as a C.

To represent x symbols, we need log2​(x) bits because each bit has two possible values: 1 or 0. Therefore, with x bits, we can represent 2x different symbols.

This problem has 4 symbols, so we only need log2​(4)=2 bits to do this. Therefore, our encoding can be as follows:

How many bits are needed to represent x different symbols (using fixed-length encoding)?

To represent x symbols with a fixed-length encoding, log2​(x) bits are needed because each bit has two possible values: 1 or 0. Therefore, with x bits, 2x different symbols can be represented.

Huffman code is a way to encode information using variable-length strings to represent symbols depending on how frequently they appear. The idea is that symbols that are used more frequently should be shorter while symbols that appear more rarely can be longer. This way, the number of bits it takes to encode a given message will be shorter, on average, than if a fixed-length code was used. In messages that include many rare symbols, the string produced by variable-length encoding may be longer than one produced by a fixed-length encoding.

As shown in the above sections, it is important for an encoding scheme to be unambiguous. Since variable-length encodings are susceptible to ambiguity, care must be taken to generate a scheme where ambiguity is avoided. Huffman coding uses a greedy algorithm to build a prefix tree that optimizes the encoding scheme so that the most frequently used symbols have the shortest encoding. The prefix tree describing the encoding ensures that the code for any particular symbol is never a prefix of the bit string representing any other symbol. To determine the binary assignment for a symbol, make the leaves of the tree correspond to the symbols, and the assignment will be the path it takes to get from the root of the tree to that leaf.

What encoding do we get from the following Huffman tree? 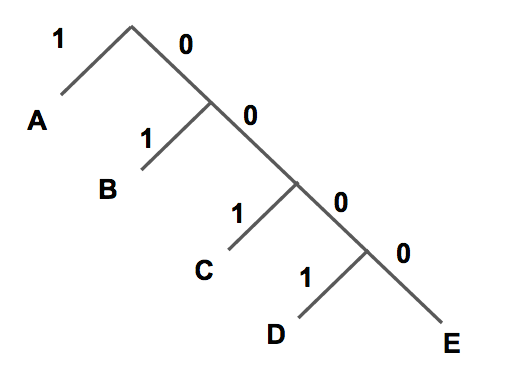 The Huffman coding algorithm takes in information about the frequencies or probabilities of a particular symbol occurring. It begins to build the prefix tree from the bottom up, starting with the two least probable symbols in the list. It takes those symbols and forms a subtree containing them, and then removes the individual symbols from the list. The algorithm sums the probabilities of elements in a subtree and adds the subtree and its probability to the list. Next, the algorithm searches the list and selects the two symbols or subtrees with the smallest probabilities. It uses those to make a new subtree, removes the original subtrees/symbols from the list, and then adds the new subtree and its combined probability to the list. This repeats until there is one tree and all elements have been added.

Given the following probability table, create a Huffman tree to encode each symbol.

The two elements with the smallest probability are D and E. So we create the subtree: 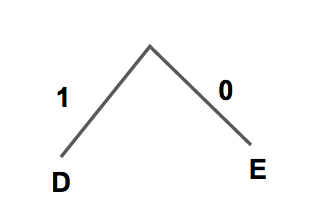 The next two smallest probabilities are DE and C, so we create the subtree: 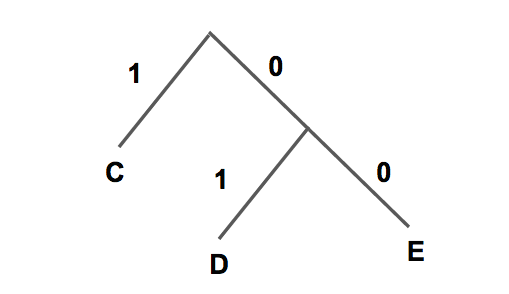 The next two smallest probabilities are A and B, so we create the subtree: 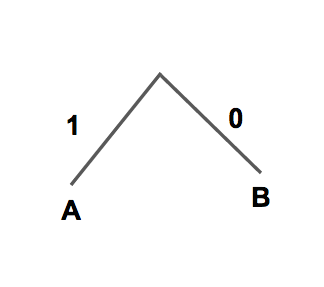 Now, we only have two elements left, so we build the subtree: 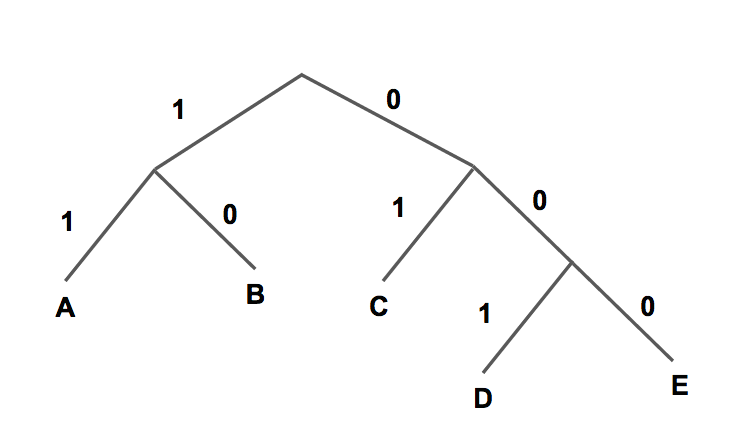 The probability of ABCDE is 1, which is expected since one of the symbols will occur.

Here are the encodings we get from the tree:

What is the correct Huffman tree for the following symbol/probability set? 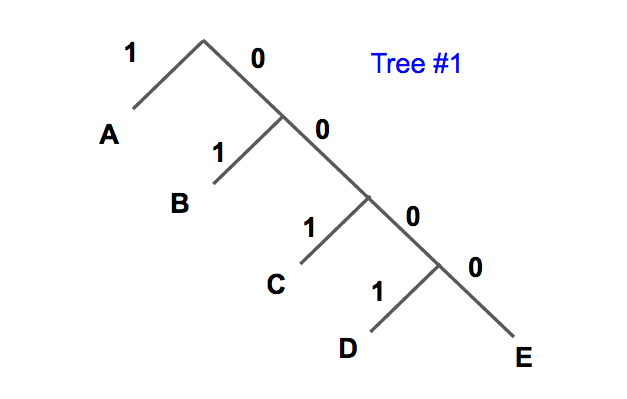 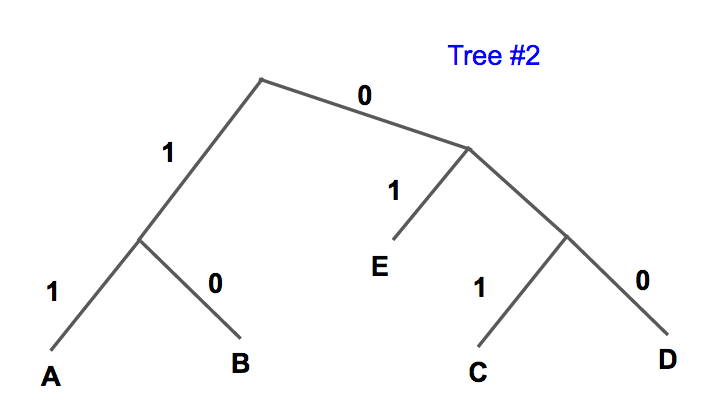 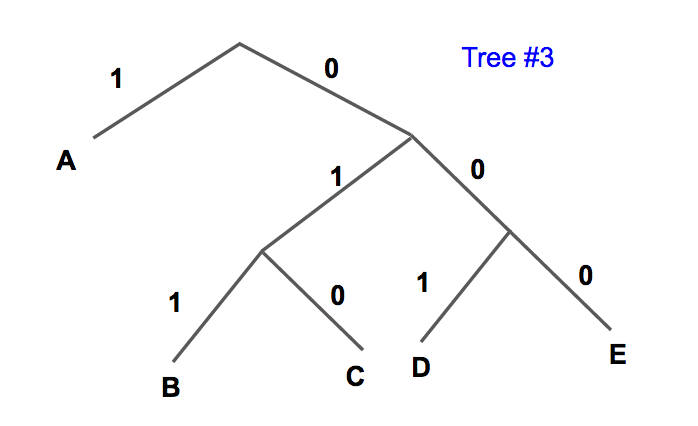 Huffman coding is optimal for encoding single characters, but for encoding multiple characters with one encoding, other compression methods are better. Moreover, it is optimal when each input symbol is a known independent and identically distributed random variable having a probability that is the inverse of a power of two. [1]