Ion-ion interactions are an attractive force between ions with opposite charges. They are also referred to as ionic bonds and are the forces that hold together ionic compounds.

Like charges repel each other and opposite charges attract. These Coulombic forces operate over relatively long distances in the gas phase. The force depends on the product of the charges (Z1​,Z2​) divided by the square of the distance of separation (d2)

If a vacuum contains two oppositely-charged particles (such as a sodium cation and a chloride anion), they will be attracted to each other, and the force will increase as the two articles approach each other. Eventually, they will stick together and a considerable amount of energy will be required to separate them again. They form an ion-pair, a new particle which has a positively-charged area and a negatively-charged area. There are fairly strong interactions between these ion pairs and free ions, so the clusters grow. For example, a saturated solution of sodium chloride contains more ions than the solution can support, and sodium cations will start attracting chloride anions to form solid salt crystals. 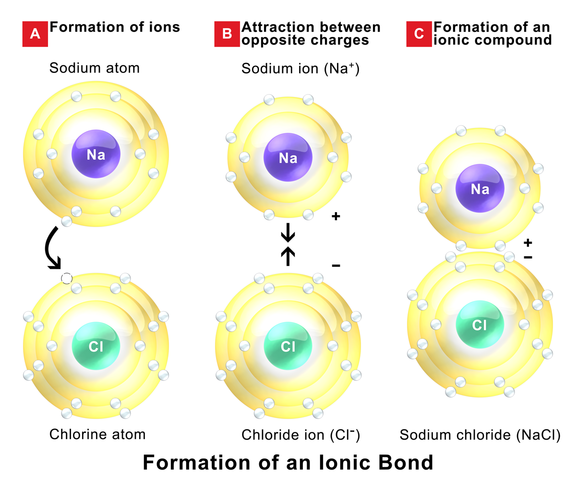 Ion-ion interactions are seen in precipitation reactions, where a solid forms upon the mixing of two aqueous solutions.