Faraday's law forms the basis for describing how much of our modern world operates, including how electric current is generated and how modern electronic devices and components function.

Consider a crude device called a crystal radio, which essentially consists of a coil of wire and an earpiece. Why is it that the radio runs perfectly (although perhaps playing on the quiet side) without any external batteries or other power? As it turns out, the air is filled with electromagnetic waves of various spectra, including radio waves. Such waves contain oscillating magnetic (and electric) fields, and changing magnetic fields can lead to electric fields in coils of wire in the form of electric current.

As one of the fundamental relationships of electricity and magnetism, Faraday's law, describes how time-varying magnetic fields produce electric fields.

Much work had been done on electrostatics by the beginning of the nineteenth century, but comparatively little had been done on magnetic fields. It wasn't until around 1820, for instance, that Oested first discovered that electric current produces a magnetic field, which is arguably the beginning of magnetostatics (apart from crude studies of naturally occuring magnets in antiquity).

Thus, it is perhaps surprising that less than two decades later, Michael Faraday had already begun to describe not only changing magnetic fields (thus beginning electrodynamics) but also, as a consequence, the interaction of electric and magnetic fields. Faraday discovered that, in general, a changing magnetic field leads to an electric field, a phenomenon called electromagnetic induction (the electric field is "induced"). The quantitative description of induction is thus named Faraday's law in honor of its discover.

The vector labeled 'normal' is our unit vector n, and the magnetic flux through the plane area A is defined to be

In essence the dot product projects our original area A onto a plane perpendicular to B.

Magnetic flux through a surface patched together with small planes (think of something like a geodesic dome), is just the sum of that through each 'patch.' To a patch of surface, one assigns a vector ai​ that indicates the normal (perpendicular) to the surface. In addition, the magnitude of each ai​ is defined to be the area of the corresponding patch.

The magnetic flux, Φi​, through a patch is given by the dot product, which calculates the component of Bi​ parallel to ai​:

Therefore, the total magnetic flux through a surface composed of many small patches, ai​, is the sum over all patches:

As the ai​ become vanishingly small, as in the case of a smooth surface, the sum is replaced with a surface integral:

Fortunately, the magnetic flux can often be computed without resorting to computing the integral explicitly. Generally, the calculation for magnetic flux is quite simple because one mostly considers flat loops. However, after the next topic, Faraday's Law, is discussed, it will be necessary to allow the smooth surface S to be arbitrary to determine the differential form of Faraday's Law in a subsequent section.

A small, flat loop of wire of area A is oriented perpendicular to the uniform magnetic field inside a cylindrical solenoid with turns per unit length n and current I. What is the flux through the loop?

In this case, B⋅da is constant, so the flux is simply Φ=BA=μ0​nIA.

where Φ is the magnetic flux through the loop (recall that emf points in the opposite direction as the voltage). In general, one determines Φ as a function of t, which allows for the calculation of E.

Embedded in Faraday's law is the direction of the induced current in the loop. As with the Biot-Savart law and Ampère's law, the orientation of the loop is defined such that a counterclockwise traversal of the loop (relative to a) is positive. Thus, the negative sign on dΦ/dt indicates that an increase in flux through the loop leads to a clockwise flow of current in the loop. Likewise, a decrease in flux through the loop (positive increase relative to the opposite side of the loop) leads to a counterclockwise flow of current.

It is easy to remember this sign convention using the so-called right-hand rule. If one's thumb points in the direction of magnetic flux increase, then the current flows in the opposite direction to the curl of the fingers (opposite due to the negative sign in Faraday's law). 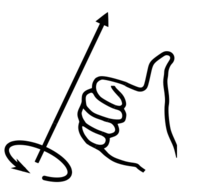 Note that the loop itself produces a magnetic field. One can verify that the magnetic field is always produced in the direction of decreasing flux (again, due to the negative sign). In some sense, one can think of the induced magnetic field as "opposing" the change in the external magnetic field, a result often referred to as Lenz's law.

A small, flat loop of wire of area A and resistance R is oriented perpendicular to the uniform, upward-pointing magnetic field inside a cylindrical solenoid with turns per unit length n and current I(t)=I0​+Bt, where I0​ and B are constants. What is the size and direction of the current Iloop​(t) induced in the loop as a function of t?

As in the previous example, for a given t, B⋅da is constant, so the flux through the loop is just

It follows that the current induced in the loop is of magnitude μ0​nAB/R and points clockwise (due to the negative sign), which can also be verified using the right-hand rule.

A small, flat loop of wire of area A is initially oriented parallel to a uniform magnetic field of magnitude B. If the loop rotates with angular velocity ω, what is the magnitude of the induced emf E in the loop?

In effect, one can generate electricity by mechanical rotation of a wire loop in a magnetic field.

Recall that that the emf E, around any closed path, C, is defined in the opposite direction as the voltage, namely

Let C be the boundary curve of an arbitrary smooth, non closed surface S. It follows, from Faraday's law, that the magnetic flux through S,

and the emf around C are related by

As was done with Ampère's law, one can invoke Stokes' theorem on the left side to equate the two integrands:

Again, one can argue that since the relationship must hold true for any arbitrary surface, S, it must be the case that the two integrands are equal, and therefore