One of Maxwell's equations, Ampère's law, relates the curl of the magnetic field to the current density and is particularly useful for current distributions with high degrees of symmetry.

The Biot-Savart law requires summing many infinitesimal current elements and thus allows for the direct calculation of any configuration of magnetic field due to current-carrying wires. As with Coulomb's law in electrostatics, this type of sum can get quite complicated.

Analogous to electrostatics, in which Gauss's law allows for the convenient calculation of the electric field of systems with symmetry, in magnetostatics Ampère's law can be used to readily determine the magnetic field of symmetric systems of current elements.

Recall that the motivation for Gauss's law (in its integral form) makes a statement of the relationship between regional charge distribution and the electric field summed over a surface (in the form of electric flux). Likewise, when considering paths of current elements, one might consider the magnetic field over an entire path. (In magnetostatics, it intuitively makes sense to consider paths (and not surfaces as with electrostatics), as one is concerned with current-carrying paths.)

Just as the electric flux is computed over a Gaussian surface, with an alternative statement of the Biot-Savart law, one might aspire to sum the magnetic field over a closed directed path, or a so-called Amperian loop. And, similarly, instead of considering the total charge contained inside a Gaussian surface, here one considers the total current enclosed by an Amperian loop. As with a Gaussian surface, with an Amperian loop there is an orientation to the loop. In general, one defines the positive orientation of the loop as the counterclockwise direction. This convention can be remembered by curling the fingers on one's right hand around one's thumb (the so-called "right-hand rule").

To see how this might be related to current-carrying elements, consider the Amperian loops shown below, which are of different sizes. A single current-carrying wire (pointing out of the page) passes through each figure, as shown. 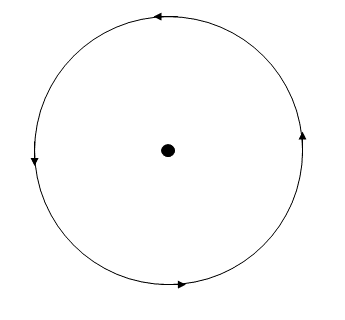 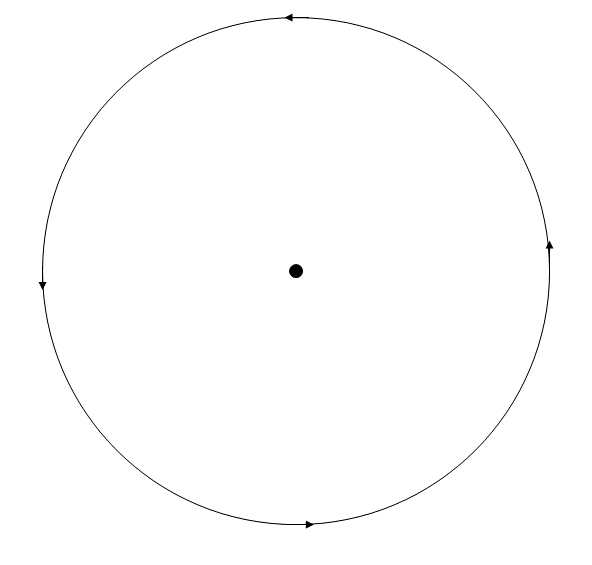 which is a so-called line integral. In a great many cases (such as constant B⋅ds), the integral will not have to be computed directly from the definition. Instead, symmetry arguments may suffice to obtain the value of the integral.

which is independent of r. Thus, it is not unreasonable to consider that perhaps the physical dimensions of a loop does not matter so much as the current I contained with the loop. If a loop is farther away from a current source, then its path is longer, but the corresponding field strength decreases proportionally with the increase in path length. 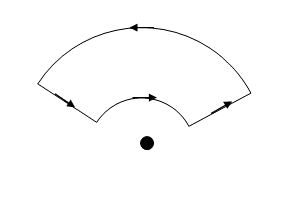 The field through the two circular arc segments cancel by the previous reasoning. Along one of the arcs, the sum of the field over the loop is some fraction of μ0​I, while along the other the sum must be the exact opposite (but same magnitude) due to the reversed direction of the path. Furthermore, along the radially oriented segments, the sum of the field must be zero because all of the components of the field are perpendicular to the radial direction. Thus, the sum of the field of the loop is zero. In this case, no current passes through the interior of the loop, and no net magnetic field arises when summed over the loop. A similar argument could be made for any general loop that does not contain any current elements.

Indeed, by drawing an analogy with Gauss's law, one might conjecture the following:

The integral form of Ampère's law can be stated as follows. It can be shown to be equivalent to the Biot-Savart law.

Given a counterclockwise-oriented closed loop (Amperian loop) inside which a total current Iencl​ is enclosed,

As with Gauss's law, which can be used to calculate the total charge distribution from the field or vice versa, Ampère's law can be used to determine the field or enclosed current in situations with some symmetry. A clever choice of Amperian loop is often needed to exploit the symmetry of a given system.

Note that care must be taken to orient the loop correctly with respect to the direction of the current. With the loop oriented counterclockwise in the page, all currents passing out of the page are positive, while those going into the page are negative.

Field of a current-carrying wire:

To calculate the magnetic field from a current-carrying wire of current I, we choose a circular Amperian loop of radius r centered at the wire. Because B⋅ds is constant, it follows that

where B is the magnitude of the field.

Field of a solenoid:

Suppose that one has a cylindrical solenoid, a coil of wire wrapped around a cylindrical core. A side view of the solenoid is as shown below. If the solenoid (measured along its axis) is long compared to its radius, then the field inside the solenoid near the middle is very nearly constant due to symmetry.

The field integrated over the two sides of the loop perpendicular to the axis of the solenoid must come out to zero, for both sides feel the same field at all corresponding points along their paths but in opposite orientations. If the length of the side of path inside the solenoid is L, then F gives

In other words, the field strength depends only on the current and density of turns, not the total number.

If both sides of the Amperian loop parallel to the axis are instead chosen to reside outside of the solenoid, then instead Ampère's law gives

so there is zero field outside of the solenoid.

Field inside a thick wire:

A thick wire of outer radius R carries steady current distributed uniformly over the wire. What is the field inside and outside of the wire if the total current is I?

Once again, we choose a circular Amperian loop of radius r centered at the axis of the wire.

Outside the wire (r>R), Ampère's law gives the same result as for a standard thin wire, or

Inside the wire (r≤R), the total current enclosed is I(r2/R2), so Ampère's law gives

Since the total current increases quadratically with r while the decay of the field (for the current elements inside the loop) occurs proportionally to 1/r, the field as a whole increases linearly with r. 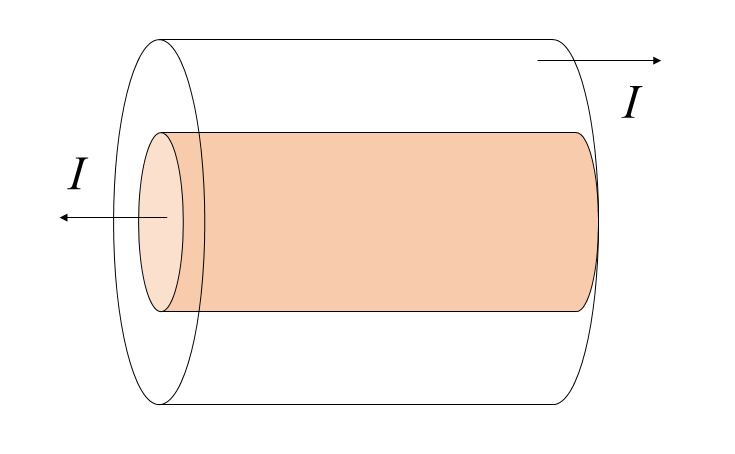 A coaxial cable consists of an inner solid cylindrical wire of radius 2mm and an outer conducting hollow cylinder of radius 4mm, which each carry a current of magnitude 100mA. If the currents travel in opposite directions, what is the magnitude of the magnetic field outside of the cable a distance of 1cm measured perpendicularly from the central axis of the inner wire?

There are two solenoids X and Y with lengths 20 cm and 40 cm, respectively. If the current intensities flowing in X and Y are 1 A and 2 A, respectively, what is the ratio of the intensities of the magnetic fields induced inside X and Y?

The number of turns of the two solenoids are the same.

To express Ampère's law in a local form, one can use Stokes' theorem to rewrite the line integral ∫B⋅ds in terms of the surface integral of the curl of B:

But Ampère's law says that

where J is the current density. It is the generalized, continuous version of the current I. Of course, the surface integral in both equations can be taken over any chosen closed surface, so the integrands must be equal:

Maxwell added a term called the displacement current to represent the contribution of the time-varying electric field to ∇×B. The size of the additional term, he reasoned, must be ϵ0​∂E/∂t. In that case, Ampère's law reads

This is the full form of Ampère's law, complete with Maxwell's modifications. Sometimes it is called the Ampère-Maxwell law, although most of the time it is simply referred to as "Ampère's law" proper. Usually, it is clear when ∂t∂E​ is relevant in a given problem, so there is no ambiguity about whether one is referring to the naive or modified form of Ampère's law.

To be sure, in practice the size of the additional term μ0​ϵ0​∂E/∂t is sufficiently small so as to be ignored. To see why, note that the speed of an electromagnetic wave is

so one can also write

In general, ∂E/∂t is much smaller than c2, so the term is not easily measured experimentally.

Even though J=0, with the additional term, Ampere's law now gives

This equation has solutions for E(x) (and corresponding solutions for B(x)) that represent traveling electromagnetic waves. In fact, the equation that has just been derived is in fact in the same form as the classical wave equation in one dimension. In other words, the laws of electricity and magnetism permit for the electric and magnetic fields to travel as waves, but only if Maxwell's displacement current term is added to Ampère's law. Indeed, Maxwell was the first to provide a theoretical explanation of a classical electromagnetic wave and, in doing so, compute the speed of light.

(The general solution consists of linear combinations of sinusoidal components, as shown below.)