The molecular orbital theory is a technique for modeling the chemical bonding and geometry of molecules and polyatomic ions.

Molecular orbital theory helps explain why some compounds are colored, why an unpaired electron is stable in certain species, and why some molecules have resonance structures.

The molecular orbital theory builds off of valence bond theory and valence shell electron pair repulsion theory to better describe the interactions of electrons within a given molecule and the effects that has on the molecule's physical and chemical properties.

The molecular orbitals (MOs) of HX2​ are a simple example system. Each hydrogen atom has a single 1s atomic orbital. Since HX2​ is comprised of two atoms, it has two molecular orbitals. The bonding orbital is an equally weighted sum of the two 1s atomic orbitals and is lower in energy than those orbitals. This is a σ orbital. The waves of the atomic orbitals show constructive interference, meaning there is an increased probability of finding electrons in the center of the σ orbital. The antibonding orbital, σ∗, is shaped by destructive interference between the two atomic orbitals. The result is a node in the middle of the orbital, where there is zero probability of finding an electron.

Atomic orbitals other than s orbitals can interact to form molecular orbitals. Since p,d, and f orbitals are not spherically symmetrical, the orbitals must be plotted on a coordinate system to show how they are oriented in space. The shapes of the orbitals gets increasingly complex as the number of electrons increases.

Energy level diagrams are used to determine whether or not a molecule will be stable. The atomic orbitals of the two atoms are drawn on the sides of the diagram, with the molecular orbitals in the middle. This diagram can be used to calculate the bond order of the diatomic molecule. To find the bond order, subtract the number of electrons in antibonding molecular orbitals. If the bond order is positive, meaning more atoms are in bonding orbitals than antibonding orbitals, the molecule is stable in nature. A zero or negative bond order indicates an unstable molecule that probably does not exist. In general, a larger bond order correlates to a shorter bond length and a higher bond energy. In other words, the larger the bond order, the closer the atoms are to each other and the harder it will be to separate them. 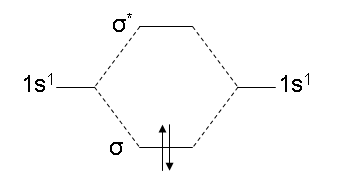 What is the bond order for HX2​?

Number of electrons in bonding MO's: 2

Number of electrons in antibonding MO's: 0

We therefore expect HX2​ to be stable, and it is, in fact, a naturally occurring gas.

Based on bond order, which molecule or ion would you expect to have the shortest bond length and the largest bond energy?

[1] Image from https://commons.wikimedia.org/wiki/File:H2OrbitalsAnimation.gif under Creative Commons licensing for reuse and modification.

[2] Image from https://commons.wikimedia.org/wiki/File:H2str.png under Creative Commons licensing for reuse and modification.

[3] Image from https://commons.wikimedia.org/wiki/File:BondingandAnti-bondinginteractionsofs,p,andd_orbitals.png under Creative Commons licensing for reused and modification.