The valence shell electron pair repulsion model is often abbreviated as VSEPR (pronounced "vesper") and is a model to predict the geometry of molecules. Specifically, VSEPR models look at the bonding and molecular geometry of organic molecules and polyatomic ions. It is useful for nearly all compounds that have a central atom that is not a metal.

Lewis structures only tell the number and type of bonds between atoms, as they are limited to two dimensions. The VSEPR model predicts the 3-D shape of molecules and ions but is ineffective in providing any specific information regarding the bond length or the bond itself.

VSEPR models are based on the concept that electrons around a central atom will configure themselves to minimize repulsion, and that dictates the geometry of the molecule.

It can predict the shape of nearly all compounds that have a central atom, as long as the central atom is not a metal. Each shape has a name and an idealized bond angle associated with it.

The following terms are commonly used in discussing the shapes of molecules: 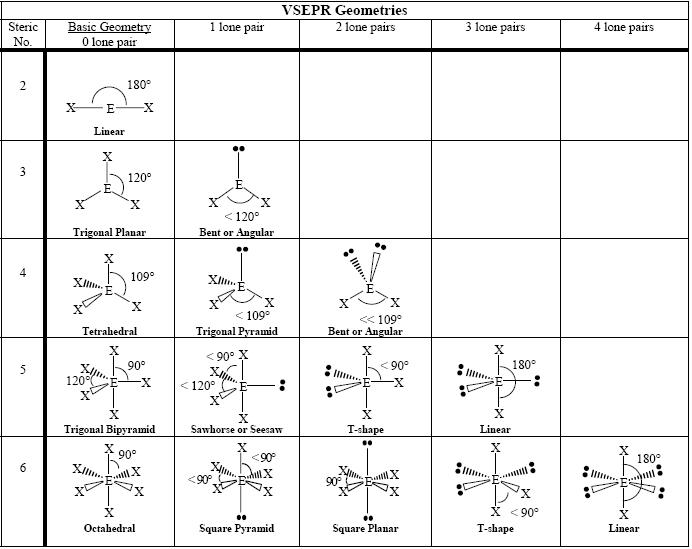 Molecules with the same electron pair geometry may have different molecular geometries.[7]

The central atom has a total of 5 electron pairs, giving it the trigonal bipyramidal geometry. Due to the 3 lone pairs at the 3 equatorial bond positions, the I atoms occupy the central and axial positions. Hence it is linear in shape.

VSEPR notation gives a general formula for classifying chemical species based on the number of electron pairs around a central atom. Note, however, that not all ABn​ species have the same molecular geometry. For example, carbon dioxide and sulfur dioxide are both AB2​ species, but one is linear and the other is bent. Sometimes, the notation is expanded to ABn​Em​ to include lone pair electrons. This can get confusing, because water can be referred to as an AB2​ species or an AX2​E species, depending on the conventions the author or text chooses.

The VSEPR model is not a theory. It does not explain or attempt to explain any observations or predictions. Rather, it is an algorithm that accurately predicts the structures of a large number of compounds.

VSEPR is simple and useful but does not work for all chemical species. First, the idealized bond angles do not always match the measured values. For example, VSEPR predicts that H2​O and H2​S will have the same bond angles, but structural studies have shown the bonds in the two molecules are different by 12 degrees. VSEPR also predicts that group-2 halides such as BaF2​ will be linear when they are actually bent. Quantum mechanics and atomic orbitals can give more sophisticated predictions when VSEPR is inadequate.