RSA is an encryption algorithm, used to securely transmit messages over the internet. It is based on the principle that it is easy to multiply large numbers, but factoring large numbers is very difficult. For example, it is easy to check that 31 and 37 multiply to 1147, but trying to find the factors of 1147 is a much longer process.

RSA is an example of public-key cryptography, which is illustrated by the following example: Suppose Alice wishes to send Bob a valuable diamond, but the jewel will be stolen if sent unsecured. Both Alice and Bob have a variety of padlocks, but they don't own the same ones, meaning that their keys cannot open the other's locks. 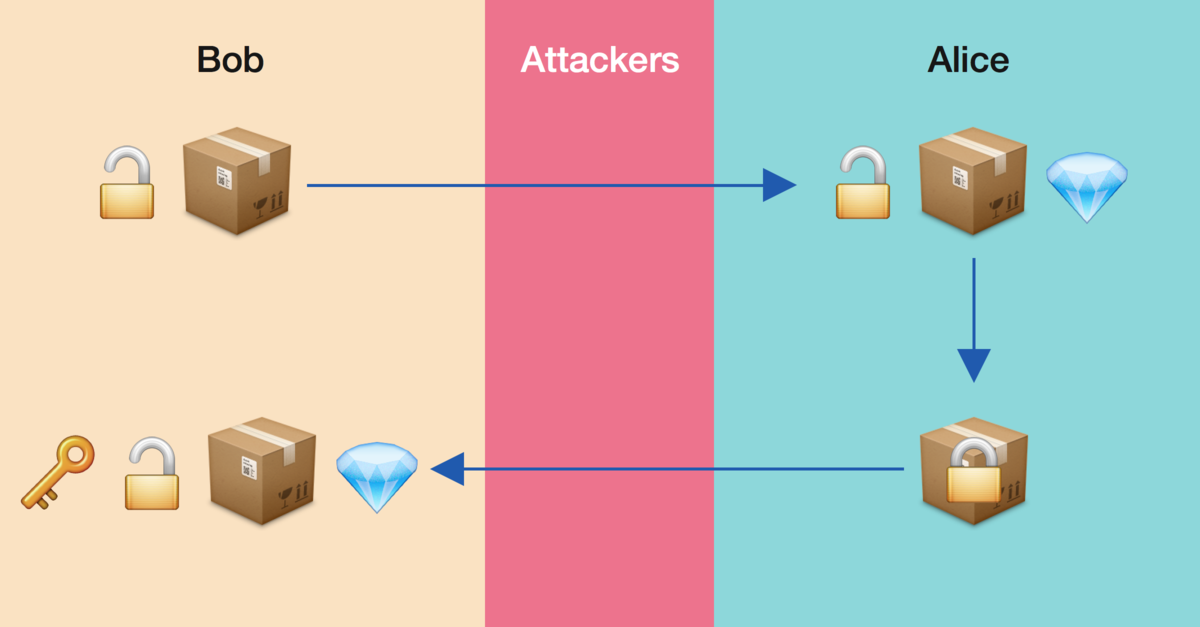 In RSA, the public key is generated by multiplying two large prime numbers p and q together, and the private key is generated through a different process involving p and q. A user can then distribute his public key pq, and anyone wishing to send the user a message would encrypt their message using the public key. For all practical purposes, even computers cannot factor large numbers into the product of two primes, in the same way that factoring a number like 414863 by hand is virtually impossible. However, ​multiplying​ two numbers is much less difficult, so a potential factorization can be verified quickly, as the following multiple-choice problem shows:

Which of the following is the correct prime factorization of 414863?

When the user receives the encrypted message, they decrypt it using the private key and can read the original text. A more detailed and technical explanation follows in the next section.

The implementation of RSA makes heavy use of modular arithmetic, Euler's theorem, and Euler's totient function. Notice that each step of the algorithm only involves multiplication, so it is easy for a computer to perform:

Now that the public and private keys have been generated, they can be reused as often as wanted. To transmit a message, follow these steps:

Note that step 3 makes use of Euler's theorem.

Euler's theorem tells us that mϕ(n)≡1(modn). From the receiver's step 3, we deliberately chose d so that de≡1(modϕ(n)). Note that such a d exists by the definition of e. This means that there exists an integer k satisfying de=kϕ(n)+1. Then

For example, suppose the receiver selected the primes p=11 and q=17, along with e=3.

Now suppose the sender wanted to send the message "HELLO". Since n is so small, the sender will have to send his message character by character.

The rest of the letters are sent in the same way.

Because of the great difficulty in breaking RSA, it is almost universally used anywhere encryption is required: password exchange, banking, online shopping, and even cable television. RSA is also used to ensure websites are legitimate since only the real website would have its private key. It therefore avoids man-in-the-middle attacks, in which an attacker intercepts a connection and shows the user a convincing fake, almost completely. All in all, a vulnerability in RSA would have catastrophic security consequences, so various attacks have been attempted.

You have looked up several people's public keys, some of which are below. Some of them are vulnerable, because they are divisible by the same prime. What prime is that?

Other attacks are similar, taking advantage of poor random number generation. If p and q are too close together, e is so small that me<n, or the private key is too small, then an attacker can efficiently determine the private key.

(You may assume Alice's message is an English word written in capital letters.)

In 1994, MIT mathematician Peter Shor developed a theoretical algorithm for quantum computers that factors numbers exponentially faster than current algorithms do. However, since only small quantum computers have been built, as of 2016 the algorithm has only managed to factor 16-bit numbers (the largest to date is 56153).