Viral replication is the process by which a virus makes copies of itself. It can lead to thousands of new viral particles being released into the host's body, infecting new cells and leading to the symptoms of disease.

Viruses are small and lightweight, roughly 1/10th the size of a bacterial cell. While these traits make viruses more mobile, it means they lack the basic cell structure necessary to replicate themselves.

One metaphor for this is people living in a post-apocalyptic world. At first, all the people live in the forest, and they have to carry everything they need with them to survive: their shelter, clothing, food supply, weapons, and anything else they might need to fight off predators or the elements. These are like normal cells. Then one group, the viruses, stumble across a deserted village. They move from house to house, so eventually they stop carrying their shelters. They realize there is packaged food in some of the houses, and that if they carry a knife to open the packaging, they can get rid of the rest of their hunting equipment and food supplies.

This group, the viruses, can no longer survive in the open elements, because their lifestyle has changed. They have lost abilities that were once central to defining them. But, they live more comfortable lives that allow them to travel, adapt, and learn new skills. The most important of these skills is developing new ways to break into houses. The group of people (normal cells) that still lives outdoors, meanwhile, devotes more time to survival. They must rebuild the same shelters over and over and spend many hours hunting and gathering food. Their population is less diverse, but can still survive outside of houses.

Because most definitions of life include the ability to self-replicate, there is a long-standing debate over whether or not viruses are alive. Although many textbooks still classify them as non-living, there is growing evidence that viruses share a long evolutionary history with cells and should be considered alive [1].

Regardless of whether or not they are alive, viruses are obligate intracellular parasites. They have their own genome, but can only reproduce inside a host cell. In order to create more viral particles, the virus must invade a host cell and take control of it without destroying it (at least for a while). Once the virus has installed itself in the nucleus, the command center of the host cell, it turns the cell into a virus factory, using the infected organism's own resources to create more disease-causing particles.

Depending on the type, viruses can infect animals, plants, or bacteria (these types of viruses are often called bacteriophages, or just phages).

Viral replication leads to disease symptoms, directly or indirectly. Sometimes, the daughter cells made through viral replication are stored inside the host cell until they reach a critical mass that causes the cell to burst open. This can cause damage to the infected tissue or organ. Viral activity can also stimulate the host's immune system, causing symptoms like inflammation and fever.

Whereas eukaryotic cells all use double-stranded DNA (dsDNA) as the primary method of storing their genetic information, viruses are more diverse. The genome may be a single strand or a double strand of RNA or of DNA. The type of genome determines how the virus reproduces, which can be used to classify viruses. The Baltimore Classification groups viruses by genome type. Every class of virus produces messenger-RNA (mRNA) that can direct protein synthesis and determine what the cell makes. 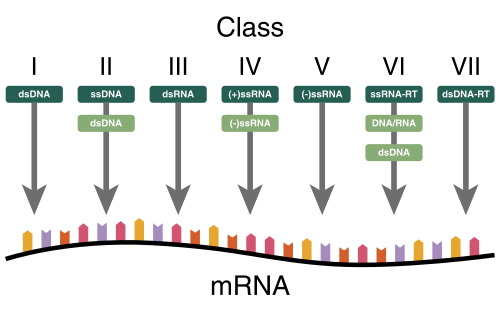 Class II single-stranded DNA. One example is parvovirus, which is highly contagious and potentially fatal among pet dogs.

Class III double-stranded RNA. Rotavirus, which causes severe diarrhea and vomiting in young children, is one dsRNA virus. Nearly all children experience at least one bout of rotavirus by the time they start school.

Class V single-stranded RNA that functions as a template for mRNA (the - or antisense strand). Influenza, measles, mumps, and rabies are all caused by viruses of this class. Additionally filoviruses like ebola are in this group.

Class VI single-stranded RNA that undergoes reverse transcription to a DNA intermediate. Human immunodeficiency virus (HIV) is the most well-known of this class.

Class VII double-stranded DNA that undergoes reverse transcription. Hepatitis B is one example. 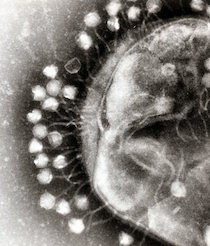 Viruses are small and lightweight compared to plant or animal cells. At a minimum, they contain nucleic acid (DNA or RNA) wrapped in a protein shell called a capsid.

The shapes of viruses vary in their complexity from a simple sphere or rod to complex polyhedrals. The most complex shapes are found in phages, which have icosahedral heads and a multi-part tail.

Some viruses can infect only one species of plant, animal, or bacteria. Others are more generalized. Influenza, for example, can spread from livestock to humans. The limitation on host cells available to a virus is known as its host range. The host range is determined by a "lock-and-key" recognition system between proteins on the outside of the virus and receptors on the host cell. This attachment process involves viral capsids bonding to receptors on the host cell. It is a evolved trait of particularly successful viruses to attach only to those cells that will allow them to replicate.

The virus then uses the raw materials and infrastructure of the cell (such as enzymes, amino acids, and organelles) to manufacture capsid proteins and replicate the viral genome. These parts then self-assemble into new virus particles, which can exit the cell and infect more healthy host cells. 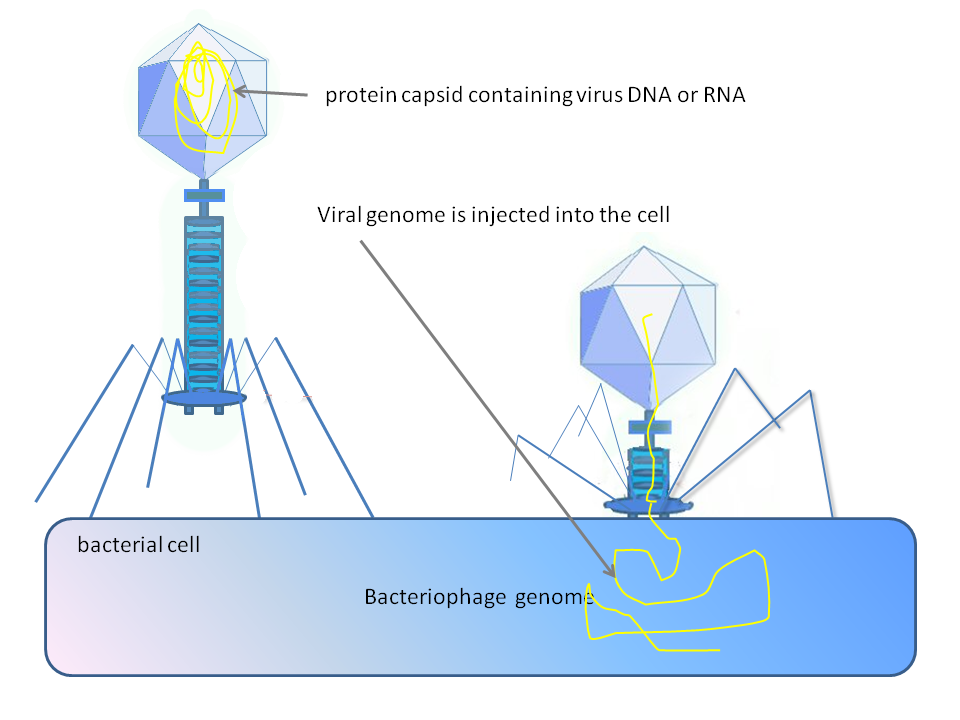 Phage injecting its genome into a bacterial cell. Not to scale. [4]

Phages with dsDNA have two different strategies of reproducing. All phages use the lytic cycle, which ends with the death of the host cell as it is split open to release the new phages. Phages that only replicate in this manner are called virulent phages. By contrast, temperate phages use both the lytic cycle and the lysogenic cycle to reproduce.

In the lysogenic cycle, the phage DNA integrates into the host cell's DNA undetected. The host cell is then classified as a prophage. When the prophage undergoes normal cell division, the viral DNA is replicated along with the bacterial DNA, creating two functional bacterial cells that are both prophages. These cells can continue to divide, rapidly creating a large number of prophages. Eventually, something triggers the viral material within the prophage to switch from lysogenic mode to lytic mode, and the host cell is destroyed.

As small as viruses are, infectious agents can go even smaller. Viroids dicovered by T.O Diener are circular RNA molecules that have a low molecular weight and can infect plants. Rather than overtaking the nucleus of the cell and coding for proteins, the viroid just reproduces itself with existing enzymes. Eventually, the viroid load alters cellular regulation and affects the plant's growth.

Prions are even smaller. They are the misfolded proteins associated with neurodegenerative diseases like mad cow disease or Bovine spongiform encephalopathy and Creutzfeldt-Jakob syndrome. These infectious, nearly-indestructible proteins cannot self-replicate, but they can induce normal proteins in the brain to misfold into the same abnormal shape. The prions then aggregate into a chain that eventually disrupts brain function.

[2] Image from https://commons.wikimedia.org/wiki/File:VirusBaltimoreClassification.svg under Creative Commons licensing for reuse and modification.

[3] Image from https://commons.wikimedia.org/wiki/File:Phage.jpg under Creative Commons licensing for reuse and modification.

[4] Image from https://commons.wikimedia.org/wiki/File:Phageinjectingitsgenomeintobacterialcell.png under Creative Commons licensing for reuse and modification.