Plasma globe powering a light bulb at a distance.

The job of a physicist is to find simple rules that predict the things that happen in the world around us. From the size of avalanches and forest fires, to the shape of red blood cells, to the flow of traffic in cities, all of these things can be explained by simple rules and principles that govern the dynamics of nature. Once we can explain the world around us, we can attempt to change it by turning these principles around and using them to design things like electric cars, or rockets, or hydroelectric dams. In this gentle introduction to mechanics, you'll be exposed to some interesting phenomena in the world around us, and asked to explain how or why they happen. Although these are elementary examples, they encapsulate the essential experience of doing real physics research.

Here are some tips to get started:

When you walk across a carpet in a cold, dry winter, or when you touch a doorknob or another person, you sometimes experience an electric shock. Why does this happen? 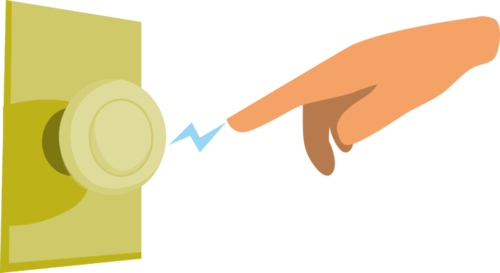 Whenever two materials come into contact, there is the possibility of electrons transferring from one material to the other. This can lead to a large imbalance of charge between two objects. What determines which material ends up stealing electrons from the other is determined by the electronegativity of the molecules in each material.

For atoms, a simple picture is that atoms whose outer electron orbitals are close to the nucleus will enable more attraction between the positive nucleus and available electrons, while a large atom whose outer orbitals are far from the nucleus will experience less of an attraction. Thinking about electronegativity from first principles becomes more complicated once atoms are bound in molecules, but the idea is the same.

Empirically, we can arrange materials in order of most to least electronegative. If we have a carpet made of wool, and walk around wearing rubber soled shoes, we'll tend to accumulate negative charge from the carpet, since rubber is more electronegative than wool. Conversely, if we walk around with bare feet, we will donate electrons to the carpet as we become positively charged.

As long as we're moving around, sliding our shoes or feet against the carpet, charges will transfer until the electronegativity of the carpet is equal to the electronegativity of the material on our feet, at which point charge transfer will stop. Of course, we are always losing charge to molecules in the air, but in dry weather, the main mechanism for transporting charge away, the water in humid air, is not available. In such circumstances we can maintain a very large charge which we'll keep until we come into contact with a neutral object of differing electronegativity.

One of the best features of physics is the universality of the principles. Mechanisms identified in the dynamics of quantum fields can very well be applied to problems in materials science. Nonetheless, we can broadly classify the kinds of things we'll study in mechanics.