Economics is the study of how society manages scare resources. It is a wide branch of the social sciences that studies how the billions of people, companies, and organizations throughout the world make decisions; it studies "the economy." The economy is partially driven by scarcity of resources, limitations in how much there are of certain goods and who can have those goods.

Generally, economics is divided between microeconomics and macroeconomics, with "micro," as it's colloquially called, focusing on the decision making of individual agents (people, families, firms, etc.) given their limited resources. "Macro" looks broadly at economies as a whole (the economy of a country, an industry, countries that trade, etc.). Both are affected by government actions and can be represented through graphs of supply and demand.

The study of economics governs everything bought and sold, the money supply, trade and movement between countries, sometimes even war, religion, and global politics. It's a big topic, with this wiki touching on a few core concepts.

Goods and services are the items that are bought and sold in an economy. Typically goods are thought of as tangible products--food, clothing, cell phones, etc. Services are activities performed for a person--for instance, a doctor performing surgery, a barber cutting hair, an accountant doing taxes, etc.

Markets are groups of buyers and sellers for particular goods and services. This could be a physical marketplace, for instance, for fruits and vegetables. A digital one, like eBay or Amazon. A financial one, like stock markets. Or any other place where someone buys something and another person sells it.

Efficiency means to get the most one can from scarce resources. It is about reducing waste and maximizing value. 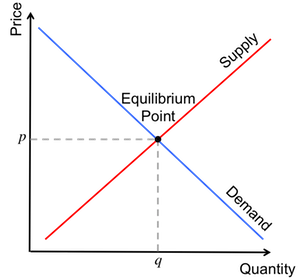 A basic graph of supply and demand for some good, with the equilibrium point being the place where the price p that consumers are willing to pay matches the quantity of that good, q, suppliers are willing to distribute at that price.

Supply and demand are two primary forces in markets. Supply and demand graphs help show why prices rise quickly for apartments in markets where there is a lot of demand (but little supply!), like San Francisco; or how prices for a good like oil can fall when refiners discover new oil deposits, increase production, or release millions of barrels of crude oil they held in reserve. But supply and demand graphs are not only limited to prices; they can represent decreases in wages when there is high unemployment, why some restaurants are booked out months in advance, or how interest rates affect the supply of money.

Equilibrium
The equilibrium is the point where supply and demand for a product meet. It is the point where consumer demand for a good at various prices meets the price suppliers are willing to accept to produce the desired quantity of that good. Equilibrium means balance, and when markets become unbalanced (for instance consumers demand more of a good than is currently being supplied), then markets tend to shift back to equilibrium (either suppliers raise prices, increase production, or both--generally both--to meet the increase in demand).

Elasticity
Elasticity is a measure of responsiveness--specifically how responsive quantity supplied or quantity demanded is to a change. This could be a change in price, with suppliers raising their prices, in which case a measure of consumer's reaction would be referred to as their price elasticity. Demand or supply are said to be price elastic if they respond substantially to changes in price, and price inelastic if they respond only slightly.

Taxes
A tax is another form of government policy, wherein governments (local, state, and federal) take a percentage of some transaction. If the government taxes income someone receives for services performed--like doing their job--this is known as an income tax. Governments can also tax the sale of certain goods (a sales tax), gifts given or received (estate and gift taxes), the purchase of property (property taxes), and others. The main concern of the economists is how taxes affect markets. Sometimes taxes are applied to deliberately decrease consumption, and these are colloquially called "sin taxes" and can be applied to goods like tobacco and alcohol.

Opportunity Cost
Opportunity cost refers to what must be given up in order to obtain something. For instance, it takes time to read this, time that could be spent exercising or studying another subject. That cost may be justified; studying the core concepts of economics may be more important than five minutes of exercise, but it is still a cost. Opportunity costs can be significant factors in a competitive market. Some manufacturers have lower opportunity costs to take risks or produce extra goods, therefore gaining rewards at lower costs than other manufacturers and giving them an advantage.

Externalities are a cost or a benefit that occurs to a bystander. For instance, a factory may pollute the air in its town. The company running the factory may not have to pay for the costs of this pollution, nor may the customers that buy the factory's products. However, the people who live in that town are bystanders that pay for the cost of the pollution. Externalities can be positive or negative, and occur on the supply side or the demand side. As an example, some forms of construction produce positive externalities. Building a new luxury high-rise condominium in a neighborhood can bring in more customers (the new residents) to local businesses (a positive supply-side externality) and might raise property values (a positive demand-side externality).

Utility is a measure of satisfaction. For instance, it measures how much happier a consumer is to own one product over another. A consumer that prefers chocolate to vanilla will be said to gain more utility, more happiness, from eating chocolate ice cream than they would receive from eating vanilla. Marginal utility is therefore about increments of utility gained with one more good or service. For instance, for a consumer who just had a bowl of chocolate ice cream, a second bowl of chocolate ice cream is less valuable, a third is less valuable, a fourth less still. At a certain point the person will tire of eating chocolate ice cream. This is known as diminishing marginal utility, the concept that each additional unit of some good or service is worth less than the previous unit. It also applies, at least general level, to wealth. One thousand dollars is worth more to someone with no money than it is to a billionaire.

Competition, Monopolies, Oligopolies
Free market economy (or just free market) is the term for an economy where prices are determined by demand from consumers, supply and demand are allowed to reign freely, and governments do not interfere. This is said to be the case of perfect competition. With two notes. One, there is some disagreement about how much a government could or should protect the free market. Most economists see the need for government protections--like police offices in the physical market to prevent theft--but other forms of protection are more controversial. For instance, product safety standards to prevent harm to consumers sometimes impose burdens on the manufacturers that they contend not all consumers want. Secondly, this assumes that no supplier or manufacturer has a monopoly. A monopoly is where one supplier controls all or most of a good or service, allowing them to artificially control the price of good or service. For instance, in the 90's the De Beers company controlled what was estimated as 90% of the diamond supply. At the time, they stockpiled diamonds and artificially raised the price, which they could get away with because no one or few others could compete with them. If someone wanted a diamond, they had to buy through De Beers. Many concede that the diamond market is no longer a monopoly, but argue that it is now an oligopoly, a market in which there is still limited competition.

Poverty
Poverty is a state of scarcity. It means to lack material possessions or wealth and implies destitution or so little wealth and material possessions that one cannot live--one does not have the means to buy the food, clothes, and shelter one needs to survive. Poverty is a function of income inequality and is a controversial topic, with most economists contending that the free market is the best system for reducing poverty (certainly the empirical evidence agrees with this), but acknowledging that poverty is still present and that an unchecked free market would still allow for poverty. Poverty is also a moral and political issue, with countries tending to see more poverty in marginalized demographic groups, and many world religions contending that it is one's duty to aid those who are impoverished.

The gross domestic product is the value of all goods or services produced by a country. For instance, the World Bank estimates India's GDP is at 2.095 Trillion $USD for the year 2015.[1] That means that, in 2015, India produced and sold over $2 Trillion of agricultural goods, textiles, technological inventions, accounting services, dance lessons, and many many other goods and services. GDP is a measure of a country's economic health and is generally calculated by summing what everyone earned (income approach) or by summing what everyone spent (expenditure approach) although neither is expected to be exactly right (to the dollar).

Inflation
Inflation is the decrease in what a currency can buy. It reflects changes in prices not correlated with supply and demand but with each unit of a currency being worth less. For instance, if USD has a 2% rate of inflation from one year to the next, then a buyer would need $102 one year to buy the same amount of goods that $100 could buy in the previous year (assuming no change in supply or demand). Inflation can have positive and negative effects on an economy. It can increase the opportunity costs of saving money, and run-away inflation can cause prices to increase rapidly each day or week--leading to hoarding of goods and services. However, debts are usually fixed amounts (with some interest), and increasing inflation reduces the burden of that debt. Governments and central banks use interest rates and other monetary policies to control inflation. Some economist also adjusts historical measures, like GDP, for inflation--known as the "real price" as opposed to the "nominal price." 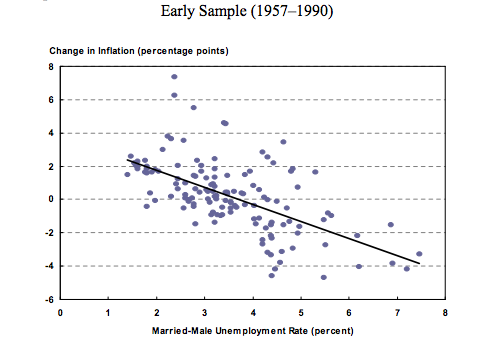 Employment is another key focus of macroeconomists; generally the unemployment rate is the main focus. An economy where everyone who wants to work is working is known as full employment, but most economists believe this is impossible and undesirable. One reason for this is explained by the type of unemployment (frictional, cyclical, structural), where lack of information, seasons, and lack of skills cause temporary unemployment. The Phillips curve offers another explanation, tying the rate of inflation to the rate of unemployment, and showing that full employment would require an economically undesirable level of inflation. When unemployment is too high, economies stagnate and can spiral and their workers aren't earning income to buy goods and services, so companies make less money and have to lay off more workers.

Game theory is the mathematical analysis of decision making. In game theory, the interaction between two or more players is often framed in terms of a game with a particular set of rules. Of interest may be the strategies that give optimal outcomes for each of the players or, conversely, the resulting outcomes when certain strategies are played. The prisoner's dilemma is one of the more famous "games" that economists have tested.