A Fibonacci heap is a specific implementation of the heap data structure that makes use of Fibonacci numbers. Fibonacci heaps are used to implement the priority queue element in Dijkstra’s algorithm, giving the algorithm a very efficient running time. 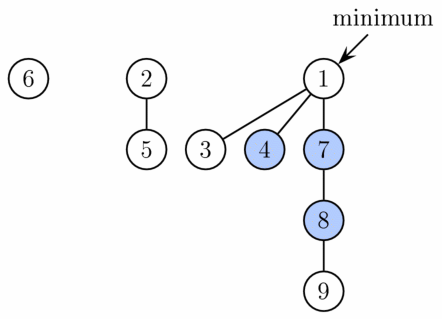 As the name suggests, Fibonacci heaps use Fibonacci numbers in its structure.

Like binomial heaps, Fibonacci heaps use doubly linked lists to allow for O(1) time for operations such as splicing off a part of a list, merging two lists, and finding the minimum (or maximum) value. Each node contains a pointer to its parent and any one of its children. The children are all linked together in a doubly linked list called the child list. Each child in the child list has pointers for its left sibling and its right sibling.

For each node, the linked list also maintains the number of children a node has, a pointer to the root containing the minimum key, and whether the node is marked. A node is marked to indicate that it has lost a single child and a node is unmarked if it loses no children. See the description of the decrease-key function in the next section for more details.

In Fibonacci heaps, the degrees of nodes (the number of children) are constrained. Each node in the heap has degree at most O(logn), and the size of a subtree rooted in a node of degree k is at least Fk​+2, where Fk​ is the kth Fibonacci number[5]. This structure is maintained by having a rule that at most one child can be cut from each non-root node. When a second child is removed, the node itself needs to be removed from its parent and becomes the root of a new tree. This means that the number of trees is decreased in the operation extract-min, where trees are linked together.

Fibonacci heaps must satisfy the min-heap property (or max-heap property if making a max-heap) where every node’s children must have a smaller value than it (the parent), and therefore, the minimum element will always be at the root of one of the trees.

Here is how Fibonacci heaps implement the basic functionalities of heaps and the time complexity of each operation. The children of each node are also related using a linked list. For each node, the linked list maintains the number of children a node has and whether the node is marked. The linked list also maintains a pointer to the root containing the minimum key. A node is marked to indicate if any of its children were removed. This is important so the heap can keep track of how far removed its shape is becoming from a binomial heap. If a Fibonacci heap is too different from a binomial heap, it loses many of the efficient time operations that their binomial nature gives it.

The linked list has pointers and keeps track of the minimum node, so finding the minimum is simple and can be done in constant time.

In Fibonacci heaps, merging is accomplished by simply concatenating two lists containing the tree roots. Compare the roots of the two heaps to be merged, and whichever is smaller becomes the root of the new combined heap. The other tree is added as a subtree to this root. This can be done in constant time.

Explain why Fibonacci heaps allow for constant time merging. What does this mean for the insert operation?

Concatenating the two lists can be done in constant time. Doing operations to a linked list is constant time since it is just a matter of updating pointers. Comparing the roots of two heaps is also constant time.

Sinceinsert is just taking the node to be inserted and treating it like a heap to be merged with the heap we are inserting the node into, we just call merge on the two. This means that insert is also constant time.

extract-min is one of the most important operations regarding Fibonacci heaps. Much of a Fibonacci heap’s speed advantage comes from the fact that it delays consolidating heaps after operations until extract-min is called. Binomial heaps, on the other hand, consolidate immediately. Consolidation occurs when heap properties are violated, for example, if two heaps have the same order, the heaps must be adjusted to prevent this.

The two images below show the extract-min function on the Fibonacci heap shown in the introduction. 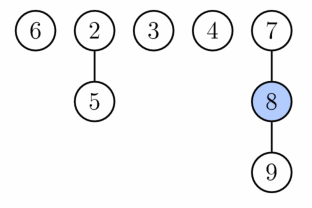 Fibonacci heap after the first phase of extract minimum. Node with key 1 (the minimum) was deleted and its children were added as separate trees.[6] 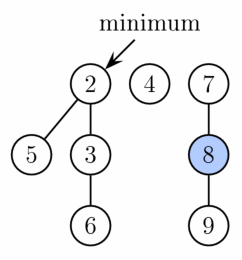 Fibonacci after extract minimum is completed. First, nodes 3 and 6 are linked together. Then the result is linked with tree rooted at node 2. Finally, the new minimum is found.[7]

Insertion to a Fibonacci heap is similar to the insert operation of a binomial heap. A heap of one element is created and the two heaps are merged with the merge function. The minimum element pointer is updated if necessary. The total number of nodes in the tree increases by one.

There are two situations that can arise when decreasing the key: the change will cause a heap violation or it will not.

Fibonacci heap from the introduction after decreasing key of node 9 to 0. This node, as well as its two marked ancestors, are cut from the tree rooted at 1 and placed as new roots.[8]

The decrease key function marks a node when its child is removed. This allows it to track some history about each node. Essentially the marking tracks if[9]:

Here is a pseudocode implementation of Fibonacci heaps[10] [11].

According to a paper[12] written by Michael Fredman (one of the inventors of Fibonacci heaps), Fibonacci heaps have a couple of downsides: many computer scientists claim that they are difficult to program and their theoretically excellent running times aren't always better in practice than theoretically inferior types of heaps.