A Flow network is a directed graph where each edge has a capacity and a flow. They are typically used to model problems involving the transport of items between locations, using a network of routes with limited capacity. Examples include modeling traffic on a network of roads, fluid in a network of pipes, and electricity in a network of circuit components.

For example, a company might want to ship packages from Los Angeles to New York City using trucks to transport between intermediate cities. If there is only one truck for the route connecting a pair of cities and each truck has a maximum load, then the graph describing the transportation options will be a flow network. Each node will represent a city and each edge will represent a truck route between those cities (e.g. a highway). The capacity for a particular route will be the maximum load the truck for that route can carry. Using this model, the company can decide how to split their packages between trucks so that the packages can reach their destination using the available routes and trucks. The number of packages the company decides to ship along a particular truck route is the flow for that route.

Imagine a courier service that wants to ship as many widgets as possible from city s to city t. Unfortunately, there is no way to ship widgets directly from s to t, so the courier service must ship the widgets using the intermediate cities a, b, c, and d. Particular pairs of cities are connected by flights, which allow the transport of widgets between those cities. This transportation network can be represented by the following directed graph, where nodes represent cities and directed edges represent flights between those cities. 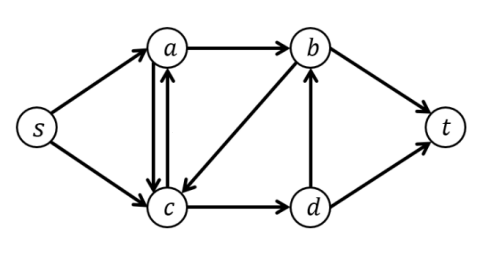 Obviously, any realistic airplane can't carry an unlimited number of widgets. Therefore, every flight has a maximum number of widgets that it can carry, dependent on the size of its cargo bay. This maximum is called the capacity for that flight. It is a number associated with each edge in the graph above and denotes the maximum number of widgets that can be transported between cities. The graph below is the graph above plus the corresponding capacities. For example, the flight from b to c can carry a maximum of 9 widgets, so edge bc has capacity 9. 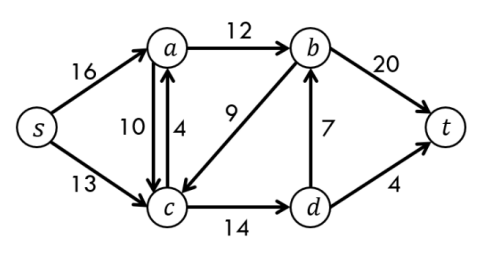 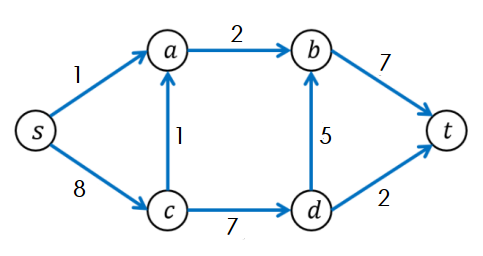 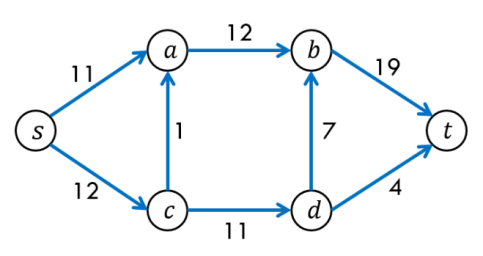 Formally, a flow network is defined as

G=(V,E) is a directed graph of vertices V and directed edges E
c:E→R0+​ is a mapping from the edges to the nonnegative reals, and c(e) is called the capacity of edge e
s,t∈V are special vertices of G called the source and sink, respectively

An admissible flow. or, for short, a flow on N, is defined as

A flow f for a flow network N is a mapping f:E→R0+​ satisfying the following two constraints:

for each vertex v​=s,t, where e− and e+ denote the start and end vertex of edge e, respectively

The first constraint (called the feasibility condition) simply says that the flow f(e) along each edge e must be nonnegative and may not exceed the capacity c(e) for that edge. The second constraint (called the flow conservation condition) says that the flows into a vertex must equal the flows out of that vertex, except for the source and sink vertices.

Given vertices s,a,b,t with source s and sink t, draw the flow network with the following capacities, making sure to label each edge with its corresponding capacity.

One possible layout of the flow network is shown to the left. Note that, since edges are directed in a flow network, edge ba is not included in the graph even though edge ab is included. Also, since s is a source, it has no edges entering it. Similarly, sink t has no edges leaving it.

Given the flow network from the previous example, is the mapping (with each edge label equal to that edge's flow) below an admissible flow?

No, the mapping is not an admissible flow. While the mapping satisfies the feasibility condition (check that the flow for each edge is between zero and the capacity for that edge), the flow conservation condition is not satisfied. Specifically, the total flow exiting node b is 1, while the total flow entering node b is 1.5. Changing the flow of edge sb from .75 to .25 will make this an admissible flow.

While many different problems can be formulated as flow networks, a few concepts are common to almost all of them. Some are used to transform a given problem statement into the canonical form N=(G,s,t,c) as defined in the previous section, while others are used as intermediate calculations in algorithmic solutions.

The residual capacity r of a flow network N and a flow f is the difference between the capacity c and the flow f. Formally, this is defined as

The residual capacity for a flow network N and flow f is a mapping r:E→R0+​ such that

Setting each edge's weight to its residual capacity forms a residual network for a flow network N and flow f. This network models the available capacity for all edges, and is used as an intermediate calculation in the Ford-Fulkerson algorithm for solving the maximum flow problem.

An augmenting path is a directed path in the residual network with unused capacity for every edge in that path. Formally, this is defined as

An augmenting path for a flow network N and flow f is a directed path p starting at the source s and ending at the sink t such that the residual capacity r for all edges on that path is nonzero. Specifically,

Actually, it turns out that a flow network N with flow f is a maximum flow if and only if there is no augmenting path in the residual network. The 'if' part of this theorem, that a maximum flow has no augmenting paths, is clear since the existence of such a path implies the existence of a more maximal flow (by increasing the flow for all edges in the path by the minimum residual capacity along that path). The 'only if' part of this theorem, that no augmenting paths implies maximality, is less intuitive, and is the key insight behind the Ford-Fulkerson algorithm. 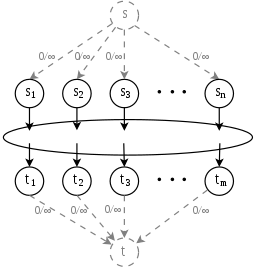 Flow network with multiple source and sinks. A supersource S and supersink T have been added.[2]

Since the addition of supernodes shouldn't influence any calculations on the graph, the capacity c for the newly created edges is set to infinity, so that the flow along those edges is only constrained to be nonnegative. For example, the figure to the right is a flow network with n sources s1​,…,sn​ and m sinks t1​,…,tm​, with supersource S and supersink T.

There are several different problems that can be modeled as flow networks. A few in particular are common and show up in very diverse fields. Since flow network problems have been well studied, each is only briefly described here, along with some example applications. More in depth discussions are linked to in each problem description.

Maximum flow algorithms have an enormous range of applications. Examples include airline flight crew scheduling, the circulation-demand problem (where goods with location dependent demand must be transported using routes with limited capacity), and determining when during a sports season to eliminate losing teams.

Minimum cost flow is the problem of finding the cheapest possible way to send a certain amount of flow through a network. This requires extending the flow network so that each edge e=(u,v) now also has an associated cost a(e) per unit of flow per edge. The total cost of a flow is then sum(​e∈E)a(e) \cdot f(e)). Minimum cost flow can be solved using linear programming since the objective function is linear, as are the constraints.

One common application of minimum cost flow is in determining the cheapest way to transport items from point A to point B, given some routes with limited capacity and associated cost. For example, truck routes may have greater capacity, but higher cost (in terms of time), while plane routes may have lesser capacity, but lower cost. Thus, a company looking to minimize the cost of transport would seek to model this trade-off between capacity and cost using minimum cost flow.

Maximal bipartite matching is the problem of determining the maximal matching for a bipartite graph. If the graph is modeled as a flow network (flow from one set of nodes to the other), various flow algorithms can be used to solve it. For example, the Ford-Fulkerson algorithm can solve bipartite matching in unweighted graphs, as can the Hopcroft–Karp algorithm, which does so more efficiently since it is designed specially for bipartite graphs. For the weighted graph case (called the assignment problem), the best known algorithm is the Hungarian algorithm.

The transportation problem, like its name suggests, is sometimes described in terms of mines and factories. If mines supply factories with ore, then the transportation problem reduces to determining the most cost effective way to transport ore from individual mines to individual factories. Thus, ore from one mine may be sent to multiple factories, while one factory may use the ore from many mines. In this case, the cost function is dependent on the Euclidean distance between each mine and factory, as well as the cost of available transportation methods between the two. Obviously, mining isn't the only industry whose transportation concerns can be formulated in this fashion, so the problem itself is very general, as are its applications.