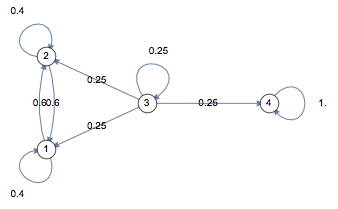 A Markov chain is a mathematical system that experiences transitions from one state to another according to certain probabilistic rules. The defining characteristic of a Markov chain is that no matter how the process arrived at its present state, the possible future states are fixed. In other words, the probability of transitioning to any particular state is dependent solely on the current state and time elapsed. The state space, or set of all possible states, can be anything: letters, numbers, weather conditions, baseball scores, or stock performances.

Markov chains may be modeled by finite state machines, and random walks provide a prolific example of their usefulness in mathematics. They arise broadly in statistical and information-theoretical contexts and are widely employed in economics, game theory, queueing (communication) theory, genetics, and finance. While it is possible to discuss Markov chains with any size of state space, the initial theory and most applications are focused on cases with a finite (or countably infinite) number of states.

A variant of the same question asks once again for ball color, but it allows replacement each time a ball is drawn. Once again, this creates a stochastic process with color for the random variable. This process, however, does satisfy the Markov property. Can you figure out why?

In probability theory, the most immediate example is that of a time-homogeneous Markov chain, in which the probability of any state transition is independent of time. Such a process may be visualized with a labeled directed graph, for which the sum of the labels of any vertex's outgoing edges is 1.

A (time-homogeneous) Markov chain built on states A and B is depicted in the diagram below. What is the probability that a process beginning on A will be on B after 2 moves?

For any positive integer n and possible states i0​,i1​,…,in​ of the random variables,

In other words, knowledge of the previous state is all that is necessary to determine the probability distribution of the current state. This definition is broader than the one explored above, as it allows for non-stationary transition probabilities and therefore time-inhomogeneous Markov chains; that is, as time goes on (steps increase), the probability of moving from one state to another may change.

A transition matrix Pt​ for Markov chain {X} at time t is a matrix containing information on the probability of transitioning between states. In particular, given an ordering of a matrix's rows and columns by the state space S, the (i,j)th element of the matrix Pt​ is given by

This means each row of the matrix is a probability vector, and the sum of its entries is 1.

For the time-independent Markov chain described by the picture below, what is its 2-step transition matrix?

Note the transition matrix is

It follows that the 2-step transition matrix is

A Markov chain has first state A and second state B, and its transition probabilities for all time are given by the following graph:

What is its transition matrix?

Note: The transition matrix is oriented such that the kth row represents the set of probabilities of transitioning from state k to another state. 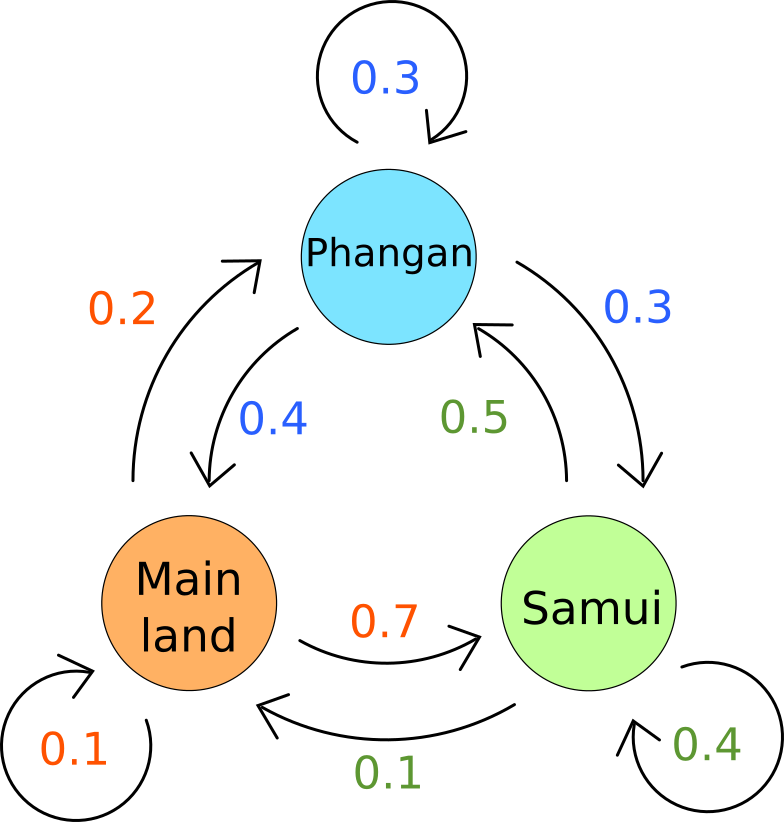 Once people arrive in Thailand, they want to enjoy the sun and beaches on 2 popular islands in the south: Samui Island & Phangan Island.

From survey data, when on the mainland, 70% of tourists plan to go to Samui Island, 20% to Phangan Island, and only 10% remain on shore the next day.

When on Samui Island, 40% continue to stay on Samui, 50% plan to go to Phangan Island, and only 10% return to mainland the next day.

Finally, when on Phangan Island, 30% prolong their stay here, 30% divert to Samui Island, and 40% go back to mainland the next day.

Starting from the mainland, what is the probability (in percentage) that the travelers will be on the mainland at the end of a 3-day trip?

A variety of descriptions of either a specific state in a Markov chain or the entire Markov chain allow for better understanding of the Markov chain's behavior. Let P be the transition matrix of Markov chain {X0​,X1​,…}.

Irreducibility and periodicity both concern the locations a Markov chain could be at some later point in time, given where it started. Stationary distributions deal with the likelihood of a process being in a certain state at an unknown point of time. For Markov chains with a finite number of states, each of which is positive recurrent, an aperiodic Markov chain is the same as an irreducible Markov chain.

The graphs of two time-homogeneous Markov chains are shown below. 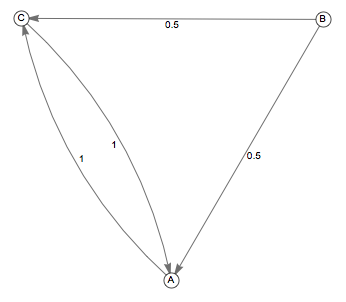 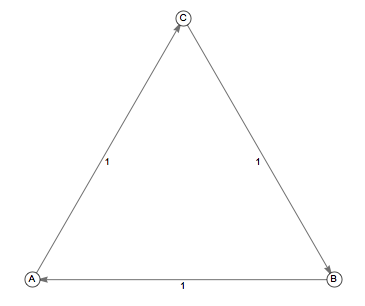 Determine facts about their periodicity and reducibility.