Triangles are polygons (shapes) with three sides and three angles, which can be formed by connecting any three points in a plane. They are one of the first shapes studied in geometry.

Triangles are particularly important because arbitrary polygons (with 4, 5, 6, or n sides) can be decomposed into triangles. Thus, understanding the basic properties of triangles allows for deeper study of these larger polygons as well. Interestingly, the triangle is the only rigid polygon formed out of straight line segments, meaning that if the three lengths of the sides are given, the measurements correspond to a unique triangle. Because of this, it is often possible, given some information about a triangle (e.g. some side lengths and some angles), to determine additional facts about the triangle.

If ABC is a triangle, then ∠ABC+∠BCA+∠CAB=180∘. In other words, the sum of the 3 internal angles in any triangle is 180∘.

Draw line DE that is parallel to AB and passes through C as in the above figure.
Since DE∥AB, applying the principle of alternate interior angles shows that ∠DCA=∠CAB and ∠BCE=∠CBA.
Since angles in a line sum up to 180 degrees, ∠DCA+∠ACB+∠BCE=180∘.
Thus, we conclude that ∠CAB+∠ACB+∠CBA=∠DCA+∠ACB+∠BCE=180∘. □​

Triangles have the property that the sum of any two sides of the triangle is always strictly greater than the third side. This property, known as the triangle inequality, is explored in the wiki linked above.

Triangles can be classified into different categories based on their sides and angles. For example, a triangle with one angle of measure 90∘ is known as a right triangle, while a triangle with sides of all equal length is known as an equilateral triangle. These classifications and many others are explored in the wiki linked above.

Main article: Area of a Triangle

When determining the area of a triangle, note that a triangle can be thought of as half of a parallelogram. The following picture should make this point clear:

Because the area of a parallelogram is equal to the product of its base and height, the area of a triangle is simply half of that area.

The area of a triangle is A=2bh​, where b is the length of the base and h is the height.

What is the area of a triangle with base 10 and height 6? 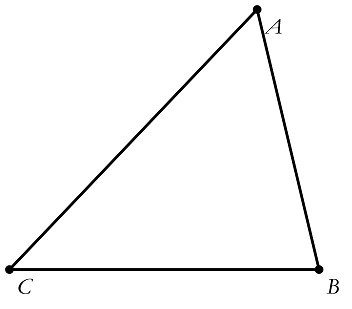 Nihar mistakenly multiplies base AB by the height from A (instead of C). He gets a value of 14.

Andrew mistakenly multiplies base BC by the height from C (instead of A). He gets a value of 56.

For more advanced methods of finding the area of a triangle, such as Heron's formula, see the wiki linked at the top of this section.

For regular polygons, the formula to find the exterior angle of a polygon is n360∘​, where n is the number of sides.

From the property of triangles-angle sum, the sum of measures of all angles in a triangle is 180∘. So, in △ABC, it follows that ∠ABC+∠BCA+∠CAB=180∘.

Since ∠BCA and ∠DCA form a straight line, ∠BCA+∠DCA=180∘, It follows that both sets of angles are equal to 180∘:

Triangle ABC has the property that ∠A+∠B=∠C. Find the measure of ∠C in degrees.

Mary drew a triangle on the board. What is the sum of all interior angles in a triangle?

Interested in learning more about triangles? Check out these pages: