A Nice Problem Trivialized By a Single Lemma!

(CGMO 2012) The incircle of a triangle ABC is tangent to sides AB and AC at D and E respectively, and O is the circumcenter of triangle BCI where \(I\) denotes the incenter of \(\bigtriangleup ABC\). Prove that \(\angle ODB = \angle OEC \)

We will first prove this lemma.

Lemma Let ABC be a triangle with incenter I , A-excenter Ia​, and denote the midpoint of arc BC to be L, then points B,I,C,Ia​ are concyclic with L as the circle center. 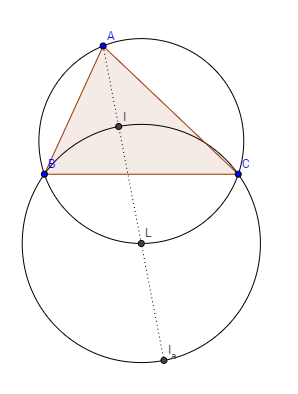 Proof: First notice that L is the intersection of the angle bisector of A and perpendicular bisector of BC.

First we prove that LB=LI=LC.

Because BI,AI are angle bisectors, we know that ∠IAB=2α​ and ∠ABI=∠IBC=2β​. By Exterior Angle Theorem, we know that ∠BIL=2α+β​. If we prove that ∠IBL=2α+β​ we have proved the segments are equal.

Notice that ∠CBL=∠LAC=2α​ because they substend the same arc. Therefore this implies that ∠IBL=∠IBC+∠CBL=2α+β​=∠BIL. Thus, by isosceles triangles we get that LB=LI=LC. This tells us that B,I,C are concyclic with L as a center.

Now, we must prove that Ia​ also lies on this circle.

Denote M as a point on ray AB past B.

By Exterior Angle Theorem, we have that ∠MBC=α+γ. 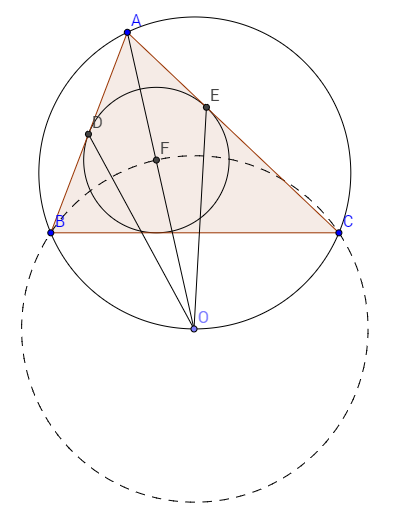 Restatement: The incircle of a triangle ABC is tangent to sides AB and AC at D and E respectively, and O is the circumcenter of triangle BCF where F denotes the incenter of △ABC. Prove that ∠ODB=∠OEC

By the lemma, we know that the circumcenter, O, of △BFC is actually the midpoint of arc BC of the circumcircle of △ABC.

Since O is on the angle bisector, we know that ∠DAO=∠OAE. We also know that AD=AE because they are both tangents to the incircle. Additionally, △DAO and △AOE share side AO. Therefore, by SAS, we have that △ADO≅△AEO.

This implies that ∠ADO=∠AEO⟹∠ODB=∠OEC and we are done.

First, let's clarify that point I and point F are the one and the same, which is the incenter of triangle ABC. It seems to me that it's immediately obvious that the quadrilateral AEOD is a kite, so that angles ∠ODA = ∠OEA, and therefore angles ∠ODB = ∠OEC? Am I missing something here?

It is true that AEOD is a kite, but can you prove it?

If, given two points on a circle, the tangents through are drawn so that they intersect at a 3rd point, the distances from the 3rd point to the first two points are the same. Any point on the line that passes through this 3rd point and the center of the circle forms the 4th point of the kite, by reason of symmetry.

@Michael Mendrin – Yes...that works. But note both arguments rely on the fact that O lies on the angle bisector of A, and that was the main concept I was trying to convey.

@Alan Yan – I think by using the Lemma you've discussed, a harder geometry problem probably can be devised. Let me think on it for a while on how that can be done.