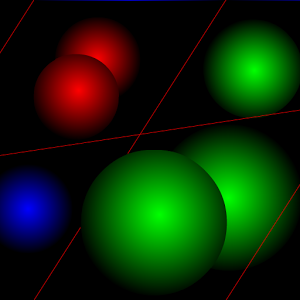 Chain Reaction is a Combinatorial Game that deserves to receive more mathematical attention than it does.

Here is my AI for Chain Reaction:https://github.com/Agnishom/ChainReactionAI/

The installation instructions for a regular linux platform is available on the README.md.

You are invited to try it out, and yes, Fork me on GitHub!

If you are interested in how this works, read on.

I will be describing the rules of the two-player (Red and Green) game but this can be generalized to any number of players.

Here is a video showing the rules in action. And, here is the implementation of the move making algorithm.

The most interesting thing is how unpredictable the game seems to be in the end, at least when you play it with your human friends. The obvious heuristic that tells us you're better off at the moment by having as many orbs as possible turns out to be very wrong. While it so seems to everyone, that say, red will win, blue suddenly takes over.

In this section, we develop a way to evaluate the value of a board using heuristics that expert players have gathered through their experience. Like any other complex combinatorial games, the heuristic value is not guaranteed to be an indicative of a dominant strategy but usually it turns out to be so.

We shall call a cell critical if the number of orbs in the cell is equal to one less than its critical mass.

The heuristic is implemented here

The minimax algorithm is an algorithm which evaluates the value of a position in a combinatorial game by looking down the game tree based on the principle that the enemy aims to minimize the player's score while the player aims to maximize it.

In theory, a minimax algorithm should be able to solve any combinatorial game optimally. However, this can only be done for small games like Tic-Tac-Toe. For larger games, the search space blows up exponentially.

For the 9×6 instance of chain reaction, I could only afford looking at the best five positions for three plies within a reasonable time. As far as I understand, this is only slightly better than a human who is able to calculate only one or two plies in the same time.

You can check out my search algorithm here