In this note, I describe a statistical problem concerning the degree of polymerization of polymers formed through free radical polymerization, a possible model of the reaction mechanism, a simulation and why it fails.

How does the distribution of the degree of polymerization (number of monomer units) of polyethene vary with the initial concentration of ethenes and the free radicals?

This is benzoyl peroxide.

When heated, it breaks up into two benzoyl free radicals. 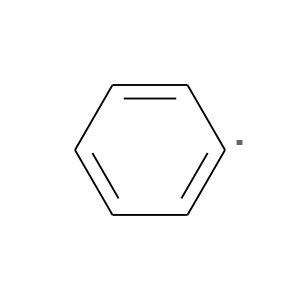 The phenyl radical attacks an ethene, and forms a phenylethyl radical.

The free radicals keep attacking the ethenes and keeps growing.

The chain reaction terminates when the free radicals die out.

For the purpose of the spherical cow model, we will assume that it is also possible that two phenyl radicals join to form biphenyl. 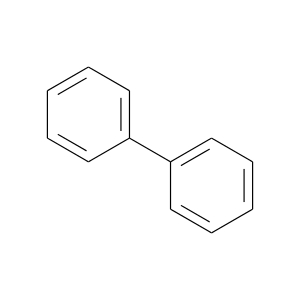 It is evident that the reaction stops when there are no more free radicals.

The spherical cow model is a simulation friendly model that tries to mimic the process of radical polymerization.

Parameters: The number of free radicals (n1​)) and the number of ethylene molecules (n2​) in the system.

The model only distinguishes between three kinds of species:

The process of polymerization is modelled here as a process with discrete time steps during each of which two objects, chosen with uniform probability from the system, interact.

The interaction rules are as follows:

So far, the Monte Carlo Simulation (Code) was not very helpful because of the large number of steps involved in the actual reaction.

Correct me if I'm wrong. Is the purpose of this code to calculate the number of types of phenyl - n chain - phenyl compounds that one can get from a given quantity of benzoyl peroxide?

If so, can one try a more "kinetic" approach using rate laws to solve the question?

I think a continuous kinetic approach will work much better than my discretized approach. However, because my knowledge of chemistry is limited, I couldn't try that.

I tried the case where biphenyls are the only product that can be formed. I think the rate of reaction for a 3 step biphenyl formation reaction is, r = k[benzoyl peroxide] (where the square brackets indicate concentration).

This was under the assumption that the unstable phenyl radical doesn't react with carbon dioxide.

I tried the case where (1,4- bi phenyl butane), (1,2-bi phenyl ethane), and biphenyl are the final compounds that are obtained.

I believe for the above case (1,4-biphenyl butane case) the rate law is,

This equation is for the rate at which biphenyl is formed in the second case. This was done just to see how the rate law will change as the chain terminates at different chain lengths.

When k[ethene] nears zero (the entire reaction resembles the 3 step reaction for the biphenyl), the rate law will accordingly change to match the first scenario's rate law.

@Vitthal Yellambalse – I think I am misconveying the question I want to ask. What I am interested in here is an idea of the length of the chains formed based on the initial concentrations of the materials.

@Agnishom Chattopadhyay – My idea was to use kinetics to determine the rate at which each chain is formed. So under certain conditions your program can eliminate the possibility of a certain product.

Lets say you use your program for the second case, when the concentration of ethene is very low (near zero). The rate at which biphenyl is produced is very large compared to the rates at which the other products are formed. Biphenyl will be the major product and its "chain_length" is 0.

In the same case, when the concentration of ethene is very very large compared to the concentration of benzoyl peroxide. The at which biphenyl is produced is almost negligible compared to rate at which the other two products. If one can determine their rate laws, your program can hopefully eliminate another compound (this might not be so. I don't know the rate laws, for all you know both of the other products might be favored). Hence the "chain_length" is 2 or 4 or both.

My idea was if we build more rate laws for cases where larger chains are involved and we see a pattern in them, we can assume the same situation for cases like phenyl - 100 carbon - phenyl. This generalized rate law for the entire mechanism can be applied in your program.

then the rate at which biphenyl forms is:

The rate at which phenyl - 2 carbon - phenyl forms is:

The rate at which phenyl - 4 carbon - phenyl forms is:

These equations suggest that in the second sub case the chain_length will be 4.

@Vitthal Yellambalse – I see. The integration idea might be helpful here. Thank you!

@Agnishom Chattopadhyay – The integration seems like a difficult task, I tried it but I didnt get anywhere..

If you want the derivation for the rate laws, I'll email them. I didn't include them because I dont know how to add images in the comments.

@Agnishom Chattopadhyay – I created a note and have posted the pictures there. Here is the link:

couldn't figure it out, refer here

I hope this helped.

Could you modify the existing code to stop the reaction at (phenyl- 4 carbon - phenyl) and see how the results compare with the rate laws.

I found an interesting article related to this. A quicker approach