Cranial Nerves: All you need to know . 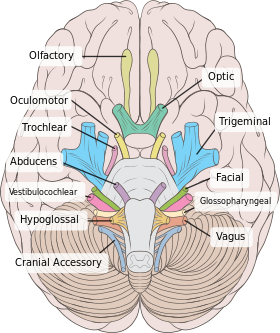 The nerves present in our Peripheral Nervous system are the cranial nerves. There are 12 pair of these nerves present, meaning that they are present on the both sides. Following are the nerves:

They are set as per order. From the above Oculomotor, Pathetic and abducens nerves are the ones that control the eye movement. And Facial and Glossopharyngeal Nerves control the Taste and Salivation(saliva formation). Also to remember the nerves try remembering the word oooptafagvah or uptafagua(for pronouncing).

Olfactory nerve: This is the first and shortest cranial nerve and the one used in the sense of smell. It is able to do regeneration. Olfactory receptor neurons continue to be born throughout life. The sense of smell arises from the stimulation of olfactory receptors by small molecules of different spatial, chemical, and electrical properties that pass over the nasal epithelium in the nasal cavity during inhalation. These interactions are made into electrical activity in the olfactory bulb, which then transmits the electrical activity to other parts of the olfactory system and the rest of the central nervous system via the olfactory tract.

Optic nerves: These are the second cranial nerve. These transmit viaual information from retina to brain. The optic nerve does not regenerate after the are cut.

Oculomotor nerves: It is the third cranial nerve. This nerve is responsible for eyeball and eyelid movement. It controls the muscles that allow for visual tracking and fixation by the eye.

Pathetic Nerves: This the fourth cranial nerve. It is the only cranial nerve that emerges dorsally from the brain, which also makes it the longest pathway. It processes brain signals to move eyes up and down and outwards. Double vision, otherwise known as diplopia, results from problems with muscle or the nerve. Complications from these issues will result in a diminished ability to walk, especially down stairs.

Trigeminal Nerves: It is the fifth one and responsible for sensation in the face , and other functions such as biting and chewing. And also it is the largest because it is a twin nerve and also there are three meaning it is thrice twinned. The motor function activates the chewing function or the mastication

Facial Nerves: It is the seventh cranial nerve, it controls the muscles of facial expression. Other functions include the taste sensations from the anterior two-thirds of the tongue and oral cavity.

Auditory/ Vestibulocochlear Nerves: The eighth cranial nerve, transmits sound and equilibrium (balance) information from the inner ear to the brain. A human's sense of equilibrium is determined by this nerve. Problems with the vestibulocochlear nerve can result in vertigo, vomiting, ringing in the ears, a false sense of motion, motion sickness, or even hearing loss.

Glossopharyngeal Nerves: The ninth cranial nerve . The glossopharyngeal nerve has many functions, including receiving various forms of sensory fibers from parts of the tongue, carotid body, the tonsils, the pharynx, and the middle ear.

Vagus Nerves: The tenth and the longest cranial nerve, the vagus forms part of the involuntary nervous system and commands unconscious body procedures, such as keeping the heart rate constant and controlling food digestion. Recent research has revealed that stimulation of the vagus decreases the frequency and severity of epileptic seizures in animals.

This topic might not be that interesting and also i have not included terminal nerve as i didn't know much about it. And if you have anything to add or any comment please write it below. Thank you. And if you have any topic in mind please give me suggestions, i am thinking of vitamins or bones.

i'd loved learning about brain and thanks for this amazibg topic.😜

sir i have a question that, if the spinal cord of the man is stronger then the man is also stronger. what is the reason behind this ?

First plz no need to call me sir and second spinal cord is a bundle of nervous tissue and support cells that extend from the brain. So basically it is just a connection. It can't be stronger or weaker , each and every human has a the same anatomy in them. Also the stronger thing might be the muscle you are talking about. If that then itis because of certain back exercises that pump the muscle , making them stronger.

Where did u gt these notes

I was a medical student or you can say I studied pre med. Now i am a bca student.