Doubt in a certain category of Physics problems 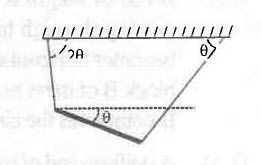 Find the angular acceleration and the tension in the left string just after the right string in cut.

I dont have much clarity on how to solve the above type of problems. Could anyone post a detailed solution to this?

Milun is absolutely correct. To be more specific consider these general equations:

mg−Tv​=ma, where Tv​ is the vertical component of the tension.

∑τCM​=ICM​α i.e., sum of torque of all the forces about the center of mass(only) = Iα

You will end up having three equations and three variables. Solve for them.

Note: Take the torque only about center of mass (just to avoid a careless mistake especially in examination) or if you do take about any axis do be very careful of taking the torque due to pseudo force also.
(so that you don't commit the same mistake which I did when I first solved such type of sum :D)

On a side note, which books would you recommend for practicing good sums for JEE Advanced (especially Physics and Maths) because I am unable to find out one.

I don't know about any good books but I feel it would be more useful to solve many papers. By solving papers we come across a variety of questions and many concepts also get revised.By the way, did ACP teach you Physics?

Karthik, I agree with you that solving papers would be useful. But what I feel is that solving papers are better for developing exam temperament rather than revision. This is because, in general, the question papers involve questions based on aspects which we frequently come across not on those which we miss by whichever means, lack of practice, or lack of revision. For ACP teaching physics, he taught me only EMI, EM Waves and Magnetism.

Thank you very much. One more question. what if the string is replaced by a spring? Then, clearly, the spring in extensible. So, will the constraint change?

If it is a spring , you will know tension (F=kx) and problem would be easy.

In case of spring, that constraint would no longer be true because spring is extensible. However as Jatin says the tension in the spring is known (from initial conditions). Thus overall the number of equations remains the same and we can solve for various unknowns : )

The only important part of such questions is that using the property of the string to be inextensible. So both ends of the string will have the same acceleration along the string. Just write force equations as well as torque equations and use the above constraint relation. Remember the tension in a string can change rapidly but if of were a spring then tension would have been that as before cuttimg

Which two ends are you talking about? The other end of the left string is attached to the wall, so it cant have any acceleration, can it?