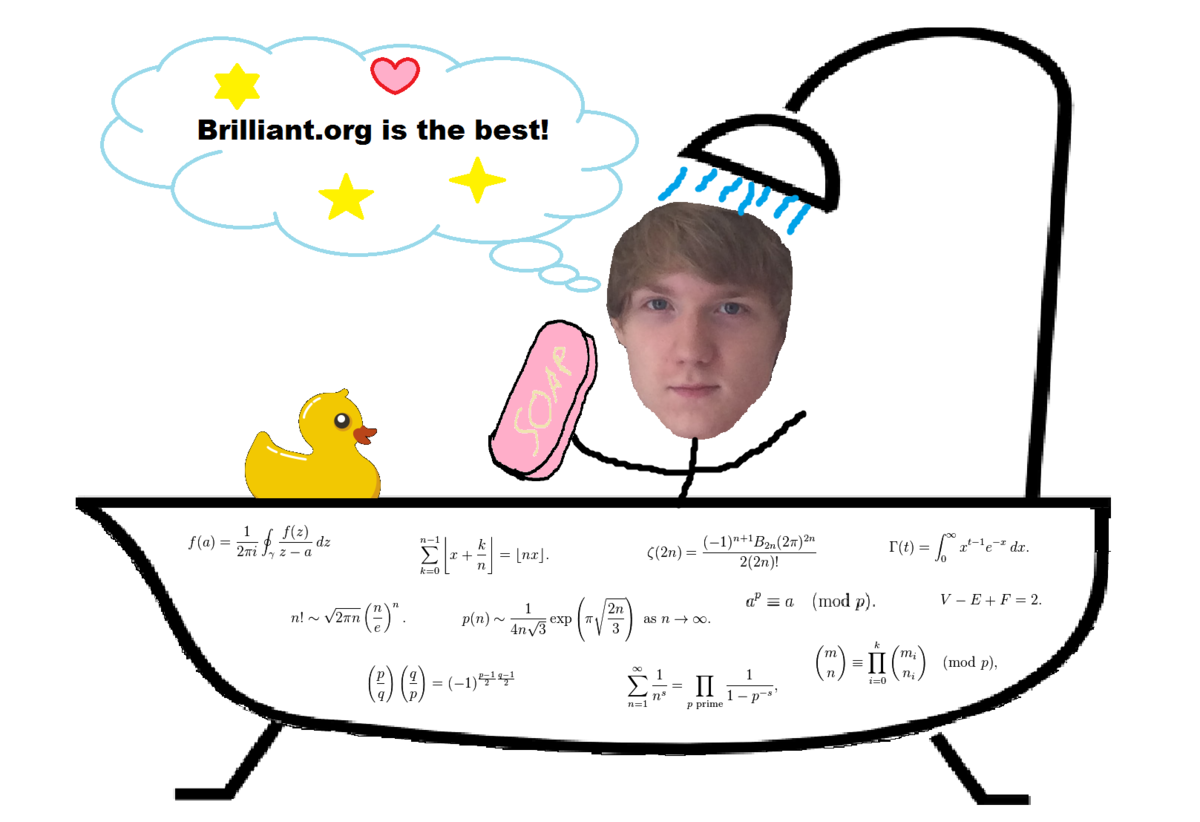 We will be featuring different members of the Brilliant community, so that you can get to know them better. For the fourteenth issue, we are featuring Isaac Buckley, who just started his undergrad studies (in Mathematics) at the University of Cambridge.

Tell us more about yourself.
If you're curious about the odd picture, it's because I think best when i'm in the shower, and have solved quite a few tough problems in there. Brilliant has increased my intellect as well as my hygiene, since there are a lot of tough problems which require deep thought.
I have only been intensely interested in mathematics recently. I began doing fun problems like the ones here only a year ago, and it's shocking how much people can learn and change in such a short time.

What is your message to the world?
Don't let people define who you are or what you're capable of. If you want something enough, you can do it!

I was originally predicted to get a C in my GCSE mathematics. (GCSE's are UK exams taken when you're 16). I didn't like that one bit, and so I stayed after school a few times a week in the mathematics club until i knew all the basic mathematics. When it was time for the exam, I was confident and took the mathematics exam early. I kicked it's ass, getting me the smuggest A∗ of my life.

How did you get interested in mathematics?
I was interested in mathematics because of 2 things: Proofs and Creativity.
When I realized that I could use math to prove things, it was the closest thing to ultimate truth that I could think of. This gave me immense comfort, and sparked my interest.
Later on, I felt that mathematics was a fun adventure in discovery. It helped me understand what it meant to be creative, and how I could create and discover new things.

My love for mathematics drove me to pursue it in my spare time. When it came time to choose what to focus on, it felt like a no-brainer.

Which aspect of mathematics are you most interested in?
My interests are constantly changing. If I had to pick a topic, it would be analytic number theory. Though I'm not an expert in it, I'm really interested and plan to take as many related modules as possible.
My favorite theorem is Euler's partition theorem, which states that the number of ways to write a natural number as the sum of distinct natural numbers is equal to the number of ways to write the same natural number as the sum of odd natural numbers. This is a simple statement to understand, and has an elegant proof. It has opened up numerous related problems, and more advanced theorems of the same type have been discovered.

What is it like being away from your parents?
I enjoy it. I like to think that I'm pretty independent, and can take care of myself. Moving away wasn't scary for me, as I had been looking forward to it for a long time.
They take pretty good care of you. For example, I get 3 courses served everyday in a fancy old dining hall, and there is a cleaning service that does basic maintenance (like vacuuming on Mondays).

In university, what was the hardest thing to get used to / overcome?
The hardest thing to get used to is the workload. The amount of content that we learn on a daily basis is ridiculous (in a mostly good way). There is no weekend for the mathematicians here either. It's 6 days a week of intense lectures and the only day we don't have lectures is the day you're solving problem sheets that you've been given throughout the week. It may sound like I'm complaining but I'm really not. I say make it 7 days a week of lectures!

On the flip side, I've had numerous amazing talks, of which 3 come to mind. The first was on Ramsey theory by Imra Leader (the head of the UK IMO team) in which he explained a few crazy results. The second was on the history of quantum chromodynamics by Professor Harald Fritzsch who was one of the main pioneers of the subject. The third was on "the topology of a curve in the neighborhood of a single point" It explained a lot of things, the simplest being what polynomial configurations are possible through a single point (I may elaborate in the comments on this one as it's quite nice).

What do you want to accomplish?
I've just started my undergrad degree. I'm super excited to be around others that enjoy mathematics just as much as I do.
I wish to make the most of my time at university, not just academically but socially. I'm hoping to join as many clubs and societies as i can.
I want to learn all the mathematics i can. Brilliant has given me the perfect bag of tools i need to climb high metaphorical mountains to see all the beauty around me.
I would also love to publish some amazing new results in mathematics and get the highest class of degree.
I've got my eye on the game "The Assassins' Guild"! Who doesn't want to run around a beautiful city pretending to be assassins, c'mon!

What do you wish for Brilliant?
Brilliant has helped me a lot. I am truly grateful for Brilliant and all the magnificent users who share a passion for learning. I would like Brilliant to be more well known. No matter what age, this website has a lot to offer. I believe it makes a difference, and is a huge step forward to sorting out the terrible mathematics education system.
I wish for it to last forever...

Congrats Isaac! :) i am a fan of ur solutions of summation problems . Keep going

one thing i wanted to point out is that @Brian Charlesworth Sir has completed his 700 day streak!! :)

Thanks, Prakhar! It would feel like bad luck to break such a long streak, so I'll try to keep it going for as long as I can. :)

Congratulations, @Isaac Buckley , on being featured, and for getting into Cambridge! My niece studied there on her "year abroad" and thoroughly enjoyed the experience. It sounds like you're taking full advantage of what that esteemed institution has to offer. :)

Thanks for mentioning Euler's partition theorem; It's a surprising result that I wasn't aware of before.

Finally, you mention the "terrible mathematics education system" in the U.K., (not that it's that great in much of North America, India, etc..). What do you find its major flaws to be, and what remedies would you employ if you were in a position to execute them?

Sorry for the slow reply, Christmas got in the way.

Thank you for your kind words!

It's a pleasure to share something new with you Brian. Specially one of my favourite bits of mathematics.

I say it's terrible... but i also have to admit i don't have a solution for it. I think the problem is not everybody can go at the same pace. Lots of people get lost in confusion and give up and other people find it to boring and repetitive. For me the issue was being forced to do boring problems which i didn't want to do. I got around this by doing what i wanted in my spare time. I didn't want to sit rearranging basic algebraic expressions when i could be talking to my friends. A good system would be to push the people who are ready to be pushed and make sure you help the people who need help... don't let anyone give up because they find it confusing, don't let anyone give up because they are bored. Make it interactive and exciting!

I've actually been asked to go talk to some students in my old school and i also might teach them for a short amount of time if i can. I might take up tutoring in my spare time too. After all this i might have a better grasp on how to tackle the issues.

What do you think? I honestly don't know how to fix it (or if it's even broke). I think I'm going to think about it some more.

@Isaac Buckley – Yes, I agree that a crucial part of the solution is the individualization of the educational experience, which can be realized with the aid of readily available technology and suitably trained teachers. This takes money and political (both bureaucratic and union) will, though, both of which are lacking in many jurisdictions. It also requires the successful recruitment of bright and eager young minds into the profession of teaching, which is hampered by the deficiency of pay and "prestige" associated with the profession. There are "success stories" out there, however, even in some inner-city schools in the U.S., so there are foundational templates to work from. Also, some time spent on this site by each and every student wouldn't hurt, either. :)

Thanks for featuring me Calvin!

I think Zuming Liang was the twelfth member to be featured, I should be the thirtheenth? Also it's Isaac, one s and two a's like Isaac Newton.

Edit: Actually I am the fourteenth?

Ooops, sorry about that! Fixed.

Since you've been a featured member, I've been paying more attention to the problems you've been posting. They are great problems! I can tell that 1) you're relatively new to math, and yet 2) you have great potential. You have a curious mind and you think about math problems just because you want to (or they give you an excuse to take long showers?). My hope for you is that England never has a water shortage.

Congratulations Isaac! Glad to be associated with a smart young lad from Cambridge. I bet you will get really inspired by Newton, Maxwell, Turing, Hawking.... Hope to here from you in the future.

Congrats brilliant and u

Congrats for being featured !!

Thank you! I enjoy your problems :) Keep posting them!

it’s nice to see you making your mark. you’ll reach newton level one day :) i really hope this isn’t weird. you won’t see this anyway.

hello isaac, do you remember me? congratulations by the way