Do you think the world will end in fire or ice? Share your thoughts here.

Fire and Ice by Robert Frost

Some say the world will end in fire,

Some say in ice.

From what I've tasted of desire

I hold with those who favor fire.

But if it had to perish twice,

I think I know enough of hate

To say that for destruction ice

Oooh I like this one. Nice poem too. We need more poems on Brilliant.

The question kind of depends on what we mean by the "world ending." The Earth is kind of indifferent to whether it is frozen solid, or a smoldering magma ocean. It has in fact been both in it's past.

One of the most exciting geologic controversies of the past several decades is the Snowball Earth Hypothesis. You can read a decent overview of it's history here. My sense is that it is more likely for the surface of the Earth to freeze solid before any event that might immolate it shows up. All it takes for another snowball earth cycle, is to have a cold stretch of the milankovitch cycle correspond with a tectonic configuration that places most of the land masses at the poles. Something like that could occur in the time scale of 100's of millions of years.

That said, I am sympathetic to arguments that assert that burning in the fires of total nuclear war, or incineration by an angry alien species are likely to happen before that.

Oh...by big freeze, you mean the freeze death of the whole expanding universe. Sorry I was thinking too small.

@Peter Taylor – Once the sun becomes a red giant sometime about 7 billion years from now, its diameter will expand beyond Earth's orbit. Interestingly though, even though the sun by then will have lost much of its mass, so that Earth's orbit will consequently expand, nevertheless the sun will expand faster than Earth's orbit. Once the Earth is inside the sun, even though it isn't necessarily "vaporized right away", because of friction losses, the Earth will ultimately spiral towards the dense center of the red giant sun, and be assimilated. Resistance is futile.

On the other hand, Poincaire famously proved that it's not possible to know with certainty (this is a result in classical mechanics, not quantum mechanics) what exactly will happen to Earth's orbit far into the future. It's quite possible (however small the probability) that because of the way the other planets just happen to interact, Earth could simply be flung out of the Solar System, and thereby end up being a frozen rogue planet.

So, Fire or Ice? Oddsmakers will favor the former, but the latter can nonetheless still happen.

In case anyone is interested, in a scale reference. I found this graphic comparing a large red giant and a small red giant with our own sun. I assume they are renditions made from data from the kepler space telescope. 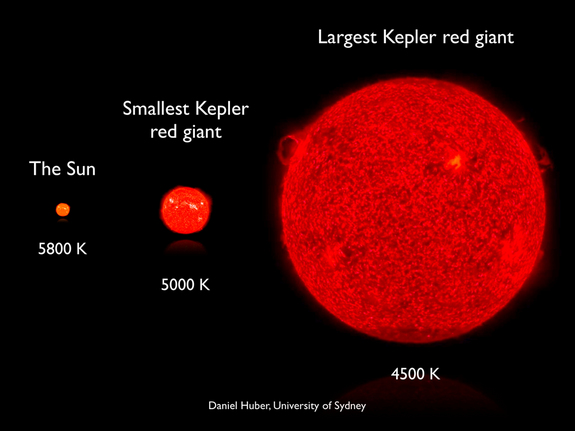 I believe that the world will end due to excessive population growth. All environmental biologists and statisticians agree that humankind’s best chance of long-term survival occurs with a global population of around 4 billion. The current population is a little more than 7 billion.

Confucius (551 - 479 BC) wrote that, "excessive (population) growth may reduce output per worker, repress levels of living for the masses and engender strife."

Writing at a time when world population stood at 100 million, Aristotle (384 - 322 BC) observed that, "[a large increase in population would bring] certain poverty on the citizenry, and poverty is the cause of sedition and evil."

Writing when world population had reached 450 million, Niccolo Machiavelli (1469 - 1527) predicted, "When every province of the world so teems with inhabitants that they can neither subsist where they are nor remove themselves elsewhere... the world will purge itself in one or another of these three ways floods, plague and famine."

The English clergyman Thomas Malthus (1766 - 1834), wrote when the human population was at 900 million, "Population, when unchecked, increases in a geometrical ratio. Subsistence increases only in an arithmetical ratio."

Robert McNamara, the President of the World Bank from 1968 to 1981, said, "Short of nuclear war itself, population growth is the gravest issue the world faces. If we do not act, the problem will be solved by famine, riots, insurrection and war." This view was shared by people as diverse as Albert Einstein, Lyndon B. Johnson and Martin Luther King.

Consider this. It took the earth’s population thousands of years—from the early dawn of man all the way to the early 1800s—to reach 1 billion people. Then, astoundingly, it took only about a 100 years to double the population to 2 billion in the 1920s. After that, it took a mere 50 years for the population to double again to 4 billion in the 1970s. As you can imagine, we’re well on track to reach 8 billion very soon. Just today, the human race added another quarter-million people to planet Earth. A QUARTER MILLION. And this happens every day—rain or shine. Currently, every year, we’re adding the equivalent of the entire country of Germany.

Check this image- http://www.susps.org/images/worldpopgr.gif The world population is growing at an exponential rate and I think we all know the magic of exponential growth.

What is most disconcerting to me is the fact that even if the world population doesn't grow exponentially and levels off, our current population's consumption of natural resources is not sustainable. We don't necessarily need to continue growing exponentially to start facing a planet that is overcrowded in proportion to the resources it has.

I agree. But how can we control our consumption of natural resources?

I don't think that even half the people would be ready to compromise their type of lifestyle for the sake of protection of the resources.

Even the alternative sources of energy affect the environment in a very bad way during their manufacturing.

Can you suggest some more ways in which we can mitigate our use of resources and also the changes that we can make in our lifestyle to support the environment?