There are four properties of wavefunctions that we must assume for QM to work. The wavefunction Ψ must:

where Ψ∗ is the complex conjugate of Ψ

4) The average is defined to be the expectation value

If you have encountered statistics before, the above concepts may seem vaguely familiar. To those who haven’t, the good news is that you must now learn to be well acquainted with statistics because QM is all about the behaviour of wavefunctions and its corresponding probabilities. In the orthodox interpretation, the measurable quantity (say the position of a particle) is spread all over space, where in some places there is a higher probability of the particle being there. We can calculate this probability by evaluating the integral of the modulus of the wavefunction Ψ∗Ψ. 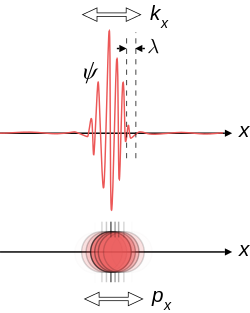 But where is the physics behind this? In the quantum description in the world, a particle can exist everywhere in space at varying degrees of probability as prescribed by its wavefunction. Once we make a measurement of the particle, the particle will lock down on a location by collapsing the wavefunction, producing a sharp peak where the probability becomes 100%. Now if we immediately measure the particle again, we would discover that the sharp peak stay where it was last measured. However, if we were to stop measuring the particle and give it some time, the sharp peak will gradually spread out. Since QM is a statistical theory of physics, it follows that everything we observe follows statistical rules. Let us begin with two important quantities: position x and momentum p. In classical mechanics x,p are just numbers, so this is still true in QM but with a twist. In QM, we take the expectation of an operator acting to the probability of the wavefunction.

We will accept these expressions for now and study them in more detail later. But first, let us understand why we care about the expectation values of physical quantities. Consider the following scenarios:

From a scientific point of view, which scenario sounds more experimentally sound? Hopefully you chose 2), because that is how science is done. Every experimenter should be able to repeat an experiment and agree that their results corroborate with physical principles. You should think of the expectation value as a stronger average.

When we measure the position or momentum of a particle with some wavefunction Ψ, we will notice a problem. Although we know the expectation value of said variables, the wavefunction still has some spread Δx=x−⟨x⟩ or Δp=p−⟨p⟩. Now it is experimentally meaningless to talk about the spread because we will produce useless data if most of the numerical measurement equals the expectation value. Thus we use the statistical measure called variance (σ2) to circumvent this problem. Variance is calculated as the expectation of the square of the spread, for example

We take the square root of the variance to calculate standard deviation, which measures the variation of measurable quantities. The standard deviation is convenient to QM because we can now discuss the uncertainty of, let's say, the position or momentum of a particle. We will later derive the Heisenberg Uncertainty Principle (HUP) using operators and Dirac notation, so for now we shall take a sneak peak of the HUP:

Visit my set Lectures on Quantum Mechanics for more notes.

Use the Schrödinger equation to show that ∂t∂ρ​+∂x∂J​=0.

In fact, the conservation of probability extends to three dimensions ∂t∂ρ​+∇⋅J=0.

What do you mean?

@Steven Zheng hey could u please upload a few questions on expectation of Hamiltonian operator.The previous question was very nice.

Then they will be pretty much the same question. The thing I find hard about posting university level physics problems is that they are largely derivation based, not numerical.

Thanks man appreciate it