Continuing on the subject of the least action principle, I have come across a conundrum. Suppose we have a moving body undergoing uniform circular motion about a fixed body (like a planetary orbit, more or less). 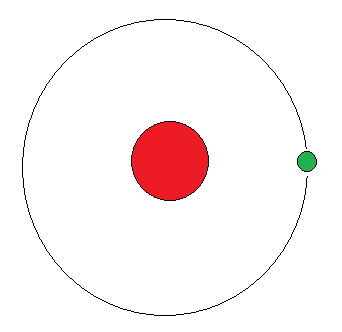 Suppose the orbital period is T. During the orbit, both the kinetic energy and the gravitational potential energy of the orbiting particle are constant over time. Consider one complete revolution, in which the particle starts at (x1​,y1​,t1​=0) and ends up at (x2​=x1​,y2​=y1​,t2​=T). The action for this path is:

Consider another "path", in which the particle stays in its original position for the entire time. Note that the starting and ending space and time coordinates are identical to those of the proper orbital path, and the potential energy is identical too. Here, the action is:

By my reckoning, this should not be possible. How can this apparent contradiction be resolved?

Also, if you look at the standard high-school physics problem of a ball being thrown in the air from level ground, the action for the proper kinematic path is negative, while the action for the stationary path is zero. So everything works in that case. In particular, note that the assumption of a stationary Earth in the high-school problem does not seem to confound the process. In the high-school problem, we just consider a potential field without worrying about where it comes from. I could have formulated the orbital problem the same way (with an ex-nihilo potential field).

Just seeing this. For your orbit where the satellite doesn't move, it seems like we can make U arbitrarily positive by moving it closer to the Earth, and asymptotic to zero by moving it away, so that solution doesn't seem like it has stationary action (i.e. it's not a local extrema in path space) and wouldn't be a physical solution.

I imagine that the circular orbit would be found to be a local minima/maxima if we perturbed v and r?

@Steven Chase – I meant something slightly different. I have a calculation in mind but probably not til tonight or tmw. Talk soon.

@Josh Silverman – OK, I did a calculation to find the action for two neighboring paths that both have the same start/end-point and take the same overall time. One of them starts by moving radially outward a distance ε, spending most of the orbit stationary at R0​+ε and then returning to R0​ at the same speed that it went out. That trajectory has action S+​. The second trajectory is identical except that it moves in to R0​−ε and that is given action S−​. According to my calculation, the default action S satisfies S−​<S<S+​, so that path (staying at R0​ the whole time) would not be stationary (a local extrema).

@Josh Silverman – So the conclusion is that the value of the action is not the only factor to consider. There are paths which have a smaller action than the true physical path, but they are disqualified since they fail certain "derivative checks". So, naively, the process would be:

@Steven Chase – I think we are missing a point here. A path is physical when its action is a local extrema. This might mean that a physical path has an action that is greater than, less than, or equal to non-physical paths.

But if a path is physical it will always be a local maxima or minima relative to small deviations about it.

By derivative checks, I assume you mean the Euler-Lagrange equations. Anything that comes out of those should be a local extrema since that's the assumption that leads to them.

@Josh Silverman – Interesting. So I got carried away with the literal interpretation of "principle of least action". It's actually the "principle of locally-least action". But that doesn't sound as catchy. Thanks for clarifying. I had done about half a dozen exercises in which an obviously non-physical path had a smaller action than the known physical path. Not until this orbital conundrum did my original interpretation fail. I guess that confirms the usefulness of doing thought experiments.

@Josh Silverman – Or as you said, a physical path is one for which small perturbations in the path have essentially zero effect on the action.

@Steven Chase – Yea basically. I think people like to say least action because minimization principles are attractive conceptually. The first time I was learning Lagrangian mechanics, I noticed that nobody seemed to be checking whether it was actually a minimum or not, curious...

As it turns out, the deep justification comes from quantum mechanics where the competing paths tend to get killed by interference and the physical one wins out because the phases line up. I would highly recommend reading Feynman's QED where he gives maybe the best explanation.

I am commenting as I find this post interesting. My thought on the subject is this:

If you consider a particle to have nonzero kinetic energy and non zero potential energy, the action minimises for a circular path. However, you have compared two cases where one particle is at rest while the other moves in an orbit. Shouldn't the comparison be between cases where the object is in motion in both cases?

For example: consider two cases where the particle moves at a constant speed in an elliptical orbit while the other in a circular orbit. The action will be lower for the latter case. I expect this to be the outcome but I will cross check this myself soon.

Greetings. I wasn't aware that static (non-moving) paths were off-limits. I don't think they ought to be, really. I think the general Feynman notion is that no paths are illegitimate a-priori, and that the only thing distinguishing paths (and determining physicality) is the value of the action. The only thing the two paths must have in common is the space and time coordinates of the starting and ending points. And in the high-school problem, the analysis works out perfectly well with one path having no motion.

But I guess I must be missing something

My point is that the action for a stationary object is expected to be least because it does not actually follow any 'path'. This is why I feel that the comparison is a bit unfair on these grounds. But I will dwell on this thought a bit more.

@Karan Chatrath – Let me frame this differently. To compare two scenarios using the least action principle, the initial conditions must be similar. In this case, one particle moves at a constant speed while the other is static.

An example I can give is the case of projectile motion. If the particle is projected with a certain speed and angle, the action is minimum for a parabolic path. But if we compare the action for two different sets of initial conditions (one case where the speed of projection is finite and the other where the particle is static), that does not seem logical. Hope I am making sense.

The example I gave needs a bit of rethinking. Upon working it out in my head, I see that the action for the case of a circular and elliptical orbit turns out to be the same for the situation where potential energy and speed is constant.

For a particle to be moving in a circle, it has to experience an external force that compels it to move in that path. Else the particle that moves at constant speed and no potential is simply moving straight ahead. The action integral also needs to account for the work done by said external force. I realise that I have posted too many comments.

Also, suppose I had asked another variant of this question. Let's say that for S1​, instead of going in a uniform circle, the particle instead starts with some speed and moves out to a greater radius per F=ma and eventually comes back to where it started. Then for S2​, the particle just remains stationary for however long it took the particle to make its round-trip journey in the first case. I believe you would find that S1​<S2​ in that case. Had I posed that question instead, everything would have seemed fine, and the second case would have been obviously non-physical since it had a greater action than the first path had. And none of that would have required velocity matching at the endpoints. The high-school problem is similar. As far as I know, it's just this one case that is throwing everything off.

@Karan Chatrath – Here is the simulation for the non-circular-orbit version of this problem.

@Steven Chase – Thank you for sharing this. This example makes my point invalid. Surprisingly, even I was simulating a scenario. I will think about this and post conclusions if I have any.

@Karan Chatrath – Thanks for your interest. I am clearly still missing something, because I have been unable to resolve the orbital paradox.