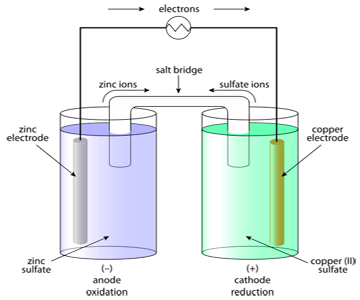 ∙ Note that, the Standard Reduction Potential of Hydrogen is zero.

Keeping these points in mind, we can draw some general conclusions, such as,
∙ If metal A is situated above metal B in the electrochemical series, then A can displace B from its salt. The reason for this is that, since Eredo​(A)<Eredo​(B), implying that Eoxo​(A)>Eoxo​(B), thus suggesting that A has more tendency to form cations than B.

NOTATION FOR REPRESENTING A GALVANIC CELL
First of all, a Galvanic cell works through a redox reaction. One metal is oxidized, while another metal's cation is reduced. I think it will be best to approach this idea through an example.

∙ The interfaces, across which a P.D exists, are shown by a vertical line ( | ). In this case, the two half cells are represented as,
Zn∣Zn+2 and Cu+2∣Cu
These indicate that a P.D. exists at the Zn and Zn+2 ions interface, and similarly at the Cu and Cu+2 interface.

∙ Sometimes, a comma is observed in the formation of the half cells. For example,
Zn,Zn(Cl)2​∣Cl−
These indicate that Zn and Zn(Cl)2​ together constitute the electrode.

∙ The contact between two solutions by means of a Salt Bridge (will be explained later) is indicated by double vertical line (||) between them. For example,
Cu+2∣∣Zn+2

∙ The concentration of solution, pressure of gases and physical state of solids and liquids involved are indicated in the cell formation. For example,

In the next post, we shall learn how to calculate the standard EMF of any cell, with the help of our new tool : Electrochemical Series.

It will take a while to post the next note, since I have my 12th grade's Final Board examinations coming up, which will end at 14th March, 2014.
I will post my next note, a few days after this date. Sorry guys.

Good luck on your Boards Anish! Let us know if there is anything people on Brilliant could do to help you prepare.

I have already learned too much here at Brilliant. This site is like a god gift to a student who is preparing for an entrance exam. Thank you so much (I cant tell how much) for your help..Its been a wonderful journey so far.!

@Anish Puthuraya – Anish, Best of Luck for your boards. I also have my 10th grades finals coming up on March 3 and they end on March 26.

@Soham Dibyachintan – Good luck to you as well, do it nicely.
btw its Anish, not Danish..lol

@Anish Puthuraya – Sorry Anish that was not intentional and thanks a lot.