Hi @Akhil Bansal, I am having trouble understanding your question. Can you rephrase or include some more details?

Now, we have used the sign convention twice.First during deriving the formula, and second time while using it in numerical. Why so?

@Akhil Bansal – Is your thinking like "if we apply the convention once in the derivation, and then once more in the application, the sign convention will be wiped out (two negatives make a positive)"?

@Akhil Bansal – Hi @Akhil Bansal, I think there is a simpler way to obtain the result that avoids this confusing sign convention business. If we call do​ the object distance, di​ the image distance, and f the focal length, then using similar triangles, it is easy to show

Note that each of these variables are physical horizontal distances measured in a coordinate system whose origin is at the surface of the mirror (positive in front of the mirror, negative behind). There is no sign convention, just a straightforward use of a coordinate.

That equation can be rearranged to give you the usual result f−1=do−1​+di−1​.

There is no need for a sign convention, just figure out where the focal point is, and use the coordinate system to measure the distance to it.

@Akhil Bansal – Do you feel this answers your question?

@Josh Silverman – Yes, i am satisfied..

So , I am gonna try to solve it using some intuitions , so lets say you have a formula or function that adds two numbers cool? say f(x,y)=x+y , so what this means that if you plug in x=2,y=4 function is gonna give a 6 , now thats the essence of how you measure these two things x and y themeselves ; okay so i give you a scale and allow you to measure distances freely , you can shift your origin(0 point in your scale and start measuring ), hmmmm so you can measure distances easily right ? you can put 0 here and measure 2cm and then you can put 0 there and measure 4 cm right? its absolute , the distances are absolute , you are changing your coordinate system according to your needs and then measuring these value in a absolute way(its kinda relative too in some sense.) , but suppose now i tell you that you cant move your 0 marker anywhere you like. what this means that your 0 is now fixed and you are measuring everything relative to that 0 marker in all moments of time, but i extend your toolkit , i extend your scale to include -ve numbers , aha! thats it , now how you modify your addition formula(function) so that it works in a relative way , see now suppose you are at 0 and i told you to add two distances , one of which lie on oppsoite side of your scale , remember you can't move your 0 here and there , its fixed , so what to do? see one distance can be measured easily which is to the right of your 0 point say its x=2cm , now you already know that you cant turn back and measure the back distance (cant rotate your scale remember?) , so you will measure that back distance in your negative scale and its y= -4 cm ,(-ve is that extra shit that you get when you are not allowed to rotate your scale) so now x=2 cm and y= -4 cm but you want a general; function that works everytime , now what about if you write this function as f(x,y)=x-y , see i added my first sign convention here , ok! and now when i actually plug in the values i plug x=2 y =-4 so i get f(x,y)=2-(-4)=6 yeah! thats true isnt it ? so thats how i think it works.

Thak you soo much.. I understood it clearly.

Personally aometimes I do feel these confusing

Let's see if I can clear it @Akhil Bansal

In the mirror and lens formula that we use, v,u and f is are not distances (of image, object and focus resp.)

Hence, in the derivation when you take distances, you have to take modulus of the coordinates

and in the formula, put coordinates 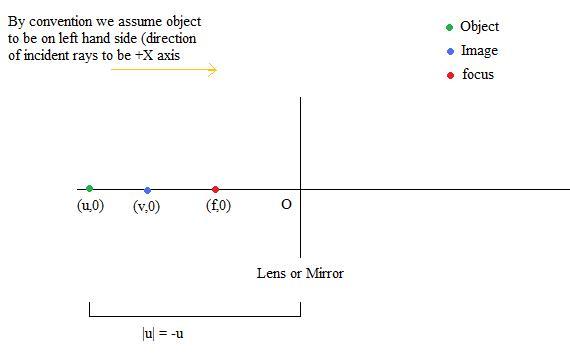 @Akul Agrawal but you didnt clear the doubt that even if we take the modulus, we still apply -ve in derivation of formula. Then why should we apply -ve sign again when doing questions.

Lets try to understand the solution in deep. Actually,say, we are talking of u which is,say, negative.

Then in the derivation because we have to put only length which is always positive, we will have to put

-u. But NOTE we have taken u to be negative at each step of our derivation. So while applying the formula, obviously we will put u negative.

@Akul Agrawal – You are right, but your explaination is not according to my question. Please read the question again..

@Akhil Bansal – I think I have answered your question. Please read it carefully. If I conclude in one line, we are not applying sign convention twice. We are applying it only once.

Remember derivation of formula is purely mathematical without any sign convention

You may verify by taking different u and v (+ve and -ve), that the formula remains the same.

then we find the union of all the situations and say the formula to be true for all cases.

Note u and v are coordinates and not distances

@Akul Agrawal – You are confusing me. >Rememberderivationofformulaispurelymathematicalwithoutanysignconvention. Well if sign conventions are not applied then we cannot even derive the formula. link given by @Akhil Bansal

@Satyajit Ghosh – ACTUALLY WHILE DERIVING WE ARE NOT APPLYING SIGN CONVENTION. WE ARE APPLYING IT JUST WHEN WE CHOOSE SIGN OF U,V OR F I.E. COORDINATES OF PT OBJECT, PT IMAGE AND FOCUS RESP.

@Akul Agrawal – Thats what is the doubt. If >WEAREAPPLYINGITJUSTWHENWECHOOSESIGNOFU,VORFI.E.COORDINATESOFPTOBJECT,PTIMAGEANDFOCUSRESP. Then why apply the signs again when doing questions?

@Satyajit Ghosh – we are putting values of the same sign we chose before deriving. What's wrong with that?

@Satyajit Ghosh – To be very precise, just remember that u,v and f are coordinates and forget everything about sign convention. This is the best solution i can tell @Akhil Bansal and @Satyajit Ghosh

because sign convention only says that we must take +ve x axis in direction of incident rays.