The aim with SnackDown is to pit the finest computer programming brains from different parts of the globe against each other, under one roof in India. SnackDown also provides a unique opportunity for the top programmers of the world to get a flavour of India and at the same time let the Indian programmers meet top global programmers in flesh and bones.

The competition is open to everyone including the middle and high school students as well as working professionals, virtually having no formal eligibility criteria. Also, SnackDown 2017 isn't restricted to team participation only. Which means, "You can perform solo in this year's SnackDown!

SnackDown had a humble beginning with the inaugural edition of SnackDown witnessing participation from 639 teams of 3 members each taking part in the competition. Since then the contest has grown by leaps and bounds, with every subsequent edition triumphing its precursor. Today, SnackDown is being considered to be one of the most coveted onsite competitive programming titles across the globe.

If you can code, you can compete in SnackDown. If you are an aspiring programmer or know someone who is, we would like to see you compete. Join CodeChef and take the first plunge towards having fun with the best programmers out there.

If you have any queries regarding SnackDown, you can always reach us at: snackdown@codechef.com 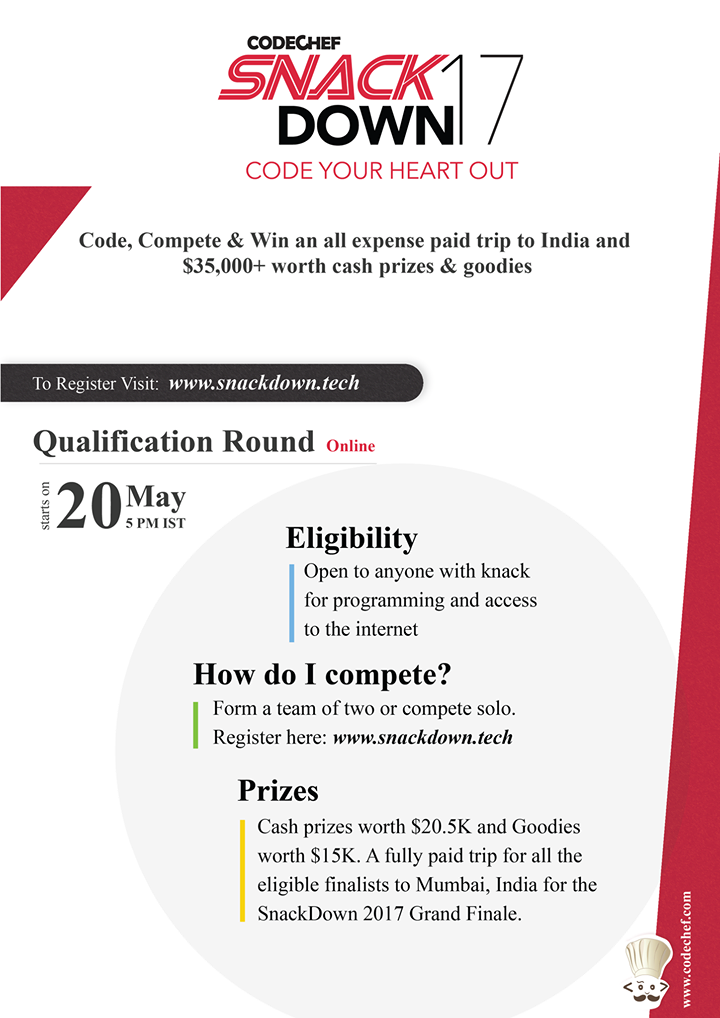 Top 300 Teams In the Elimination Round will get a cool SnackDown  t-shirt.

Every team member of the qualifying teams for the elimination round will get a domain name from Radix registry.

All the teams advancing from the Qualifiers to further rounds will receive a digital certificate of Participation from CodeChef. 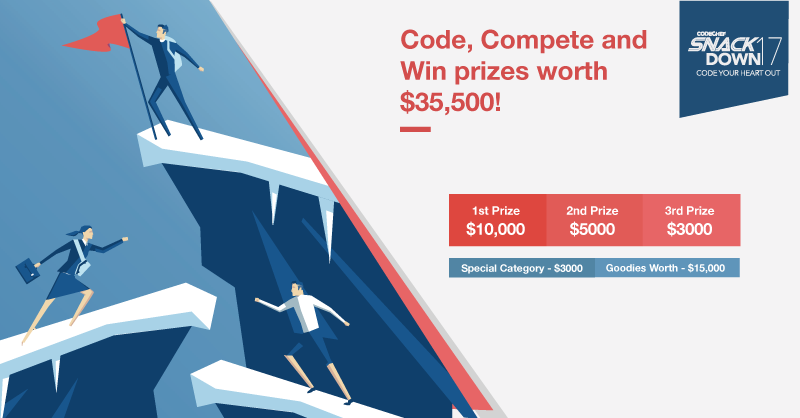 Online Registration: Register in a team of up to 2 members to take part in the online qualifiers.

Online Qualifier: Duration: 4 days Teams solving at least one problem will advance to pre-elimination round.

Online Pre-Elimination Round-A: Duration: 24 hours Teams under top 1000 ranks will advance to the elimination round.

Online Pre-Elimination Round-B: Duration: 24 hours Teams within top 1000 ranks will advance to the elimination round. Note: Teams who have qualified for Elimination from Round A, will not be allowed to take part.

Online Elimination: Duration: 5 hours 57 teams will be invited for the onsite finale. Details about how teams progress for finals can be found here.

1 JULY Saturday - To be declared

Detailed version of the:

Check out the FAQs

ONCE AGAIN, GET REGISTERED!