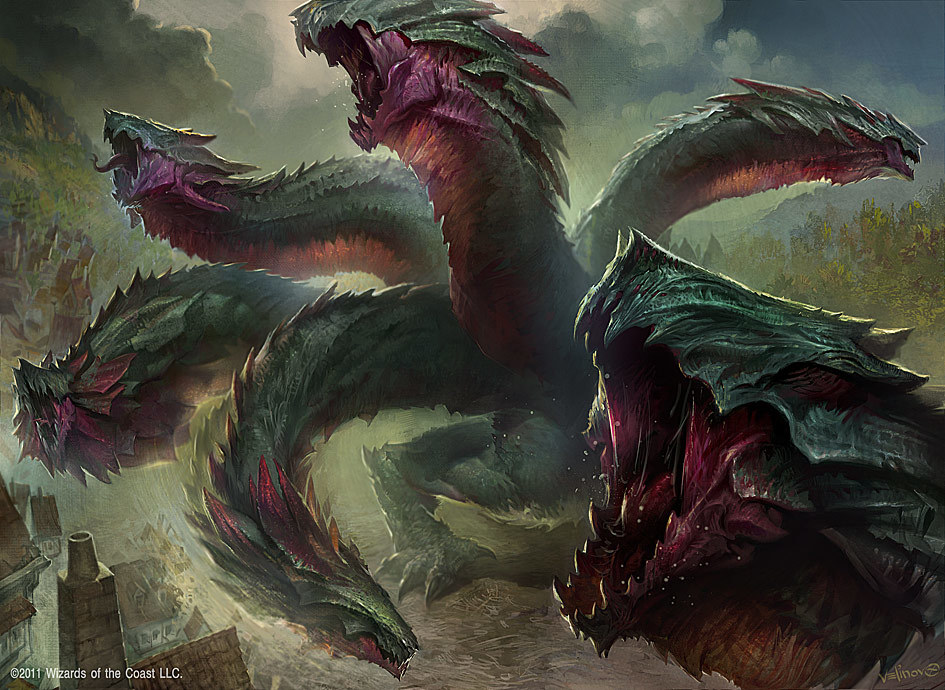 Our magnificent friend Daniel Ploch inspired me to publish this note. My proposed problems are thus not very original, and clearly inspired by his The Hydra and by many of Dream Theater's songs.

Before a sword-armed hero stands a mythological n-Hydra. It begins, graciously enough, with but one head. The hero has one way to attack the beast - slice off its head.

But this is no sure method, for, with equal probabilities, a severed head of the Hydra may either wither into nothing... or sprout again as n new different heads.

Way off in the distance, stands a wizard, watching the combat through his looking glass. He is, however, very bored of watching the epic combat, since our hero can only slice one hydra-head per minute, leaving the magician with nothing but an incredible desire to sleep. Our spectator is blood-thirsty though, and randomly wakes from his naps from time to time, counting the many defeated and alive heads of the myth beast.

Let Pn​ be the probability that the hero defeats the n-Hydra.

Let T be the time, in minutes, since the combat began at T=0.

Consider that the hero only takes action on integer times of T, and so does the wizard.

Level 1: Show that victory is always certain for n=1.

Level 2: Show that victory is always certain for n=2, although it may sound counter-intuitive.

Level 4: Consider that the wizard takes a full-combat nap, waking up only after the end of the n-Hydra's existence. How many dead heads is he expected to find? Display the numerical result for n=3 and find a formula for a generic value of n.

Level 5: Evaluate, for a generic value of n, the expected number of D dead n-Hydra heads and A alive heads counted by the wizard throughout integer values of T>0. Consider that the wizard immediately wakes up and leaves if the last Hydra head is defeated.

Here's a way at looking at it:

Consider the expected value of the number of heads that appear each turn.

Thus, the number of heads expected to appear after k heads are chopped off is 2kn​.

When 2kn​>k, or n>2, then the expected number of heads to regrow after getting rid of all existing heads is larger than the number of existing heads before the warrior cut them, so on average the case is hopeless.

Thus, the only way to kill the hydra is to lop its head off the first go, which has probability 21​.

That answers L3 intuitively. Can you post a pure algebraic solution?

Also, proceed with the expected value reasoning to answer L4 and L5.