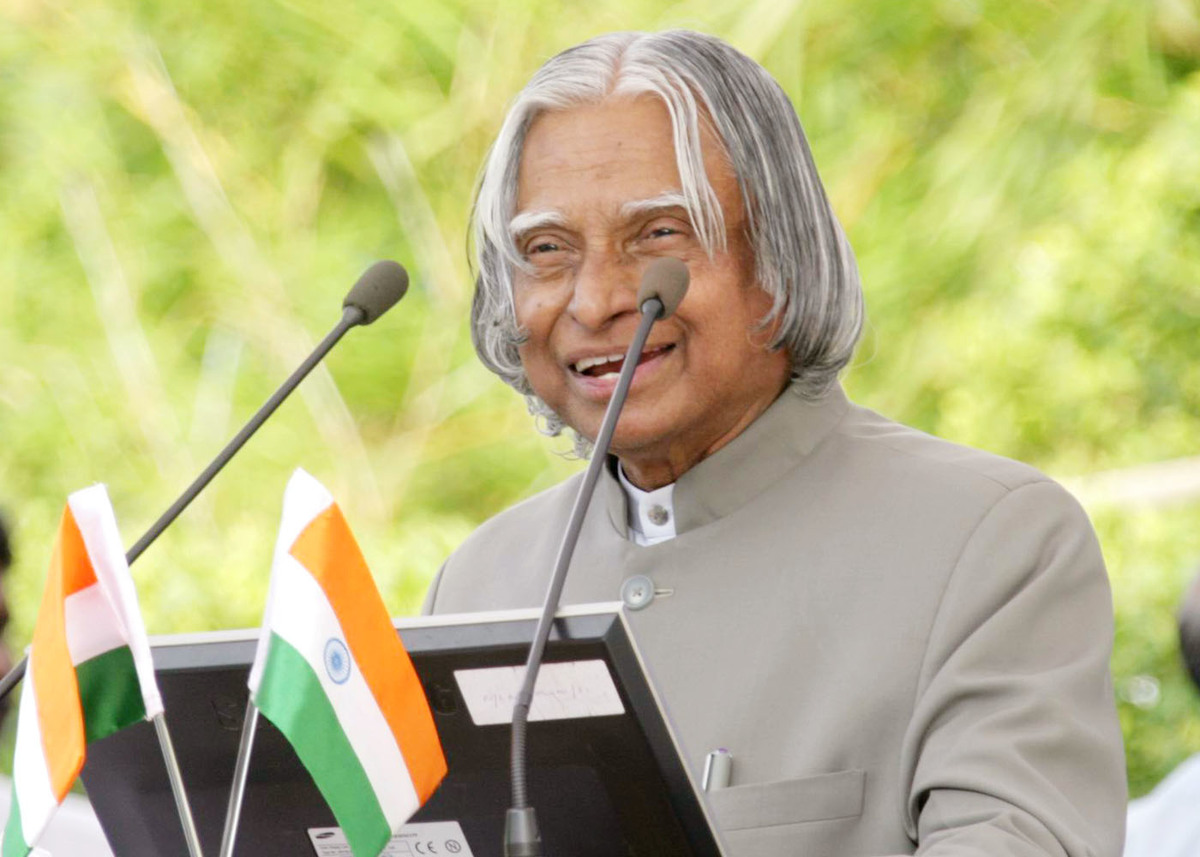 Former President APJ Abdul Kalam, the 'missile man' who came to be known as 'People's President' died on Monday after he collapsed during a lecture at the IIM in Shillong on Monday evening.

Dr. A.P.J. Abdul Kalam, popularly known as “Missile Man” born in a middle class family, seen and faced problems and hardships of middle class, never daunted and depressed of failures, rose to the height of first citizen of India, the president of India, a visionary, a pragmatist, a poet, a good human being, a complete man. He is the architect of India’s integrated missile development program, recipient of Bharat Ratna award, a rare example in today’s world where most of the people are engulfed by mediocrity, hypocrisy, corruption, the likes Dr. Kalam want to conserve”. Born on 15th October 1931 At Rameswaram in Tamil Nadu, Dr. Avul Pakir Jainulabdeen Abdul Kalam, specialized in Aeronautical Engineering from Madras Institute of Technology. Dr. Kalam made significant contribution as Project Director to Develop India’s first indigenous Satellite Launch Vehicle (SLV-III) which successfully injected the Rohini Satellite in the near earth orbit in July 1980 and made India an exclusive member of Space Club.

Dr. Kalam is religious to a fault and is a rapacious reader of both Bhagwad Geeta and the Kuran of the great Tamil Saint Tirvuallurvar. He always shares his achievements and success with his teachers and colleagues. When the award of Bharat Ratna was bestowed on Dr. Kalam, for his splendid achievements, he said, “I couldn’t have done it by myself. Behind me there were thousands of scientists. I only shaped the program.” In a span of 14 years, he lined up Prithvi, Agni, Trishul, Akash, and Nag and finished the long pending Arjun Project, pushed forward with an indigenous aircraft engine Kaveri. He vowed to make India self-reliant in military war fare by 2005 AD. An apostle of unparalleled genius, he never took excuses of lack of funds or lack of cooperation etc. in the glorified path of achieving his goal. This dreamer of making India a super power, tells his countrymen and colleagues: “Dream, dream, dream and dream. Turn the dream into thoughts and thoughts will transform into action.” 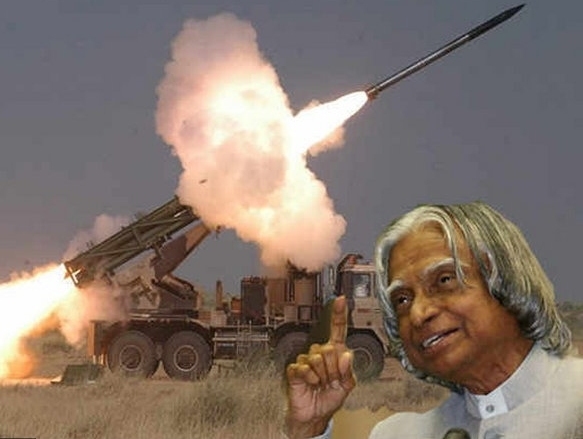 Earnestly proud of his heritage, Dr. Kalam asks the people of India, to discover the untapped strength. Let the Indians now totally delink from the legacy of the past, hear this inspiring revelation: India made the world’s first rocket, says Dr. Kalam in annotation to one of this poems. These rockets are laced in the British War Museum. Small tube with gun powder, tiny nozzle and warhead (a carved sword) which were used in defeating the British army at the battle of Srirangapatnam, by Tipu Sultan.

After becoming President. Dr. Kalam has been doing a very pious task of exhorting and encouraging the youth, to rise to the occasion and never felt shy of failures, have faith in Almighty and work hard to achieve whatever you like to achieve in your life. Dr. Kalam has become a source of unending inspiration to the youth of today. He is very popular among the children, among the youth and among the matured citizen throughout the country.

When the developed countries, the super powers, stuffed with arrogance because of the unlatching might they possess, jeered at country, struggling to arrange basic needs of the people and depending for arms on them, to defend its sovereignty, Dr. Kalam, rallied the intelligentsia and scientists together to realize the ambition of integrated Guided Missile Program.

Dr. Kalam, like very great man, never feel depressed or distressed with the failures, he always move forward with full dedication and devotion to the task he enjoined upon. He quotes an example of his life, that when he came out of HAL (Hindustan Aeronauticals Ltd) as a graduate for a career in the Indian Air Force. He was called for the interview in Dehardun and stood ninth in the batch of 25, but only eight got selection. Disappointed with the failure, he visited the pilgrim centre of Rishikesh where he met Swami Shivananda and introduced himself to Swamiji. He narrated him his story of disappointment. Swamiji told him, “Accept your destiny and go ahead with your life. You are not destined to become an Air Force Pilot. What you are destined to become is not revealed now but it is predetermined. Forget this failure s it is essential to lead you along your destined path. Search instead for the true purpose of your life. Become one with yourself, my son!” None, not even Dr. Kalam himself could imagine that the was predestined to become the Missile Man of India, recipient of the highest civilian award “Bharat Ratna” and thereafter the President of the largest democracy of the world. Dr. Kalam is a living ideal personality, an undying inspiration to the young generation, always exhorting them not to be daunted by the failures and work hard with fullest dedication; devotion and sincerity, Success with positively crowns your head.

In 1962, while addressing the Rice University in Houston, then President of USA, John F. Kennedy proclaimed about Dr. Kalam; “If history teaches us anything, it is than man, in his quest for knowledge and progress, is determined and cannot be deterred”.

Dr. Avil Pakir Jalaluddin Abdul Kalam, the present President of India, popularly known as Missile Man of India, is also known for his zest for life and pursuits that might make other scientists astonished. An reader, a lover of classical music and a poet of Tamil, a great scientist, a religiously theist personality and what not, he can be termed as an ideal person, enviable by all. A leading columnist wrote about Dr. Kalam that “India needs a Kalam in every Institution.” He was directing nd guiding a team of 7000 brilliant, dedicated scientists and researcher at 50 laboratories of the DRDO (Defence Research and Development Organisation).

In his literary pursuit four of Dr. Kalam’s books – “Wings of Fire”, “India 2020-Avision for the New Millennium”, “My journey” and “Ignited Minds-Unleashing the power within Inda” have become household names in India and among the Indian nationals abroad. These books have been translated in many Indian Languages.

India is indebted to Dr. A.P.J. Abdul Kalam and proud of such a brilliant and complete man.

May you rest in peace sir!

Well said, Bala! He was gracious in death as he was in life! RIP, Bharat Ratna - Prof. APJ Kalam!

"Death is sad enough when anticipated, but even worse when unexpected." :'(

Somebody better have a very good reason to downvote this.In my opinion, this is quite rude.

Yeah! Who would want to downvote this

In 2013 I got a chance to meet him at SDTC, he was delivering a speech, such a mystical aura he created there. Although, I didn't get a chance to take an autograph, bur still I remember that day as a cherishable memory of my life RIP sir

I am sure that his dream of the future India will come into reality by the ignited minds of our country.

No one can ever replace his place.

Rest in peace Kalam sir. You stay alive in our dreams, thoughts,and actions. I would be the happiest person if he comes back due to some miracle. We miss you a lot sir.

This is an irreparable loss for India

He is a true Indian

RIP my hero Kalam sir :( .Lucky that I got to meet him 2 years back at the Sharjah University.He had come there to deliver a speech and inspire us ,an auditorium filled with 2500 students,and inspire us he did.I was one of the 48 students who got the chance to chat with him and he advised me on how "Dreams are the most powerful object in the world and with Determination we can make that dream come true".It was one of the best moments of my life.He died doing what he loved doing , interacting with students.He was a legend.

The man who gave India a glimpse of the future of our country who showed the world what India can do.A man who lived his life for others rather than himself is no more.The people of India can't just overcome this disaster.

May his soul Rest In Peace

Great Person ! His quotes & thoughts are an inspiration to the world! We all love you Sir, your dreams & vision for INDIA 2020 has motivated all Indians. He always wanted to be known as a teacher and He still lives as Great teacher with his Great thoughts. We miss you!

I'm sure that He will be very happy to know that all his students love him so much! You're simply Great Sir! Salute to You!

So sorry couldn't got a opportunity to see him live...and chat with him......May his soul rest in peace

RIP Dr Kalam. We all must join together and respect him by fulfilling his dreams (India of 2020). He represented the youth, now it's our duty to represent his work and bring glory to India. Couldn't stop tears flowing out of my eyes.

RIP, Dr A.P.J. Abdul Kalam :( . Every man inspired by you loves you, including me!

True INDIAN its all i would say.

I was gonna meet him up at Ignite this year. :'c So sad I missed my chance.

May his soul rest in peace....

True that.True everything.Only a little sceptic about equipping India with nuclear power. Weapons were never meant for any good and they still aren't......

"The only people who fear death are those with regrets" - Anonymous

At least he died completing his mission, and not keeping it unfulfilled.

Hats off to this scientist. My role model.

Lol I just commented once, that became popukar XD

He set the stage for us Indians to prosper. He sacrificed his life in the making of the stage. The choice is ours whether to show the world the POWER OF INDIA