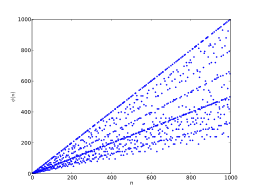 An example of an arithmetic function is the divisor function τ(n), which, for a given positive integer n, returns the number of positive divisors of n. For example, 12's positive divisors are {1,2,3,4,6,12}, so τ(12)=6. On the other hand, any prime number p has only two divisors, 1 and itself, so τ(p)=2 for any prime p. Since the number of divisors of a number is dependent on its prime factorization, which is very irregular, the divisor function is more easily analyzed in terms of its average order logn and its limit superior eγnloglogn.

Like the divisor function, many arithmetic functions can't be expressed by simple formulas. Luckily, number theorists are often less interested in the value of an arithmetic function for any particular input than they are in the behavior of that function on average or in the asymptotic limit. This is partially motivated by historical connections to the prime number theorem as well as proving theoretical guarantees for cryptographic applications, which usually rely on very large numbers to provide security. The two main methods of analyzing arithmetic functions are asymptotic analysis and average order analysis.

Simply put, the asymptotic limit of an arithmetic function f(n) is a function g(n) such that

Intuitively, it is an approximate value of the function for very large inputs. In the case that a function is either too complicated to evaluate directly or the input is too large to compute, the asymptotic analysis provides a way to analyze the essential behavior of the function. The relationship is usually denoted f(n)∼g(n).

For example, the partition function p(n), which counts the number of unique ways of writing an integer n as a sum of positive integers, is most easily defined by the recurrence relation

where p(n)=0 for n≤0 and p(1)=1. This is a difficult function to evaluate exactly for large numbers. Luckily, the asymptotic limit is much simpler to analyze. It is

as x→∞. g(n) is conventionally chosen to be a continuous function and monotonic. Intuitively, it takes the same values as f(n) on average. The average order is not, in general, unique for a given arithmetic function f(n) and often takes a different form than the asymptotic limit.

For example, Euler's totient function φ(n) counts the number of positive integers less than n that are relatively prime to n. It is most easily defined by 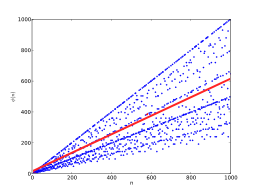 where p∣n denotes "prime p divides n." Since the primes are irregularly spaced, evaluating this formula exactly for large integers n requires either testing whether n is divisible by every prime less than n (there are a huge number of these, by the prime number theorem) or finding the prime factorization for n, which is very difficult. Since finding the exact value of the totient function is not always necessary, sometimes determining the average behavior will suffice. In the case of the totient function,

An arithmetic function f(n) is an additive function if, for coprime a and b,

An arithmetic function f(n) is a completely additive function if, for all positive integers a and b,

An arithmetic function f(n) is a multiplicative function if, for coprime a and b, f(1)=1 and

An arithmetic function f(n) is a completely multiplicative function if, for all positive integers a and b, f(1)=1 and

Because of the coprimality constraint on the definition of additive and multiplicative functions, by the fundamental theorem of arithmetic they are completely determined by their values on prime powers. For example, 90's prime factorization is 21⋅32⋅51. For an additive function f(n), f(90)=f(2)+f(32)+f(5).

an additive function f(n) has the property

and a multiplicative function f(n) has the property

a completely additive function f(n) has the property

and a completely multiplicative function f(n) has the property

In addition, many series over the natural numbers can be simplified when factored into a product over the primes. One example is the Euler product, which expresses a Dirichlet series as an infinite product over the primes, assuming the series terms have certain multiplicative properties. The Euler product is historically important as it was introduced by Leonhard Euler in his proof of the connection between the Riemann zeta function and the prime numbers.

Furthermore, the values of additive or multiplicative functions can be efficiently calculated in computational number theory using memoization for arguments which are smooth numbers. This is especially useful for functions which might otherwise take linear time in naive implementations, such as Euler's totient function, which is a multiplicative function.

The computational convenience of such functions is central to the development of modern cryptographic methods. Specifically, many cryptographic applications rely on using very large numbers (often in the hundreds of digits) to encode information, and their security often depends on the difficulty of inverting the value of certain number theoretic functions. These functions are often chosen to be multiplicative since this allows fast and memory-efficient computation on very large values, crucial to applications such as network encryption. However, because these functions are easy to compute given the prime factorization of a number, they are also relatively easy to invert given the prime factorization. Luckily, determining the prime factorization of a large number is difficult, so cryptographic methods can utilize the strengths of multiplicative functions without succumbing to their weaknesses.