Complexity theory is a central topic in theoretical computer science. It has direct applications to computability theory and uses computation models such as Turing machines to help test complexity. Complexity theory helps computer scientists relate and group problems together into complexity classes. Sometimes, if one problem can be solved, it opens a way to solve other problems in its complexity class. Complexity helps determine the difficulty of a problem, often measured by how much time and space (memory) it takes to solve a particular problem. For example, some problems can be solved in polynomial amounts of time and others take exponential amounts of time, with respect to the input size.

Complexity theory has real world implications too, particularly with algorithm design and analysis. An algorithm can be analyzed in terms of its complexity, this is often described in big-O notation. Often times, programmers want to write efficient algorithms, and being able to tell if an algorithm runs in polynomial time versus exponential time can tell a programmer if his or her algorithm is the best choice or not. Complexity theory has applications for biologists studying neurons, electrical engineers who design hardware, linguists who study languages and grammars, and physicists building quantum computers.[1]

Both in theory and in practice, complexity theory helps computer scientists determine the limits of what computers can and cannot do.

In many cases, problems can be modeled as decision problems which are problems that can be answered with a “yes” or a “no.” For example, “is this number prime?”, “does this graph have a hamiltonian path?” “is there an assignment of variables to the equation such that a set of constraints are satisfied?” Examples of decision problems include the travelling salesperson problem, 3SAT, and primality testing. Decision problems can be simulated on computational models such as Turing machines.

Complexity theory can be one of the more challenging topics in theoretical computer science since it requires a fair amount of background. To really appreciate complexity theory, one should be familiar with the following topics:

Regular languages, context-free grammars, and context-free languages. These topics provide the vocabulary for describing problems that complexity theory deals with.

Turing Machines are the usual model for testing where a problem belongs in the complexity hierarchy, so you should be familiar with how Turing machines are defined and how they work.

Here is a brief overview of complexity classes, find out more on its wiki page. 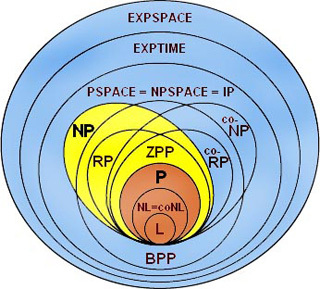 Determining if classes are equivalent rather than just contained in one another is a key problem in theoretical computer science.This image shows the relationships of many popular complexity classes.

In algorithm design and analysis, there are three types of complexity that computer scientists think about: best-case, worst-case, and average-case complexity.

Complexity can describe time and space, this wiki will speak in terms of time complexity, but the same concepts can be applied to space complexity.

Let’s say you are sorting a list of numbers. If the input list is already sorted, your algorithm probably has very little work to do — this could be considered a “best-case” input and would have a very fast running time. Let’s take the same sorting algorithm and give it an input list that is entirely backwards, and every element is out of place. This could be considered a “worst-case” input and would have a very slow running time. Now say you have a random input that is somewhat ordered and somewhat disordered (an average input). This would take the average-case running time.

Answers to these types of questions often have profound implications for theoretical computer science and real world applications. For example, if P were proven to be equal to NP, most of our security algorithms, like RSA, would be incredibly easy to break.

To “test” a problem’s complexity, computer scientists will try to solve the problem on a Turing machine and see how many steps (time complexity) and how much tape (space complexity) it requires to decide a problem.

The running time of a particular problem, like the traveling salesperson problem, may depend on the particular instance. For example, larger instances may require more time to solve. This is why the complexity of a given problem is calculated as a function of the size of the particular instance. Usually, the size of the input is measured in bits. In general, complexity theory deals with how algorithms scale with an increase in the input size.[3]. Instances are encoded as strings of bits that follow particular patterns or rules (similar to regular languages and context free languages. The Turing machine will take this problem, modeled as a language, and feed the input to the problem.