Combinatorics is the mathematics of counting and arranging. Of course, most people know how to count, but combinatorics applies mathematical operations to count quantities that are much too large to be counted the conventional way.

Main Articles: Rule of Product and Rule of Sum

The rule of product governs how to count arrangements using multiplication.

What percentage of the first 100 positive integers contains no even digits?

It might seem like the rule of sum would be applicable here, and that the answer would be 7+14=21. However, this would be an error in double counting. One must consider that it's possible for an integer to be divisible both by 7 and 13.

To account for the double counting, this amount is subtracted from the original answer of 21. Thus, there are 20 integers between 1 and 100 that are divisible by 7 or 13. □​

The process of "removing" elements that are double counted is formalized with the principle of inclusion and exclusion. 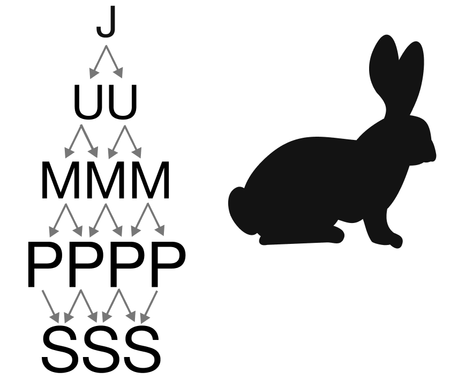 Starting at the "J" and moving down either diagonally left or right each step as shown, how many ways are there to spell the word "JUMPS"?

Note: There are only three S letters in the last row, so the Ps on the far right and left each have only one direction available.

A permutation is an arrangement of objects with regard to order. In combinatorics, the focus is usually on counting the number of elements in a set of permutations.

How many permutations are there of the letters ABC?

There are 6​ permutations. □​

Given a set of n distinct objects, let the set of permutations of those objects be P. Then,

where ! is the factorial operator.

Permutations of a subset of objects can also be considered.

How many permutations are there of 2 letters from ABCD?

There are 12​ permutations. □​

Given a set of n objects, let the set of permutations of k of those objects be S. Then,

If there are 25 railway stations on a railway line, how many types of single second-class tickets must be printed, so as to enable a passenger to travel from one station to another?

A combination is an arrangement of objects without regard to order.

Given a set of n distinct objects, let C be the set of combinations of k of those objects. Then,

where (⋅⋅​) is the binomial coefficient operator.

The binomial coefficient operator received its name because of its application to the binomial theorem below. However, this operator has a wide use for computing numbers of combinations.

How many distinct triangles can be formed from 10 points on a plane, no 3 of which are co-linear?

A bag contains 4 of each color of marble: red, orange, green, blue, and purple. 3 marbles are drawn from the bag (without replacement). If ba​ is the probability that the drawn marbles are different colors, where a and b are coprime positive integers, then what is a+b?

The binomial theorem gives the polynomial expansion of a binomial raised to a positive integer power.

One can establish a bijection between the products of a binomial raised to n and the combinations of n objects. Each product which results in an−kbk corresponds to a combination of k objects out of n objects. Thus, each an−kbk term in the polynomial expansion is derived from the sum of (kn​) products. □​

These are the expansions of (x+y)n for small values of n:

When we look at the coefficients in the expressions above, we find the following pattern:

This is called the Pascal's triangle.

What is the coefficient of the x3y13 term in the polynomial expansion of (x+y)16?

What is the coefficient of the x2y2z2 term in the polynomial expansion of (x+y+z)6?

The principle of inclusion and exclusion describes how to compute the number of elements in intersections and unions of sets.

The principle of inclusion and exclusion gives the size of the set that is divisible by 3, 5, or 7:

Can the figure below be tiled with 1×2 dominoes? 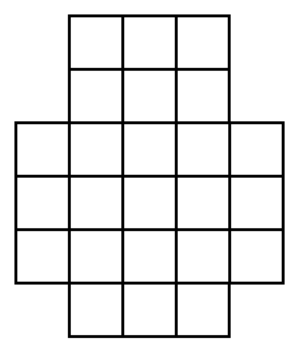 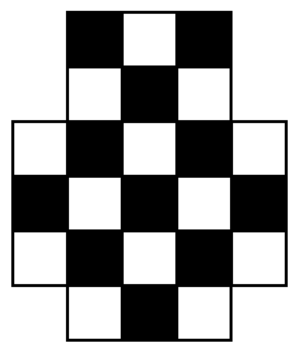 If one attempted to find an arrangement that completely tiles the figure with dominoes, it would seem as though it is not possible. However, testing every possible arrangement would be difficult. Instead, consider a checkerboard coloring scheme.

A 1×2 domino would have a similar coloring—1 black tile and 1 white tile. To tile the figure with dominoes, there would have to be an equal amount of black and white spaces. However, the figure at right contains 11 black tiles and 13 white tiles. Thus, a tiling is not possible. □​ 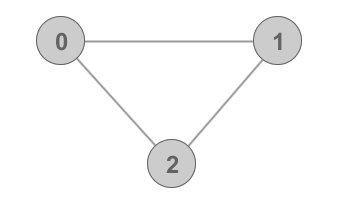 A basic graph of 3-cycle

In combinatorics, one can study the traversals of a graph and the permutations of a graph.

Prove that it is impossible to traverse the following graph by travelling along each path exactly once. Any of the vertices may be selected as the starting vertex or ending vertex, and vertices may be passed more than once. 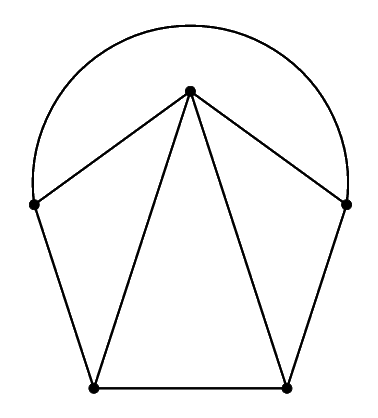 Thus, it is impossible to traverse the above graph by travelling along each path exactly once. □​ 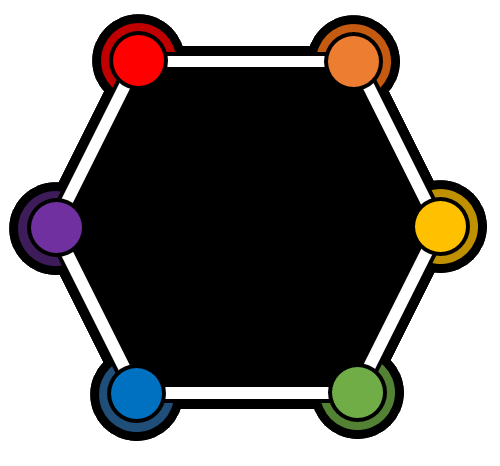 The toy is taken out of its holder, tossed around at random, and then placed back into the holder. What is the probability that the colors now match with the holder?

Note: The hexagon toy can be flipped upside down. The same colors are on the opposite side.

Recursion formalizes the process of recognizing how solutions to smaller cases of a problem can, layer by layer, be built up to solve any case of a problem, no matter how enormous. Recursion is particularly important for developing formulas in combinatorics.

Give an expression for Sn​(n=1,2,3,…), which denotes the number of strings of n characters, consisting solely of A,B, and/or C, that contain no consecutive characters that are the same.

So, S3​=12. It is apparent that the number of strings doubles with each successive character. This is because there are 2 choices for the next character that is not the same as the last character. This can be expressed by the following:

Let Gn​ be the number of such strings of n characters which contain no instance of AB (in that order).

Write a recurrence relation for Gn​.

A distribution of objects into bins is a type of arrangement in which each object in a set is grouped into a bin.

These distinctions create the four types of distributions into bins problems. As with other problems in combinatorics, the concern is usually in counting the number of possible distributions.

In an aquarium, there is a cichlid, tetra, goldfish, and danio. 14 food pellets are dropped into the aquarium. If all pellets are eaten, then how many possible distributions of pellets are there?

In this example, the "bins" are the fish, and the "objects" being distributed are the pellets. Each bin is distinct because it matters which fish gets the pellets. Each object is identical because it doesn't matter which pellets are consumed, only how many are consumed. Note that it is possible for a fish to receive 0 pellets. An effective way to solve an identical objects into distinct bins problem is to apply a stars and bars strategy.

Main Article: Partition of an Integer

A partition of an integer, sometimes referred to simply as a partition, is a sum of positive integers that equals a given integer. In combinatorics, the concern is in counting how many partitions of an integer exist.

How many partitions of 8 are there?

The partitions of 8 are as follows:

Listing out all possible partitions can be a challenge. There is no known closed-form expression for the number of partitions of an integer n. Fortunately, there is a bijection between partitions and distributions of identical objects into identical bins. The same problem-solving approach can be taken.

The pigeonhole principle describes how, given a certain number of bins and a greater number of objects placed into those bins, at least one bin must have more than one object.

5 points are placed within a unit equilateral triangle. Prove that two of those points must be a maximum distance of 21​ from each other. 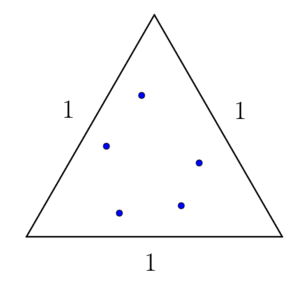 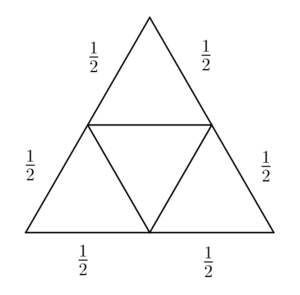 A grid walk is a path that is taken along a graph from a starting node to an ending node. In grid walk problem, the goal is to find the number of possible paths.

Moving only up or to the right, how many possible paths go from the starting node to the finish node? 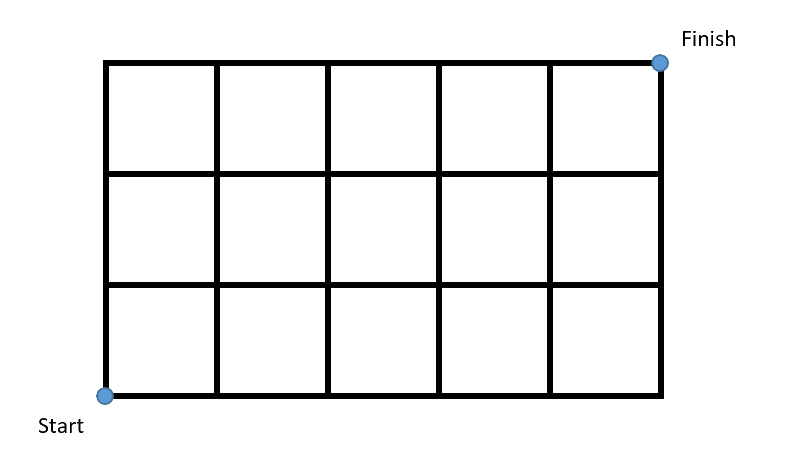